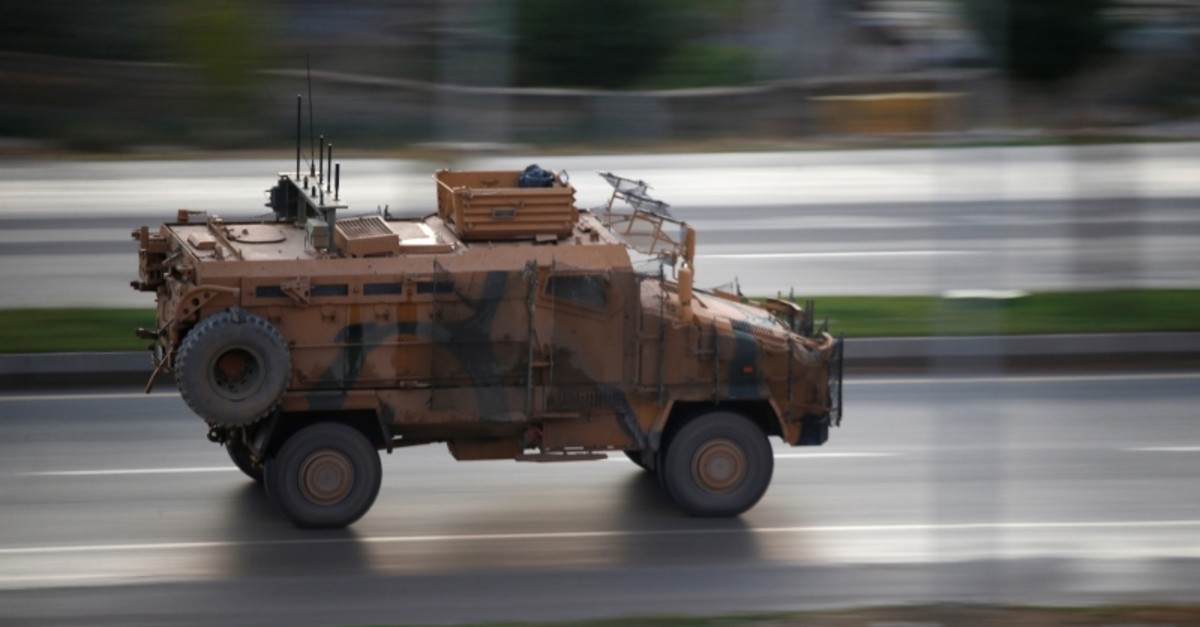 As part of a deal signed between Ankara and Moscow, joint military patrols will begin in the designated safe zone in northern Syria on Friday

Turkish-Russian joint patrols will start in Syria on Friday, President Recep Tayyip Erdoğan said Wednesday, after the Kremlin said People's Protection Units (YPG) terrorists had withdrawn under a deal between Ankara and Moscow.

"We will start the joint work on the ground on Friday, namely we are starting the joint patrols," Erdoğan said.

Under the agreement hammered out in the Russian Black Sea resort of Sochi last week after Turkey's cross-border anti-terror operation in Syria, the YPG terrorists were given a 150-hour deadline, which expired at 1500 GMT Tuesday.

Under the Sochi deal, Turkish and Russian joint patrols were meant to begin after the deadline expired.

Erdoğan said Russian authorities informed Ankara that some 34,000 members of the terror group have withdrawn — together with 3,260 pieces of heavy weaponry — from a zone running 30 kilometers (18 miles) from the Turkish-Syrian border.

"The data we have points to the fact that this wasn't fully achieved," Erdoğan said, referring to the Russian assurances.

"We will give the necessary response after we carry out work in the field," he added.

He again stressed that Turkey "reserves the right to carry out its own operation" if it identifies any YPG terrorists or if its forces come under attack.

"If necessary, we can even expand the planned safe zone area," Erdoğan underlined.

"We sometimes receive questions like what will happen to terrorists who withdraw 30 kilometers away from our border. We will clean the area to the point that there will be no terrorist left," he further said.

Meanwhile, Defense Minister Hulusi Akar said talks between Turkish and Russian officials on developments in northeast Syria have concluded and the two delegations have "largely" reached an agreement.

"Inter-delegation talks with Russia were concluded a short while ago. An agreement was largely reached. Our efforts continue in a mutually constructive, understanding way," Akar said.

"It has been reported by the Russian Federation that the YPG moved 30 kilometers away from the Turkey-Syria border, as well as out of Manbij and Tal Rifat, with their heavy weaponry at the end of the 150-hour deadline," Turkey's Defense Ministry also said in a statement late Tuesday.

On the planned Turkish and Russian joint military patrols, the ministry said they would be conducted west and east from the current reach of Operation Peace Spring, at a depth of 10 kilometers, except for the city of Qamishli.

The statement added that establishing a peace corridor will ensure the voluntary and safe return of Syrian refugees to their home country.

The statement reiterated that Turkey will never allow a terror corridor along its southern border and continue to fight terrorism with full determination.

"Turkey will never allow the formation of a terror corridor south of its borders, and our fight against the terrorist organizations, particularly Daesh and PKK/YPG, will continue with determination," it said.

In its more than 30-year terror campaign against Turkey, the PKK – listed as a terrorist organization by Turkey, the U.S. and the European Union – has been responsible for the deaths of 40,000 people, including women and children. The YPG is the PKK's Syrian offshoot.

"However, we do not trust the terrorists," said Çavuşoğlu at a joint news conference with his Iranian and Russian counterparts in Geneva, shortly after the deadline for the YPG withdrawal expired.

The minister also vowed that Turkey will eliminate any YPG terrorists that remain within the planned safe zone in northeastern Syria after the expiration of the 150-hour deadline agreed upon by Ankara and Moscow.

The Russian side also announced that the deal reached between Turkey and Russia regarding Syria is proceeding smoothly.

Russian Defense Minister Sergey Shoigu announced the "full implementation" of the Russian-Turkish memorandum at a meeting with his Armenian counterpart David Tonoyan in Yerevan.

"The withdrawal of armed units from the territory where the safe corridor is to be created has been completed ahead of schedule. Both Syrian border guards and our military police went there," Shoigu said.

He also praised the experience the Russian military gained in Syria, especially in mine removal.

In a statement following Shoigu's announcement, the Russian Defense Ministry specified that as of Oct. 29, 68 YPG units totaling 34,000 personnel and more than 3,000 units of weapons and military equipment had been pulled back 30 kilometers (18.6 miles) from the contact line with the Turkish Armed Forces.

The ministry said Syrian border guards have organized 84 border checkpoints -- 60 in Qamishli and 24 in Ayn-al Arab.

Russian military police continue their patrols which began on Oct. 23 in the 10-kilometer security zone on the Jerablus-Quran, Qamishli-Fakir and Qamishli-Simalka routes, it added.

The Turkish side is informed on a daily basis about all actions carried out by the Russian side and Syrian armed forces, it said.

Turkish forces captured 18 people, suspected of being part of Assad regime forces, around the northern Syrian town of Ras al-Ayn, the Defense Ministry said on Tuesday, adding the issue was being coordinated with Russian officials.

"Some 18 people from (the Syrian) regime elements were captured alive in the southeast of Ras al-Ayn during search/detection/reconnaissance/security activities. The issue is being examined and coordinated with the authorities of the Russian Federation," the ministry said on Twitter.