Most Israelis in favor of improved ties with Turkey 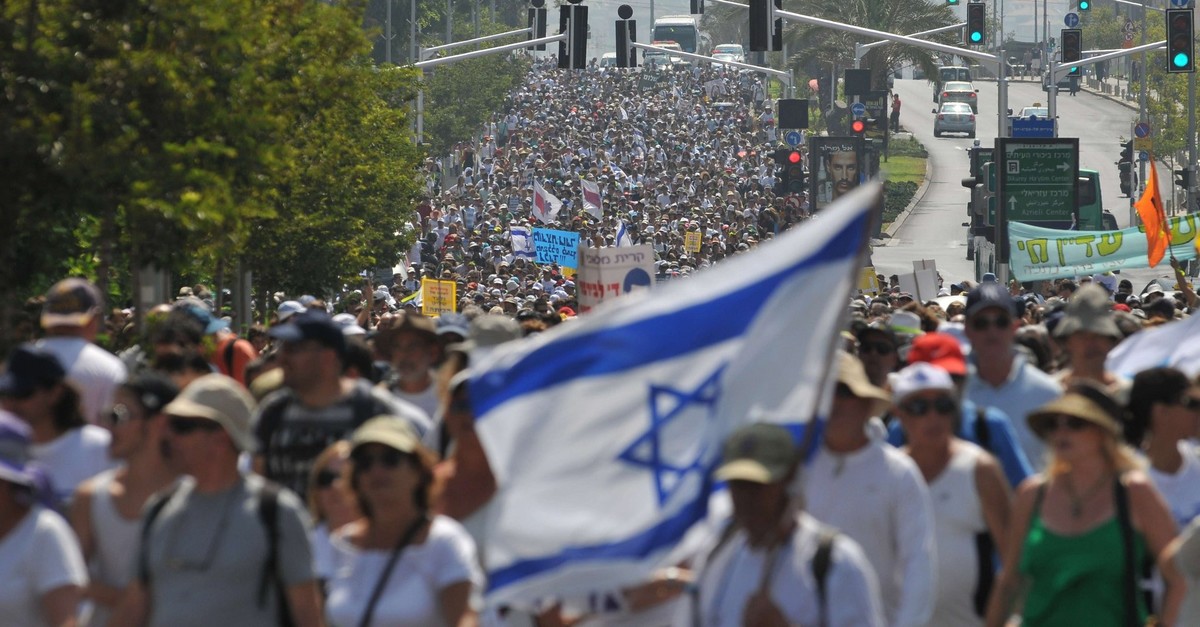 The family of abducted Israeli soldier Gilad Shalit and thousands of supporters march in Tel Aviv on July 5, 2010, on the 9th day of a 200-kilometre (120-mile) solemn protest march (AFP File Photo)
by Daily Sabah Nov 12, 2019 1:15 pm
A majority of the people in Israel believe that Tel Aviv should try to improve its relations with Turkey, a report prepared by the Israeli Institute for Regional Foreign Policies said.
According to the survey entitled “The 2019 Israeli Foreign Policy Index of the Mitvim Institute,” 53% of Israelis are in favor of improved ties with Ankara, an 11% increase when compared to 2018.
Out of this number, 50% of Jewish Israelis and 68% of Arab Israelis said Tel Aviv should seek better ties with Ankara.
The number of those who opposed improved relations with Turkey fell dramatically from 45% to 32% over the past year, the survey results showed, while 15% of the participants expressed “no opinion” on the matter.
Relations between Turkey and Israel drastically declined in 2010 following an Israeli naval raid on a Turkish aid ship, the Mavi Marmara, en route to delivering humanitarian aid to the blockaded Gaza Strip. The raid killed 10 activists.
The event caused an unprecedented crisis in the decades-long peaceful Turkish-Israeli relations. Both countries even recalled their diplomatic envoys following the massacre.
Consequently, the number of Israelis spending their vacations in Turkey followed the political trend. In 2010, 109,000 Israelis visited Turkey. In 2012 and 2013, the Israeli arrivals further dropped and amounted to less than 100,000 per year.
In 2013, with Israeli Prime Minister Benyamin Netanyahu's apology to Turkey and the payment of $20 million compensation to the Mavi Marmara victims, Turkish-Israeli relations entered the normalization period.
In Dec. 2016, both countries re-appointed ambassadors as part of the reconciliation deal and reiterated several times the necessity of further improvements in bilateral relations.
Turkish officials continue to criticize Israel’s policies targeting Palestinians, including illegal settlements in the West Bank and Jerusalem and the humanitarian situation in Gaza.
Turkish citizens have also been complaining about Israel’s arbitrary restrictions on visits. Israel's informal policy of deportation, visa rejection, arbitrary detention and keeping Turkish nationals waiting for no reason at airports have failed to discourage hundreds of visitors.
Meanwhile, the report also covered relations with Palestinians and Arabs and the European Union. While 32% of the participants said another war between Israel and Gaza is “inevitable,” 24% said it was “Avoidable via strengthening Israel’s deterrence,” 17% said it was “Avoidable, via Israeli-Palestinian negotiations” and 14% said it was “Avoidable, via international mediation.”
Regarding the European Union, 45% of the participants said the EU is currently more of a foe than a friend to Israel, while 27% said the opposite. 32% said Israel belongs in the Middle East, while 27% said it belongs more in Europe, and 21% said it belongs more in the Mediterranean Basin.
Last Update: Dec 20, 2019 1:38 am
RELATED TOPICS