Despite attempts to harm ties, Turkey-U.S. relations improving via constructive efforts of leaders 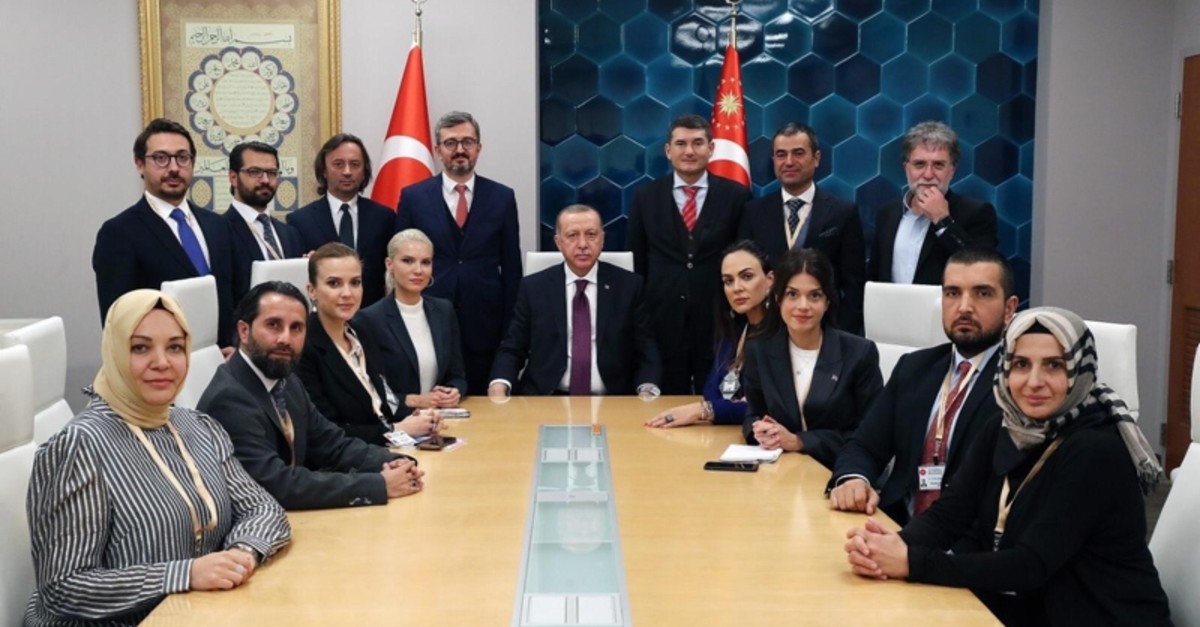 Turkish-U.S. ties are seeing a positive momentum despite the efforts of outside actors to harm them, thanks to the constructive approaches of the two countries’ leaders, President Recep Tayyip Erdoğan said Thursday.

Responding to questions by journalists on his return from the U.S., Erdoğan said that although there are some circles that aim to damage the ties between the two countries, his U.S. counterpart Donald Trump is making a sincere effort to come up with solutions to the existing disagreements.

“I can say that Mr. Trump is sincerely trying to come up with solutions to the problems between the two countries that are respectful to the both sides and national interests. However, I can also say that some circles that are against Trump are trying hard to harm our relations,” the president added. The president highlighted that the key to overcoming the differences in opinions is to have a healthy dialogue based on information and facts.

Erdoğan was in Washington D.C. for two days. During his visit to the NATO ally country, the president had a bilateral meeting with Trump, as well as side meetings with different delegations and U.S. senators. Regarding the content of their meetings in the U.S., Erdoğan said that the major topics were the developments in Syria, the withdrawal of the PKK’s Syrian affiliate the People’s Protection Units (YPG), the fight against Daesh, the establishment of the Syrian safe zone, the S-400 missile purchase, the NATO alliance and the presence of the Gülenist Terror Group (FETÖ) in the U.S.
Booklets provided for senators, proving PKK, FETÖ crimes

Explaining that the booklets regarding the crimes of the FETÖ and PKK terrorists have been provided to U.S. senators during the meeting, Erdoğan said that a video also has been shown to both the senators and Trump.

“In my view, the biggest mood change after watching the video occurred in the president. He was touched quite a bit,” he said. According to Erdoğan, however, the others are still trying to back the terrorists, especially Ferhat Abdi Şahin, code-named Mazloum Kobani, a senior PKK terrorist that is wanted by Turkey. The president added that they also presented a document prepared by the CIA that is full of evidence showing who Şahin really is.

“The biggest thing is the fact that they are still seeing the case as if Turks are against the Kurds,” the president said as he expressed his surprise, mentioning that there are 50 Kurdish deputies in Turkish Parliament as one of the thousands of pieces of evidence that prove there is no such thing. He also added that during the ruling Justice and Development Party (AK Party) era, there have been major transformations and improvements in the eastern provinces of Turkey where the Kurds are mostly living.
Şahin is the commander-in-chief of the so-called Syrian Democratic Forces (SDF), which is dominated by the YPG. Interpol currently has a Red Notice warrant out in Şahin's name for playing a crucial leadership role in the YPG.
The YPG is the Syrian offshoot of the PKK terror group, which for more than 30 years has been responsible for the deaths of nearly 40,000 people in Turkey, including many children, women and infants. The YPG has been receiving U.S. backing under the pretext of fighting Daesh, although Ankara has been objecting to Washington's stance, saying that using one terror group to fight another makes no sense.
Safe zone to enable Syrians to return home
Erdoğan said that the biggest issue for Turkey when it comes to Syria is to enable the Syrian refugees to return to their homes. He added that the major point is to provide security in an area with the depth of 20 miles (32 kilometers).
“Mr. Trump mentioned it to us as 444 kilometers in width. Right now, we have taken the 120 kilometer-long area between Tal Abyad and Ras al-Ayn,” he said, adding that Trump welcomed the idea of a safe zone.
“He told me that he has mentioned the issue to the European countries as well,” Erdoğan said, adding that he himself will also bring the issue to the table during the NATO leaders meeting on Dec. 3-4.
“We will see how the NATO countries will react to the safe zone issue,” he expressed.
“As Turkey, we have already done what we can do. If we can have something out of NATO donors meeting, we can take the first steps regarding the peace corridor,” the president said.
Erdoğan also explained his vision for the safe zone, saying that there will be houses, health centers, schools and civic centers for the public.
“We want Syrians to be saved from harsh conditions and let them have a peaceful life in their own lands,” he said, adding that although Trump did not make clear how much the U.S. will contribute to the safe zone, he will be following the issue.
According to the safe zone plan, 140 villages and 10 district centers will be established within the 30-40 kilometer deep safe zone in northern Syria, housing 5,000 and 30,000 inhabitants each, respectively. The settlements will be provided with various facilities so that the people living there will be able to have a normal life with every necessity met. Each village will have 1,000 houses, and each district will have 6,000 new homes built, making 200,000 new residences in total. The construction is expected to cost about $26.6 billion.
Each household in villages will have its own farmland, and the whole residential area in the safe zone will have 11 mosques, nine schools, five youth centers and two indoor sports halls will be built to accommodate all the needs of the Syrians resettling in the area. Eight districts will have clinics with 10 beds for inpatient treatment, whereas two districts will have a capacity of 200 beds. Establishing an industrial site is also among the plans.
The president added that, if necessary, Turkey would offer both the U.S. and Russia use of the oil revenues in Syria for the construction of the safe zone.
U.S. still protects FETÖ

Responding to a question as to whether or not he observed any change in the U.S. approach toward the FETÖ terrorists, Erdoğan said that he talked about the issue with the senators and saw that they are still not at the level that Turkey desires.

“We, once again, provided all the files that are full of legal evidence [against the FETÖ]. The dialogue between the justice ministries of the two countries still continues and will continue. We will follow the case as it goes,” he said.
FETÖ has a considerable presence abroad, particularly in the U.S., including private schools that serve as a revenue stream for the terror group. The U.S. is home to a large community of Gülenists, including group leader Fetullah Gülen. Gülen has lived in self-imposed exile on a secluded compound in the U.S. state of Pennsylvania since 1999. The United States is the target of most extradition requests. Turkey has sent seven extradition requests for Gülen to Washington but has seen little progress in his extradition.
The president also said that one of the major topics during the meeting between the delegations was the trade volume between the two countries, where the aim is to reach a goal of $100 billion. The efforts to take advantage of the huge economic potential between the two NATO allies have been accelerated particularly after the meeting between Erdoğan and Trump at the G20 leaders summit in Osaka, Japan in late June. During the meeting, Trump proposed that both countries should aim for $100 billion in bilateral trade. The figure was revised up from the $75 billion target set by the two leaders in February.
Joint work to be established to find solution to S-400 crisis

Regarding the purchase of the S-400 missiles from Russia, Erdoğan said that despite having a strong army already, there is still room for improvement that necessitates the purchase of such defense systems.

“We have the second-biggest army in NATO and has strong ties with the U.S. Still, we need to diversify our defense sources for our national interests,” he said, adding that he informed the U.S. that Turkey is still willing to buy the Patriots as well.

“Yet,” he added, “it is not acceptable for us to remove the S-400 missiles completely while purchasing Patriots since it is a demand that is violating our sovereignty.”

He further pointed out that when other NATO member countries, such as Greece, made similar purchases, no one, including the U.S., expressed any concerns. Currently, Greece has S-300 missiles purchased from Russia. Still, Erdoğan expressed that Turkey has a constructive attitude toward the process and offered to have a joint work at the level of defense ministers over coming up with a solution to the problem.

“They claim that S-400 missiles are not compatible with the F-35. Well, you already do not sell us the F-35 [so we don’t have it],” said Erdoğan, questioning the absurdity in the U.S.’ approach to the issue.

“I have reminded Mr. Trump that we are not the consumers of the F-35 program, but partners in it,” Erdoğan said, adding that Turkey has already paid $1.4 billion of the $2.4 billion price of the F-35 jets. Still, according to Erdoğan, the U.S.’, especially Trump’s, attitude on the issue was much more positive and solution-focused than the previous meetings.
U.S. officials urged Turkey to buy U.S. Patriot missiles, arguing the Russian system would be incompatible with NATO systems, expose the F-35s to possible Russian subterfuge, and could trigger sanctions. Following protracted efforts to purchase an air defense system from the U.S. with no success, Ankara decided in 2017 to purchase the Russian S-400s. Turkey, however, emphasized the S-400 would not be integrated into NATO systems and would not pose a threat to the alliance.

The president reiterated that no matter what, it is not an option for Turkey to deactivate the S-400 missiles. Touching upon the importance of the bilateral ties with Russia, which is quite strategic for Turkey, Erdoğan said that there are lots of layers to the relations that should be considered when mentioning the purchase of S-400 missiles. He gave the examples of the matters of the natural gas, Turk Stream and tourism, saying that these cannot be overturned by cancelling S-400 purchase.

“Russia is currently our number one partner in tourism. Last year, 6.5 million tourists came from Russia. Maybe, this number will increase this year. We have the trade volume that is approaching to $30 billion. Last year it was $25 billion,” Erdoğan continued his examples. He also recalled that NATO expressed approval over the S-400 purchase.

The president highlighted that both Russia and the U.S. are close allies of Turkey and the country is determined to keep the ties in this way.