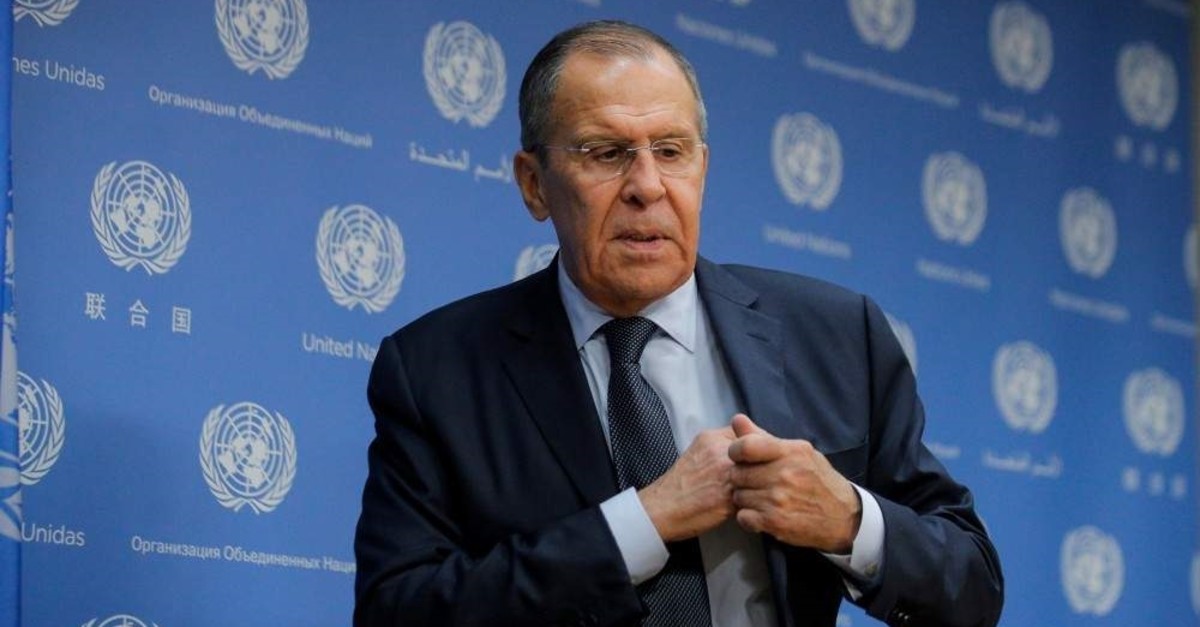 Sergey Lavrov gestures at a news conference on the sidelines of the 74th session of the United Nations General Assembly at U.N. headquarters in New York (Reuters Photo)
by Daily Sabah with Agencies Nov 20, 2019 3:32 pm
Russia's belief that Turkey had been considering resuming its operation in northern Syria was a "misunderstanding," Russia's top diplomat, Sergey Lavrov, said Wednesday.
Turkey informed Russia's ambassador in Ankara that there was no talk of a resumption of Turkey's Operation Peace Spring, Lavrov said in comments carried by the Russian news agency Interfax.
Lavrov told reporters that the withdrawal of the People's Protection Units (YPG) has been "practically completed" adding: "There are maybe some individual areas where this matter still needs to be finished."
Lavrov criticized the YPG for having sought protection from the United States, arguing that they must engage in direct dialogue with the Bashar Assad regime, which Russia supports.
There have been dozens of attacks by YPG forces in Syria. Turkey and Russia have completed eight joint patrols in the region following the completion of the 150-hour withdrawal period as per the deal.
Turkey launched Operation Peace Spring, the third in a series of cross-border anti-terror operations in northern Syria targeting terrorists affiliated with Daesh and the PKK's Syrian offshoot the YPG, on Oct. 9.
The operation, conducted in line with the country's right to self-defense borne out of international law and U.N. Security Council resolutions, aims to establish a terror-free safe zone for Syrians return in the area east of the Euphrates River controlled by the U.S.-backed Syrian Democratic Forces (SDF), which is dominated by YPG terrorists.
Ankara agreed with Washington on Oct. 17 to pause its operation to allow the YPG/PKK terrorists to withdraw from the planned safe zone.
On Oct. 22, Ankara and Moscow reached a deal under which YPG/PKK terrorists were to pull back 30 kilometers south of Turkey's border with Syria within 150 hours, and security forces from Turkey and Russia would mount joint patrols there.
The PKK, listed as a terrorist organization by Turkey, the U.S. and the European Union, has waged a terror campaign against Turkey for more than 30 years, resulting in the deaths of nearly 40,000 people, including women, children and infants.
Last Update: Dec 20, 2019 1:49 am
RELATED TOPICS