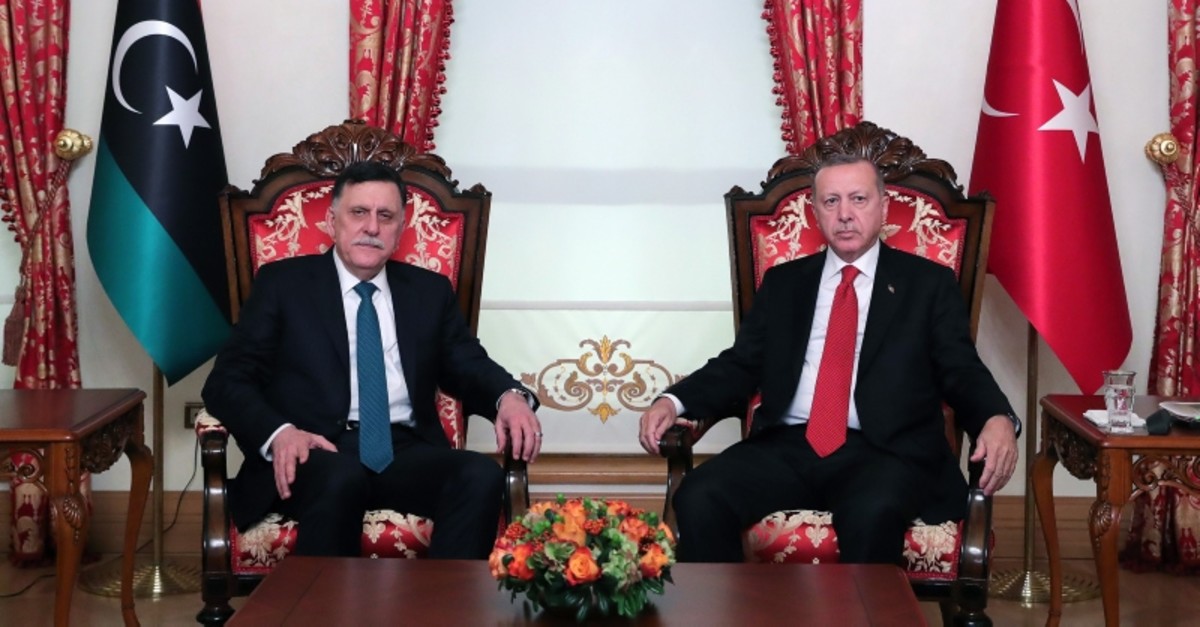 Turkey protects its rights provided by international law in the Mediterranean thanks to a deal signed with Libya, determining the limitation of the maritime jurisdiction of both countries

Turkey and Libya signed two separate deals on Wednesday following a meeting between President Recep Tayyip Erdoğan and the head of the Presidential Council of Libya’s U.N.-backed Government of National Accord (GNA), Fayez Al Sarraj, in Istanbul. One of the deals was critically important as it enabled Turkey to secure its rights in the Mediterranean while preventing any fait accompli by other regional states.

According to a statement released by the Presidential Directorate of Communications, the two countries signed two deals following the two-hour meeting between the leaders. The first memorandum of agreement regards security and military cooperation, while the second regards the limitation of maritime jurisdiction. These two agreements aim to strengthen cooperation and ties between the two countries, the statement said.

“Today’s security and military cooperation agreement with the National Government of Accord in Libya is a broader version of our previous military cooperation framework agreement. This has been at the top of our agenda to support security and peace in Libya,” Communications Director Fahrettin Altun said following the signing of the deals. Sending a series of tweets from his official Twitter account, Altun said the agreement establishes “training and education, structures the legal framework, and strengthens the ties between our militaries.”

“We are confident we will improve the security situation for the Libyan people together,” he added.
Stability in Libya crucial

Altun also urged other actors to follow in Turkey's footsteps in offering support to the Libyan government.

“Stability of Libya is critically important for the safety of Libyans, regional stability and prevention of international terrorism. By cooperating closely with the Government of National Accord, Turkey will continue assisting Libya in all areas,” he said, adding that Turkey will also continue advocating for a political solution to build a democratic, stable and prosperous Libya.
The Turkey-Libya memorandum of understanding on maritime delimitation has provided a legal framework to prevent any fait accompli by regional states. Accordingly, the attempts by the Greek government to appropriate part of the continental shelf that belongs to Libya, which is approximately 39,000 square meters in area, since 2011 by exploiting the political crisis in the North African country have been averted.
The agreement also confirmed that Turkey and Libya are now maritime neighbors. The delimitation starts from Turkey’s southwestern coast of Fethiye-Marmaris-Kaş and extends to the Derna-Tobruk-Bordia coastline of Libya.
The maritime delimitation agreement also recognizes Turkey’s rights in its exclusive economic zone (EEZ) extending into the southeast of the island of Crete, thwarting any illegal attempts to confine the country’s EEZ in the Mediterranean into an area of 41,000 square meters.
Consequently, the agreement also pushes other regional actors – Israel, Egypt, the Greek Cypriot administration, Greece and European Union (EU) states – to negotiate with Turkey for any pipeline project to carry Eastern Mediterranean natural gas to European markets. The proposed route for this pipeline passes through Turkey’s EEZ, which is again marked through the agreement inked with the U.N.-backed government in Tripoli. In March 2019, Israel, Greece and the Greek Cypriot government signed a deal on the proposed EastMed pipeline in Tel Aviv with the participation of U.S. Secretary of State Mike Pompeo. It is estimated that the $7 billion project will take several years to complete and deliver 10 billion cubic meters of gas per year.

Libya has remained dogged by turmoil since 2011 when a NATO-backed uprising led to the ouster and death of former President Moammar Gadhafi after more than four decades in power.

Since then, Libya's stark political divisions have yielded two rival seats of power, one in Tobruk and another in Tripoli, and a host of heavily armed militia groups. The military, pushed by Khalifa Haftar's army, allied with a parallel eastern administration based in Benghazi, marking a dangerous escalation of a power struggle that has dragged on since Gadhafi's overthrow.

Haftar is not recognized by the international community, as the elected parliament of the country is centered in Tripoli. However, Haftar, with the financial and political support of certain countries, including some Gulf states, has appeared as an influential actor in the war-torn country.

The Libyan conflict has also drawn in a range of regional and international actors who are all competing for influence. Since the country has become the power projection stage for several regional and international actors, there has been a heated exchange of accusations.
Turkey in favor of fair share
Meanwhile, speaking on the issue yesterday, Foreign Minister Mevlüt Çavuşoğlu said that Turkey has the right to have negotiations with every country when it comes to the jurisdiction areas in Mediterranean.
Stating that the talks with Libya also took place in this respect, Çavuşoğlu said that these deals mean that Turkey protects its rights under international law in the region. He added that in the upcoming period, similar deals may be done with other Mediterranean countries as well.
“Although right now it does not seem possible to have such deals with some countries, in future it may be possible,” he said.
“We [as Turkey] always have the intention to share the richness of areas like the Mediterranean and Aegean fairly while protecting our rights provided by international law. This is also valid for the reserves in Cyprus,” he said.
Turkey, as a guarantor nation to the Turkish Republic of Northern Cyprus (TRNC) and supporter of its right to Eastern Mediterranean resources, is currently conducting hydrocarbon exploration with its drilling vessels the Fatih and Yavuz, along with the country's two other seismic vessels.
Greek Cyprus unilaterally declared a total of 13 so-called parcels in the Eastern Mediterranean as its Exclusive Economic Zone (EEZ) and allowed international oil and drilling companies to operate in these areas, which are anticipated to hold rich hydrocarbon reserves.
However, the majority of these parcels clash with the EEZ declared by the TRNC, with the Greek Cypriot administration ignoring the fundamental right of the TRNC to a share of the island's resources. Turkey has consistently contested the Greek Cypriot administration's unilateral drilling in the Eastern Mediterranean, asserting that the TRNC also has rights to the resources in the area. The unilaterally declared EEZ of the Greek Cypriot administration violates part of Turkey's continental shelf, particularly in Blocks 1, 4, 5, 6 and 7.