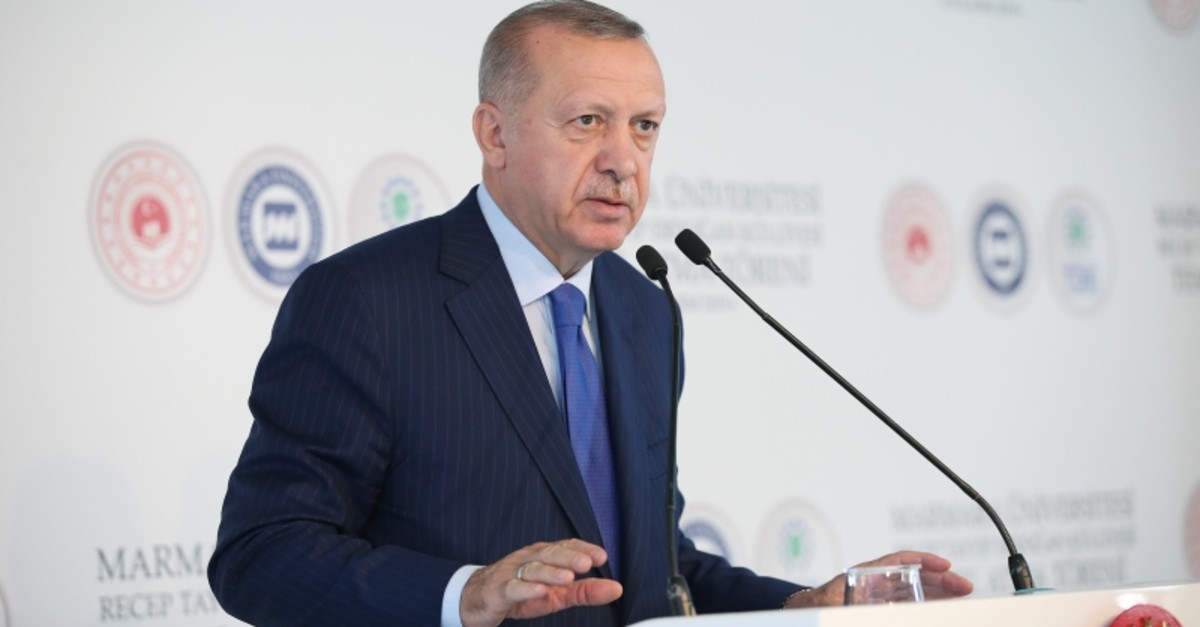 President Recep Tayyip Erdoğan lashed out on Friday at French counterpart Emmanuel Macron for saying Turkey should not expect NATO support for its anti-terror operation in northern Syria, saying it was the French president who was suffering "brain death.”

"I am talking to France's President Emmanuel Macron, and I will also say this at NATO. First of all, have your own brain death checked. These statements are suitable only to people like you who are in a state of brain death," Erdoğan said in a televised speech.

Macron's comments on NATO reflect "shallow" understanding, the president said.
Speaking at the groundbreaking ceremony of Recep Tayyip Erdoğan Complex at Istanbul's Marmara University, Erdoğan said France has no right and authority to be in Syria.
"The [Syrian] regime also hasn't invited you there," Erdoğan said, addressing the French leader.
"To remove or not to remove Turkey from NATO ... Do you have the authority to make such a decision?" Erdoğan added.
The president also said that Turkey "will not hesitate" to carry out Operation Peace Spring, "if the threats to Turkey from the safe zone and beyond cannot be eliminated within a reasonable time."

"Every responsible member state and their leaders need to bring their suggestions for reform while pursuing common interest and security for all," he said, adding that NATO can be more relevant and effective if its members work together.

He added that at every NATO leaders' summit, Turkey puts forth recommendations and calls on its fellow members to understand Turkey's national security concerns.

"As a staunch member continuing to perform our duties for the alliance, we will seek to improve the effectiveness and relevance of NATO," Altun said.

Under two separate deals with the U.S. and Russia, Turkey paused the operation to allow the withdrawal of YPG/PKK terrorists from the planned Syria safe zone.

But the terrorists have failed to withdraw from some areas and continue to attack both soldiers and civilians.