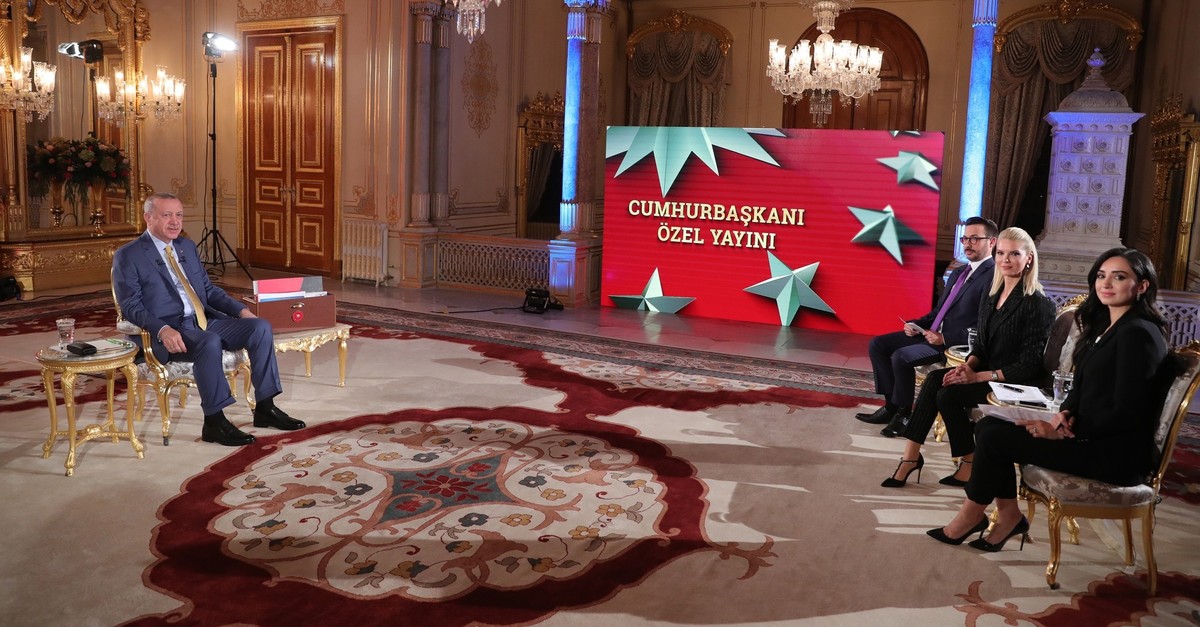 The TRT live broadcast (IHA Photo)
by daily sabah
Dec 09, 2019 11:09 pm
"Turkey used its rights originating from international law in the Libya deal; Greece, Israel, Egypt and the Greek Cypriot administration cannot act without our approval," President Recep Tayyip Erdoğan said late Monday in a live broadcast regarding Turkey's maritime agreement with Libya that secures Ankara’s rights over a portion of the Eastern Mediterranean.
"The reason why Greece has gone berserk is because its hands are tied over the Turkey-Libya deal, the expulsion of the ambassador is an international scandal," Erdoğan added, responding to Greece's reaction to the deal.
Explaining that Turkey is ready to give Libya "any kind of assistance" it needs, he said, "If Libya wants Turkey to send troops, we will decide on our own and won't ask anyone for permission."
Criticizing the administration of Abdel-Fattah el-Sissi, Erdoğan said that Egypt has been violating U.N. resolutions with its support to Khalifa Haftar in Libya.
On Nov. 27, Turkey and Libya's Tripoli-based Government of National Accord (GNA) signed a bilateral memorandum after a meeting between President Erdoğan and GNA head Fayez Al Sarraj took place in Istanbul.
The deal enables Turkey to secure its rights in the Mediterranean while preventing any fait accompli maneuvers by other regional states.
According to the U.N. Convention on the Law of the Sea, while a country is able to stretch its territorial waters only 12 nautical miles out to sea, when it comes to the exclusive economic zone, where it has the rights to fishing, mining and drilling, the area can extend for an additional 200 miles.
However, if the maritime distance between the two countries is less than 424 miles, a bilateral deal is needed to determine a mutually agreed-upon dividing line for their respective exclusive economic zones.
Turkey has the longest shoreline in the Eastern Mediterranean, making it a natural candidate for seeking reserves in the region in accordance with international law.
The presence of the Turkish Cypriot government in Northern Cyprus also strengthens Turkey's hand. The country defends the rights of Turkish Cypriots in the region and insists that their consent is needed for any type of drilling activity.
Erdoğan also touched upon Turkey's relations with NATO.
"Turkey calls on NATO to live up to its founding values, we have never turned a deaf ear to any members' concerns so far. Accordingly, other NATO members should not neglect Turkey's concerns," the president said regarding the country's relations with the military alliance.
On another note, Erdoğan also addressed the economic situation in Turkey.
Saying that they are back on track, he explained, "Turkey's economy has entered a recovery period. We will see single-digit inflation and interest rates in 2020."

After three consecutive quarters of contraction that followed turmoil and high volatility in exchange rates as of the second half of last year that pushed up inflation and interest rates while domestic demand tumbled, the Turkish economy has entered a promising era of growth in the third quarter of this year.