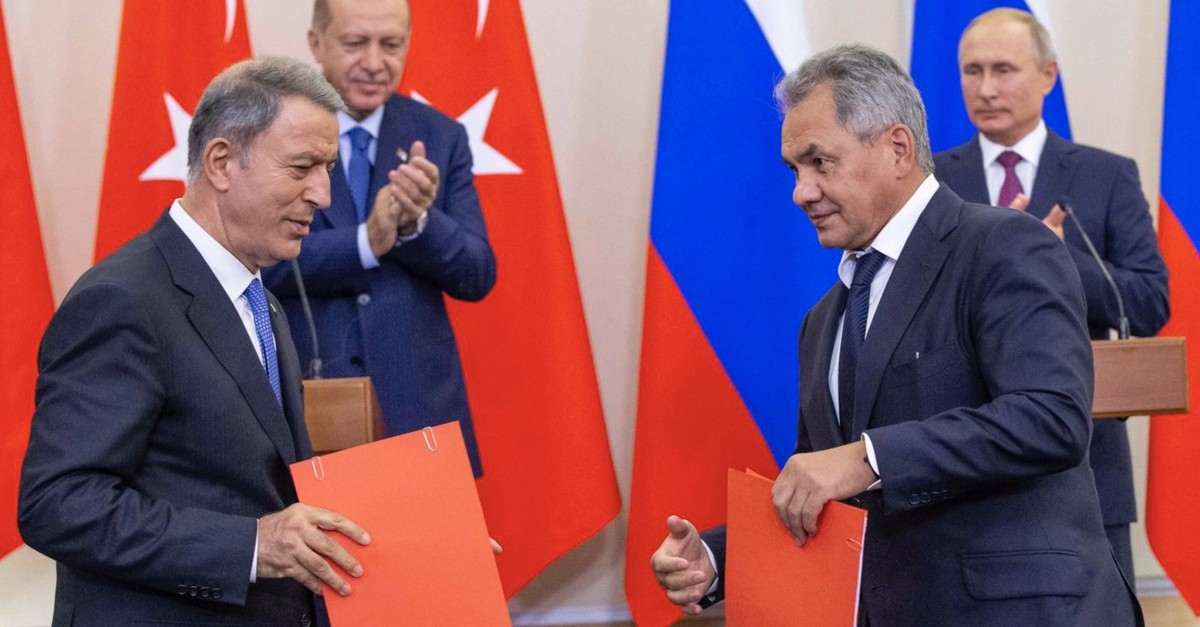 | AA Photo
by Daily Sabah with AA Dec 10, 2019 2:08 pm
Defense Minister Hulusi Akar and his Russian counterpart Sergei Shoigu discussed the latest situation and developments in the Middle East, especially in Syra, in a phone call, the Russian Defense Ministry said late Monday.
The two ministers paid particular attention to the implementation of the Russian-Turkish memorandum on Syria, the ministry said in a statement.
"The parties discussed the situation in the Middle East region, paying special attention to the implementation of the Russian-Turkish memorandum of understanding on the settlement of the situation in the northeast of the Syrian Arab Republic and measures taken to stabilize the situation in the Idlib de-escalation zone," it said.
On Oct. 22, President Recep Tayyip Erdoğan and his Russian counterpart Vladimir Putin signed a deal under which the PKK-linked People’s Protection Units (YPG) terrorists would pull back 30 kilometers (18.6 miles) south of Turkey's border with northern Syria and security forces from Turkey and Russia would conduct joint patrols 10 kilometers (6.2 miles) from the Turkish border.
Turkey and Russia also agreed last year to turn Idlib into a de-escalation zone where acts of aggression were expressly prohibited.
The Syrian regime and its allies, however, have consistently broken the terms of the cease-fire, launching frequent attacks inside the zone.
The de-escalation zone is currently home to some 4 million civilians, including hundreds of thousands displaced in recent years by regime forces from throughout the war-weary country.
In its more than 30-year terror campaign against Turkey, the PKK – listed as a terrorist organization by Turkey, the U.S. and the European Union – has been responsible for the deaths of 40,000 people, including women, children and infants. The YPG is the Syrian offshoot of the PKK.
Last Update: Dec 20, 2019 2:17 am
RELATED TOPICS