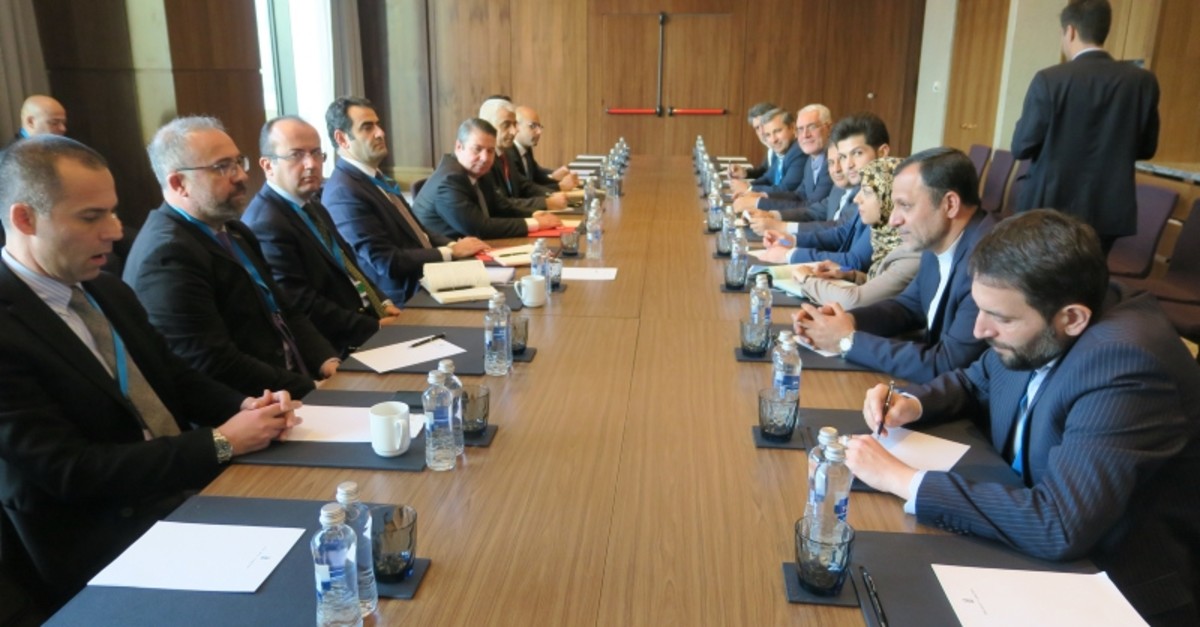 The parties attending the 14th round of high-level meetings on Syria have emphasized the importance of fully implementing the Turkey-Russia deal in northeastern Syria.
Representative delegations of guarantor states in the Astana peace process, namely Turkey, Russia and Iran, met for the 14th round of peace talks in the Kazakh capital Nur-Sultan, formerly Astana, on Dec. 10-11. They discussed developments on the ground, particularly the eastern parts of the Euphrates River and Idlib as well as the current state of affairs in the political process.
At the end of the meetings, participants agreed to reject all attempts that threaten Syria’s territorial integrity and the national security of neighboring countries while objecting all attempts to create new realities on the ground under the pretext of combating terrorism, including illegitimate self-rule initiatives.
They also expressed opposition to illegal seizure and transfer of oil revenues and emphasized the importance of fully implementing the memorandum of understanding that was signed on Oct. 22, 2019, between Turkey and Russia to stabilize the situation east of the Euphrates, the Foreign Ministry said in a statement Wednesday.
On Oct. 9, Turkey launched Operation Peace Spring to eliminate terrorists from northern Syria, east of the Euphrates River in order to secure Turkey's borders, aid in the safe return of Syrian refugees, and ensure Syria's territorial integrity.
On Oct. 22, President Recep Tayyip Erdoğan and his Russian counterpart Vladimir Putin signed a deal under which PKK-linked terrorists will pull back 30 kilometers (18.6 miles) south of Turkey's border with northern Syria, and security forces from Turkey and Russia will conduct joint patrols 10 kilometers (6.2 miles) from the Turkish border.


“The parties have reiterated their commitment in re-establishing calm in Idlib and in preserving the de-escalation status of the area,” the statement read. It added that they also expressed concern about the civilian casualties and agreed to shore up efforts to ensure civilian security.
The Turkish side also expressed concern over the Assad regime’s attacks targeting civilians and residential places, the statement said.
The Sochi deal between Ankara and Moscow was signed last September to provide peace and stability in the northwestern province of Idlib and establish de-escalation zones in the area.
Following eight months of relative calm provided by the deal, the regime intensified attacks on April 26 under the pretext of fighting the al-Qaida-linked Hayat Tahrir al-Sham (HTS) terrorists holed up in Idlib. The situation has deteriorated since, claiming more civilian lives with every passing day.
Turkey, which hosts nearly 3.6 million refugees from Syria, has voiced concerns with the international community and regional countries that further offensives could trigger a fresh refugee wave toward the West.
Since the Russia-backed regime forces intensified attacks on Idlib in April, almost 1,300 civilians have lost their lives and more than 1 million people fled to areas near the Turkish border.
Another important topic of the meeting was the convening of the Syrian Constitutional Committee in Geneva. All participants reiterated their continued support to the sustainability of the committee’s work.
“Turkey has confirmed its support for the ongoing efforts to enhance the political process, in close coordination with the Syrian opposition and the U.N. Turkey underscored the expectation from the Astana guarantors to ensure constructive stance by the regime for the functioning of the constitutional committee in accordance with its mandate agreed by the Syrian parties,” the Foreign Ministry said, adding, “Turkey has stressed its expectation to respect the working group’s rules of procedure for future operations of mutual and simultaneous release of persons detained by the opposition groups and the regime.”
The Working Group on the Release of Detainees/Abductees, Handover of Bodies and Identification of Missing Persons has also convened in the margins of the meeting.
Astana Process
The Astana meeting was initiated by Turkey, Iran and Russia to bring the warring sides together and find a permanent solution for the eight-year Syrian civil war. The main agenda of the process has focused on the constitutional process, political transition, security and resettlement. The first meeting of the Astana process was in Turkey in January 2017 to facilitate U.N.-sponsored peace talks in Geneva.
The constitutional committee, including representatives from the opposition, the regime and guarantor countries, is tasked with writing and establishing Syria's post-war constitution, which is seen as a stepping-stone to elections in the war-torn country. The functioning of the committee, however, faces strong resistance from the Bashar Assad regime.
The 150-member committee includes a 50-member delegation from the regime and a 50-member delegation from the opposition. The Syrian regime has objected to the 50 members of the committee representing civil society, experts, independents, tribal leaders and women.
As the committee began its work on Nov. 20 in Geneva with U.N. facilitation to prepare and draft for popular approval of constitutional reforms paving the way for a political settlement in Syria, the Assad regime delegation left on the first day of the second round of talks.
During the previous rounds of Astana talks, the three countries agreed on several topics and implemented them. They decided to strengthen the mechanism established to ensure monitoring of the implementation of the cease-fire in Syria and to create tension zones where the conflict is most intense between the opposition and regime forces.
A joint working group formed by the Astana trio and the U.N. would investigate the fate of missing people and the release of those who have been detained. It has already overseen several detainee swap deals.
Russia, Turkey see stabilization in North Syria
Speaking to reporters in Nur-Sultan on the sidelines of a regular meeting of the Astana peace talks on Syria, Russia's presidential envoy for Syria Alexandre Lavrentyev said that Russia and Turkey achieved stabilization in northern Syria under a bilateral deal.
"The situation in northeastern Syria in the wake of the implementation of the Russia-Turkey memorandum was discussed at the meeting in Nur-Sultan. We see stabilization in northeastern Syria. I think the Russian and Turkish sides are satisfied with the development of the situation,” Lavrentyev told.
Last Update: Dec 20, 2019 2:18 am