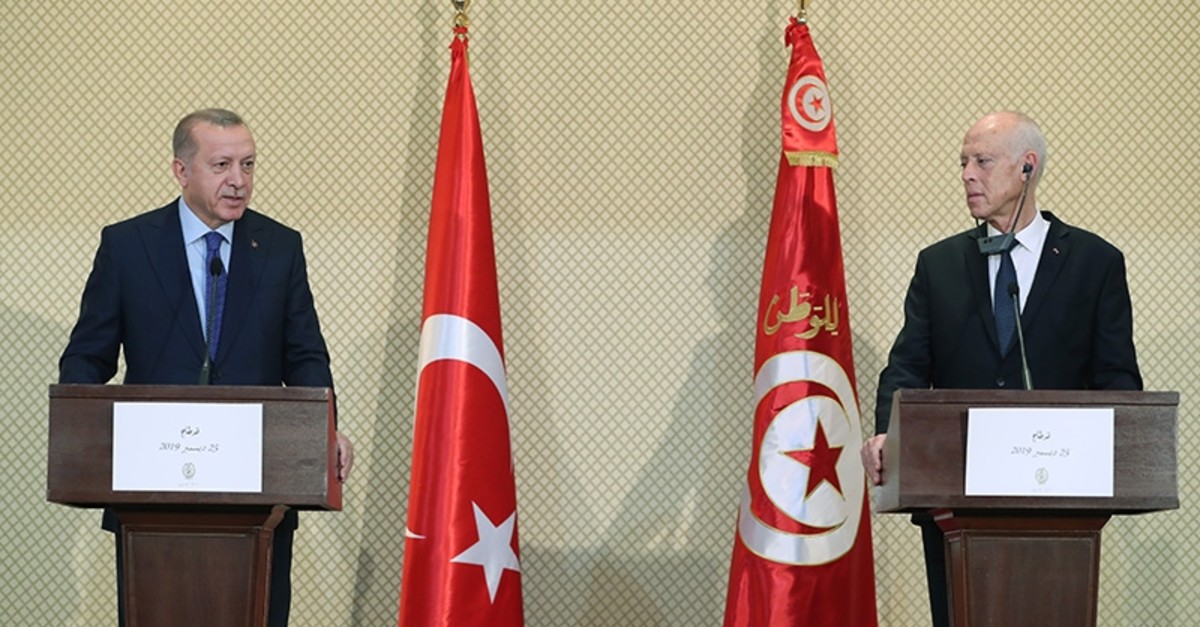 President Recep Tayyip Erdoğan on Wednesday began diplomatic efforts to achieve stability in Libya by meeting with his Tunisian counterpart Kais Saied in a surprise visit to Tunisia.

Erdoğan landed with a delegation to hold an undisclosed meeting with Saied. In the meeting, the two leaders discussed cease-fire efforts in Libya.

"I believe that Tunisia will have valuable and constructive contributions to the efforts of ensuring stability in Libya," Erdoğan said in a joint news conference in Tunis, noting that the two leaders focused on cooperative steps that can be taken to facilitate a political process in the country.

He noted that the ongoing crisis in Libya does not only negatively affect the country but also disturbs neighboring countries, especially Tunisia.

The president also said that the two discussed steps to start a political process after a cease-fire in Libya, and how Tunisia may help.

About the maritime and military support deals Turkey and Libya's Government of National Accord (GNA) signed on Nov. 27, Erdoğan touched on the possibility of Turkish forces going to Libya if the GNA asks, saying that Turkey never has never gone anywhere without an invitation.

"If there is an invitation, we will think about it," he explained.

Turkey's Parliament approved a security and military deal with Libya's U.N.-supported Government of National Accord (GNA) on Saturday.

The president noted that Turkey and Libya will continue to cooperate and Greece has no right to comment on the matter.

"We take steps with the internationally recognized Sarraj administration," Erdoğan said in reference to Tripoli-based GNA Prime Minister Fayez al-Sarraj, adding, "Let us not allow other actors to oppress our brothers and sisters in Libya."

Erdoğan also criticized the presence of the Russian Wagner group in the region, which he previously said acts as the mercenaries of Haftar.

"Under what name did the so-called Wagners, which include 5,000 actors from Sudan and 2,000 from Russia, come to Libya? What are they doing there?" Erdoğan said.

Erdoğan also said the upcoming Berlin conference, which is expected to be held in January, should have included Tunisia and Algeria. He had previously said that countries in the region should also have a say in the resolution of the Libya conflict as they are directly affected by it.

The Berlin Conference on Libya was initially planned to take place in October but was delayed until November.

Meanwhile, Tunisian President Saied said they had an extensive meeting about the Libya issue. He said the deal signed between Libya and Turkey concerns the two countries.

This was the first official Turkish visit to Tunisia since Saied was elected as the new president of the country in October this year.

Turkey supports the U.N.-backed GNA government in Libya against the militia and mercenaries of self-proclaimed military leader Haftar.

On Nov. 27, Turkey and the GNA signed two bilateral memorandums after a meeting between Erdoğan and Sarraj in Istanbul.

Tripoli-based Sarraj sent letters to the leaders of the United States, Britain, Italy, Algeria and Turkey, urging them to "activate security cooperation deals."

The aim is to help the GNA "face aggression against the Libyan capital ... by any armed group operating outside the legitimacy of the state, to preserve social peace and achieve stability in Libya," he said.

Sarraj also called for help to battle Daesh and al-Qaida, saying Haftar's offensive had given the terrorist groups "the appropriate opportunity and environment" for a resurgence in Libya.

Since the ousting and death of the country's longtime dictator, Moammar Gadhafi, in 2011, two seats of power have emerged in Libya. Turkey and Qatar, as well as Italy, have been allied with al-Sarraj's government based in Tripoli.

On April 4, Hafter's forces launched an offensive to capture the capital Tripoli from the GNA. Haftar's April push made early gains but has since stalled at the edge of the capital in a bloody stalemate.