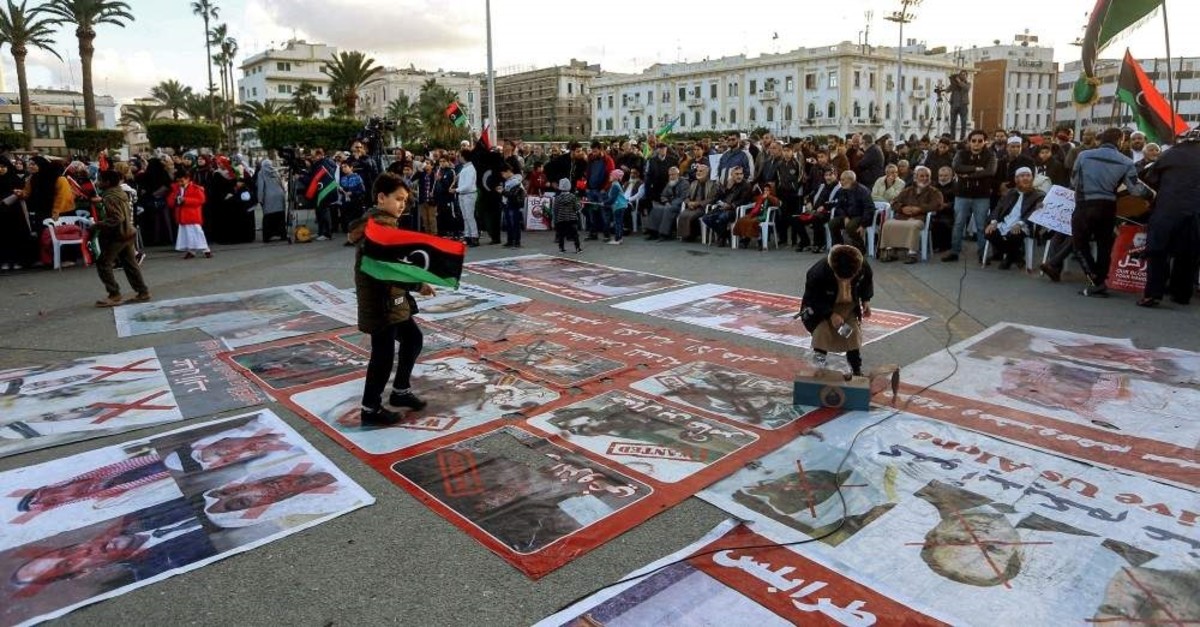 Portraits of Egyptian President Abdel Fattah al-Sisi, Saudi King Salman bin Abdulaziz, and Abu Dhabi Crown Prince Mohammed bin Zayed are displayed on the ground covered with red cross marks as people demonstrate against them and against eastern Libyan strongman Khalifa Haftar, and in support of the UN-recognized GNA in the Martyrs' Square in Tripoli, Dec. 27, 2019 (AFP Photo)
by Daily Sabah with Agencies Dec 28, 2019 7:16 pm

The conflict in Libya could potentially dissolve into chaos and become the next Syria, Foreign Minister Mevlüt Çavuşoğlu warned Saturday and said he will meet with the leaders of political parties Monday as a proposed mandate to deploy Turkish troops to Libya is likely to be brought to the agenda of Parliament next week.
Speaking at the ruling Justice and Development Party's (AK Party) consultation meeting in Antalya, on Turkey's Mediterranean coast, Çavuşoğlu said Turkey is taking the initiative to prevent Libya from further descending into chaos and working to avoid the partition of the country, unlike the inaction of the Muslim world and its main representative body, the Organisation of Islamic Cooperation (OIC).
"If today Libya becomes like Syria, then the turn will come for the other countries in the region,” he said.
"We need to do whatever is needed to prevent Libya from being divided and sliding into chaos, and that is what we are doing. It is the legitimate government there that we deal with," he added, stressing the importance of the military and security deal signed with Libya.
On Nov. 27, Ankara and Tripoli's UN-recognized Government of National Accord signed two separate agreements, one on military cooperation and the other on maritime boundaries of countries in the Eastern Mediterranean.
Çavuşoğlu will meet with main opposition Republican People's Party (CHP) Chairman Kemal Kılıçdaroğlu, ruling AK Party’s electoral alliance partner Nationalist Movement Party (MHP) Chairman Devlet Bahçeli and opposition Good Party (İP) Chairwoman Meral Akşener to inform them regarding the mandate.
The proposal was materialized following an official demand from the U.N.-recognized Government of National Accord (GNA) based in the capital Tripoli, which is under attack by troops linked to strongman Khalifa Haftar based in eastern Libya.
The foreign minister's drive came as an information notice sent from the AK Party's parliamentary group to deputies Monday, revealed that the mandate concerning troop deployment to Libya could be presented to the Parliament by Dec. 30, and the General Assembly could be called for a meeting on the matter as of Jan. 2, calling on the deputies to plan their schedules accordingly and be present during the General Assembly session.
The deal allows Turkey to provide military training and equipment at the request of the Libyan government, which controls the capital, Tripoli, and some of the country's west. Following the military cooperation deal, President Recep Tayyip Erdoğan said Ankara might consider sending troops to Libya if the Tripoli government made such a request, which was conveyed on Thursday.
In a meeting with journalists in the capital Ankara earlier Saturday, Kılıçdaroğlu said the CHP will not support the troop deployment mandate, saying that Turkey should be in Libya to make the warring sides reach peace. He argued that such a deployment risks clashing with Haftar's troops, Egypt and Russia. Both countries, along with the United Arab Emirates (UAE), Saudi Arabia and France, are the main backers of Haftar, whereas Turkey, Qatar, Britain and Italy support the GNA.
Libya descended into chaos following the ousting and death of the longtime dictator Muammar Gadhafi in 2011. Following years of fighting between rival groups and the clearing of pockets of territories controlled by terrorist groups in the process, two seats of power have emerged in Tripoli and Tobruk, reflecting the country's traditional east-west divide.
İP's Akşener also argued that it is not right for Turkish soldiers to become a party in a civil war.
Meanwhile, MHP's Bahçeli said in a written statement Saturday that the party supports the mandate to be brought before the General Assembly on Jan. 2, adding that all 49 lawmakers will back the proposal. Arguing that Turkey appears to be a country that is tried to be pressurized, encircled or even isolated from strategic fields from all sides by other parties, Bahçeli said the conflict in Libya has become an issue concerning Turkey's national security and rights in the eastern Mediterranean and Haftar needs to be stopped and balanced.