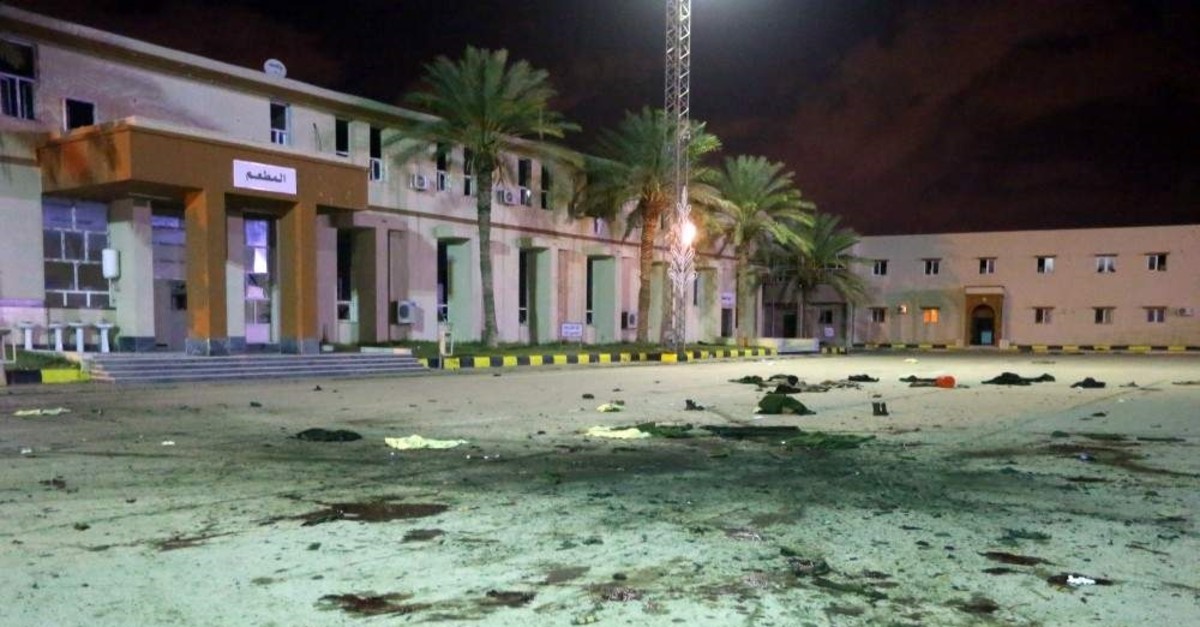 Speaking in a broadcast interview with CNN Türk, President Erdoğan said Turkish military units had started moving to Libya to support Fayez al-Serraj's internationally-recognized Government of National Accord (GNA), based in Tripoli.

Pointing out that there were currently 2,500 troops from Russia's Wagner paramilitary group and 6,000 troops from Sudan in Libya, the president asked, "Why shouldn't we go in when the legitimate government requests us to do so?"

"Our soldiers' duty there is coordination. They will develop the operation center there. Our soldiers are being sent gradually right now," he said.

Operation center aims to act together in coordination with troops from Libya's legitimate armed forces, who face a military threat from foreign-backed forces based in the country's east.

Erdoğan also stressed that Turkey's objective was "not to fight" but "to support the legitimate government and avoid a humanitarian tragedy."

He added that Turkey would not be deploying its own combat forces. "Right now, we will have different units serving as a combatant force," he said.

Turkey's Parliament last week passed a motion allowing for the deployment of troops to Libya for one year in order to respond to threats from illegitimate armed groups and other terror groups working against both countries' national interests.

Turkey's move comes after the Tripoli-based Government of National Accord made a formal request for military support.

Libya's GNA recently made a formal request for "air, ground and sea" support from the Turkish military to help fend off an offensive from the forces of Gen. Khalifa Haftar, who is attempting to take control of the capital, Tripoli. Turkey supports the U.N.-backed government against the militia and mercenaries of the latter self-proclaimed military chief.

Haftar announced Dec. 12 that he had ordered militants to launch a "decisive battle" to capture the city.

More than 280 civilians and 2,000 fighters have been killed since the beginning of Haftar's assault on Tripoli, according to the United Nations. The fighting has displaced some 146,000 people, with the ongoing violence threatening to plunge Libya into violent chaos to rival the 2011 conflict which led to the ousting and murder of longtime dictator Moammar Gadhafi.

Ankara is joined by Italy and Qatar in supporting Sarraj's legitimate government in Tripoli. Meanwhile, the rival force based in the east is supported by France, Russia, Jordan, the United Arab Emirates, alongside other key Arab countries.

Since the ousting of late leader Moammar Gadhafi in 2011, two seats of power have emerged in Libya: Haftar in eastern Libya supported mainly by Egypt and the United Arab Emirates, and the GNA in the capital Tripoli, which enjoys U.N. and international recognition.

Speaking at a news conference, Foreign Minister Mevlüt Çavuşoğlu on Monday also commented on the conflict in Libya.

"I told U.N. Secretary-General Antonio Guterres last night that if we do not put a stop to this now, the war will be go on, especially if it is carried into Tripoli, which would result in the deaths of multitudes," Çavuşoğlu said, adding there would be no winner in the war.

He also said that Turkey was opposed to mercenaries coming to Libya, as they would hinder efforts to maintain peace and stability.

"Our aim is to establish a cease-fire as soon as possible and to contribute to the revival of the political process and to accelerate it," Çavuşoğlu added.

Meanwhile, the European Union's top diplomat warned Monday that more intense fighting could be about to break out around the Libyan capital Tripoli, calling for a political solution to the crisis.

"Recent developments in Libya indicate that an escalation of violence around Tripoli could be imminent," said the EU high representative for foreign affairs, Josep Borrell.

The U.N. Security Council was to meet later Monday on the situation in Libya, where Turkish troops have begun deploying to protect the U.N.-recognized government from the Haftar forces.

The meeting, held at Russia's request, was formally focused on an international conference on Libya that Germany hopes to organize by month's end. So far, no date for the meeting has been announced.

But Monday's talks were the first chance for Security Council members to discuss security and maritime deals struck by Libya and Turkey in November – and Ankara's subsequent decision to send troops to Libya.

On Friday, U.N. Secretary-General Antonio Guterres renewed his call for an immediate cease-fire in Libya.

"Any foreign support to the warring parties will only deepen the ongoing conflict and further complicate efforts to reach a peaceful and comprehensive political solution," he said in a statement.

On Saturday, an airstrike hit a military school in the capital, leaving at least 30 people dead, according to the health ministry of the U.N.-recognized Government of National Accord. Haftar's forces denied responsibility for the attack.

"We condemn attacks such as Saturday's strike against the military school, which only bring more violence and human suffering," Borrell said.