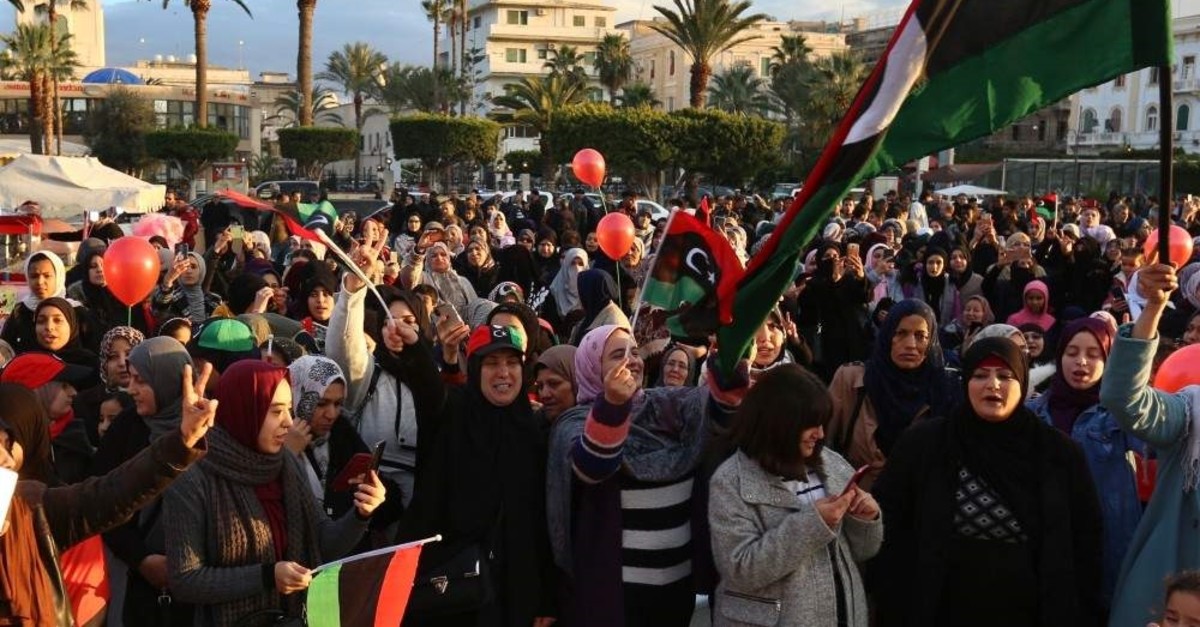 The Libyan cease-fire brokered by Ankara and the Kremlin has been welcomed by locals and the international community. Turkey has continued its diplomatic efforts to reach a political solution to the crisis

Calm prevailed in Libya's capital Tripoli on Sunday following a cease-fire brokered by Turkey and Russia. The cease-fire took effect at midnight local time and the decision was celebrated by the local people with fireworks and drivers honked in celebration, following affirmative responses from all sides.

The cease-fire announcement came minutes after President Recep Tayyip Erdoğan and his Russian counterpart, Vladimir Putin, held a telephone conversation. The leaders discussed regional issues, including Libya, according to diplomatic sources. No further details of the conversation have been provided.

The cease-fire, which is regarded to be the first step toward a political situation in the Libyan crisis, was also welcomed by the international community.

The U.N. welcomed the cease-fire and called on Libya's warring factions to abide by the truce.

"The (U.N.) mission expresses its full readiness to support Libyans and make use of all its sources to help them find a final peaceful solution to the Libyan crisis," the U.N. Support Mission in Libya (UNSMIL) said in a statement posted online.

Meanwhile, the Transportation Ministry of the U.N.-recognized Government of National Accord (GNA) announced it would reopen Tripoli's Mitiga International Airport, which was closed due to attacks by Gen. Khalifa Haftar and his rebel forces.

On Wednesday, Turkey and Russia made a joint call for a Jan. 12 cease-fire after Erdoğan and Putin met in Istanbul. They urged Libya's warring parties for de-escalation and a political solution as warring factions clashed and carried out airstrikes in a conflict drawing increasing foreign involvement and concern.

Gen. Haftar quickly announced his rejection of the cease-fire, a decision which was reversed Sunday night. While Haftar's forces accepted the cease-fire, they conditioned it by saying the "response will be severe in the

event of any violation of the truce by the opposing camp," a reference to the GNA.

"Turkey's expectation from its Russian friends is to convince Gen. Khalifa Haftar for a cease-fire in Libya based on what was agreed upon by the Turkish and Russian presidents," said Foreign Minister Mevlüt Çavuşoğlu earlier Saturday, speaking at a joint news conference with his Ghanaian counterpart Shirley Ayorkor Botchwey in Istanbul.

When it comes to a political solution, Turkey has no problem with dialogue with anyone, including Haftar, Çavuşoğlu said, but firstly Haftar will have to abide by the cease-fire and stop the aggression, then go to the political process.

"Some neighboring countries in the region are trying to disrupt this cease-fire," the foreign minister added and accused France of undermining peace efforts in Libya.

"It is France that has caused chaos in Libya by continuing to give all kinds of support, including weapons, to an illegitimate administration," Çavuşoğlu said and added France, at the same time, is speaking out against Turkey.

Turkey has long been striving to support the official government in Tripoli against the warlord Gen. Haftar, intensifying diplomatic efforts and reiterating Ankara's position in a peaceful solution to the crisis.

Ankara is joined by Italy and Qatar in supporting al-Sarraj's legitimate government in Tripoli. Meanwhile, the rival force based in the east is supported by France, Russia, Jordan and the United Arab Emirates (UAE), alongside other key Arab countries.

The cease-fire reached in Libya is a concrete result of Turkey's peace efforts in the region, Presidential Spokesperson İbrahim Kalın said Sunday.

Highlighting Turkey's efforts in the name of peace in the region, Kalın tweeted: "Diplomacy is a matter of managing a process, and the main goal is to facilitate peace, security, stability and prosperity in our country and in the region."

On the other side, Italian Prime Minister Giuseppe Conte tweeted Saturday: "Haftar's forces have accepted the cease-fire: it is the first step in pursuing a political solution. Still, a long way to go, but the direction is the right one."

Italy has been stepping up efforts regarding Syria, engaging in many diplomatic discussions in recent days. Conte recently spoke to the head of the U.N.-recognized government, Fayez al-Sarraj, French President Emmanuel Macron and Haftar.

Conte is now expected to visit Turkey Monday to meet with President Erdoğan. During the Italian prime minister's first visit to Turkey, Conte and Erdoğan are expected to discuss the Libyan crisis as well as bilateral relations and regional and global developments.

The GNA recently made a formal request for "air, ground and sea" support from the Turkish military to help fend off an offensive from the forces of warlord Haftar, who is attempting to take control of the capital, Tripoli. Turkey last week began deploying troops in Libya to back GNA leader Fayez al-Sarraj.

More than 280 civilians and 2,000 fighters have been killed since the beginning of Haftar's recent assault on Tripoli, according to the United Nations. The fighting has displaced some 146,000 people, with the ongoing violence threatening to plunge Libya into violent chaos to rival the 2011 conflict that led to the ousting and murder of longtime dictator Moammar Gadhafi.

A closed-door meeting between Erdoğan and al-Sarraj was held at the Dolmabahçe Palace.

Michel arrived in Turkey for talks on reducing tensions in Libya after Ankara began deploying troops there.

The closed-door meeting between Erdoğan and Michel was also held at the Dolmabahçe Palace and lasted nearly two hours.

The EU Council is the EU's main decision-making body, made up of government ministers from every member state.

"The presidents discussed how the EU and Turkey can work together to de-escalate the situation in the Middle East and Libya," the EU Council said in a statement.

Michael welcomed the "constructive language" of Erdoğan's joint statement with Russian President Vladimir Putin on a cease-fire and support for the Berlin process, the statement said.

The EU statement said both sides agreed to prevent "a new cycle of violence" in the Middle East through de-escalation and dialogue.

"There is a need for negotiated, political solutions," it stressed.