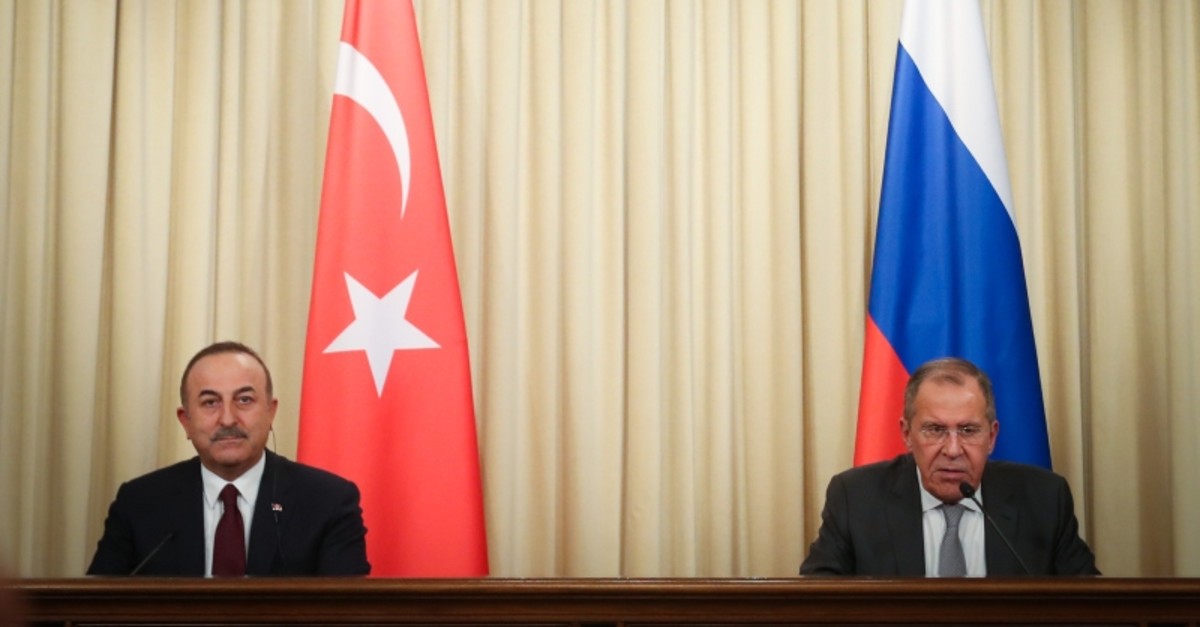 Despite Turkey and Russia’s diplomatic efforts to end violence and find a political solution in conflict-ravaged Libya, warlord Haftar asked for more time following negotiations to reach a cease-fire deal

Both sides in Libya's long-running conflict met in Moscow on Monday to discuss an agreement on the terms of a cease-fire that went into effect over the weekend, ending nine months of fighting after weeks of international diplomacy. Despite some progress toward an agreement, Libyan strongman Khalifa Haftar asked for more time until Tuesday morning.

A draft text was agreed on for a possible cease-fire in Libya, said Turkish Foreign Minister Mevlüt Çavuşoğlu in a joint press conference with his Russian counterpart Sergey Lavrov, after the negotiations between participants were completed. Çavuşoğlu said the U.N.-recognized Libyan government based in Tripoli signed the deal.

The draft agreement calls for the creation of a military commission to determine a contact line between the warring sides, to cease all offensive military actions and to take steps to stabilize the situation in Tripoli and other cities.

"In order to speed up the political process, we will continue to work with Russia," Çavuşoğlu said.

The truce comes after a diplomatic offensive led by Ankara and Moscow, which have established themselves as key players in Libya.

Libya's head of High Council of State, Khaled al-Mechri, said the signing of the agreement in Moscow would pave the way for the revival of the political process.

"Fayez al-Sarraj and Haftar will separately meet with Russian officials and a Turkish delegation cooperating with Russia," said Lev Dengov, the head of the Russian contact group on the intra-Libyan settlement, speaking to Russian state news agency Ria Novosti before the start of meetings.

"Representatives from the United Arab Emirates and Egypt will most likely be attending the meetings as observers," Dengov said."During the meetings, resolution of the Libyan crisis will be discussed, and the possibility of signing a cease-fire agreement and details of such a deal will be negotiated," Dengov added.

It was reported that Libya's U.N.-backed government refused any direct meeting with Haftar in Moscow.

"We have refused to meet with Haftar and will not sit with him under any circumstances," High Council of State head Khaled al-Mishri said, according to private broadcaster Libya Al Ahrar TV.

"Our talks in Moscow are held with Turkey and Russia," he added.

Sarraj said earlier Monday his government has accepted the cease-fire deal with Haftar to prevent more bloodshed in the country.

"We will not ignore the sacrifices of our sons and martyrs or our dream for a civil state," Sarraj said in an interview with the private Alahrar TV channel.

"Our acceptance of the cease-fire comes from a position of strength to maintain national and social cohesion," he said.

Sarraj said his government forces, however, are ready "to resume military operations in case of any break to the cease-fire."

Sarraj also called on Libyans to "turn the page on the past, reject discord and to close ranks to move toward stability and peace."

The top diplomats and defense chiefs of Russia and Turkey gathered in the Russian capital to assist the talks between Sarraj and Haftar.

The meeting started with talks between the Russian and Turkish sides, Maria Zakharova, the spokeswoman for the Russian Foreign Ministry, told reporters.

The hosting Foreign Minister Sergey Lavrov and Defense Minister Sergei Shoigu addressed the conflicts in Libya and Syria with their Turkish counterparts Çavuşoğlu and Akar.

On Jan. 12, the warring sides of the Libyan conflict announced a cease-fire in response to the call of Russian and Turkish presidents.

The cease-fire took effect at midnight local time, and the decision was celebrated with fireworks in Tripoli.

The cease-fire followed a joint call by Turkish President Recep Tayyip Erdoğan – who backs Sarraj and has sent troops to help the Government of National Accord (GNA) – and Putin, who analysts have long seen as supporting Haftar.

Pro-Haftar forces are also supported by the United Arab Emirates, Saudi Arabia and Egypt – all regional rivals of Turkey.

Sarraj has also accused Paris of supporting Haftar and tacitly backing his assault on Tripoli, claims denied by French officials.

The GNA in Tripoli had been under attack since last April from forces loyal to Haftar, which on Jan. 6 captured the strategic coastal city of Sirte.

More than 280 civilians and about 2,000 fighters have been killed and 146,000 Libyans displaced since Haftar launched his assault, according to the U.N.

The international community also welcomed the cease-fire between the warring sides in Libya, which was announced following Turkey and Russia's joint call to end clashes and reach a political solution.

The European Union's foreign policy chief and the head of bloc's parliament yesterday welcomed the cease-fire in Libya.

"The announcement of a cease-fire in Libya provides an important opportunity to resume dialogue for a political solution to the crisis. It is now to the parties to fully implement it," said Josep Borell, high representative of the EU for foreign affairs and security policy, on Twitter.

"The EU is ready to help Berlin process and efforts of the U.N. All Libyans deserve peace and prosperity," he added.

Separately, David Sassoli, the president of the European Parliament, welcomed the decision in a written statement.

"The halt to the armed conflict is the first fundamental step in the right direction. This is a result for which the European Union has worked hard for," he said in the statement.

"It is now necessary to consolidate this result and relaunch, after months of stalemate, the dialogue between the parties to find a political solution to the Libyan crisis," he said.

"The European Union, under the auspices of the United Nations and within the framework of the Berlin Process, can and must play a leading role in facilitating this," he added.

European Commission President Ursula von der Leyen also welcomed the cease-fire yesterday but cautioned that the United Nations must lead the process of rebuilding the country.

"A cease-fire, yes, it is a first step in the right direction, but what you need is a process for consolidation, for reconstruction and a government of unity. There is a long way to go. This has to be a U.N.-led process," she told reporters after a meeting with Luxembourg Prime Minister Xavier Bettel.

French President Emmanuel Macron has called for a credible and lasting cease-fire in Libya, his office said yesterday, as the main players in the conflict prepare to sign a truce.

"The president emphasized the necessity that the cease-fire that is to be announced is credible, lasting and verifiable," Macron's office said, following telephone talks between the French president and Russian counterpart Vladimir Putin on Sunday.

Egypt and Algeria on Sunday announced their support for the cease-fire.

"Egypt welcomes the unconditional cease-fire declared in Libya and expresses its support to all who will prevent the bloodshed of our brotherly people of Libya," Egypt's Foreign Ministry said in a statement.

The statement added that Egypt supports a comprehensive political solution to protect the unity and territorial integrity of its neighbor countries, including Libya.

Meanwhile, Algeria's Foreign Ministry said in a statement: "Welcoming the cease-fire in Libya, Algeria urges all sides to adhere to the cease-fire and to resume a dialogue process as soon as possible."

The Arab Union was another party that expressed its satisfaction with the implementation of a cease-fire in Libya.

During his call with Putin, Macron expressed hope that a conference to be held in Berlin would relaunch a peace process for Libya under the aegis of the United Nations.

Since last September, several high-level meetings were held in Berlin to put an end to the Libyan conflict.

The meetings were held with the participation of France, Italy, Germany, and the U.K. The negotiations are known as the Berlin peace process.