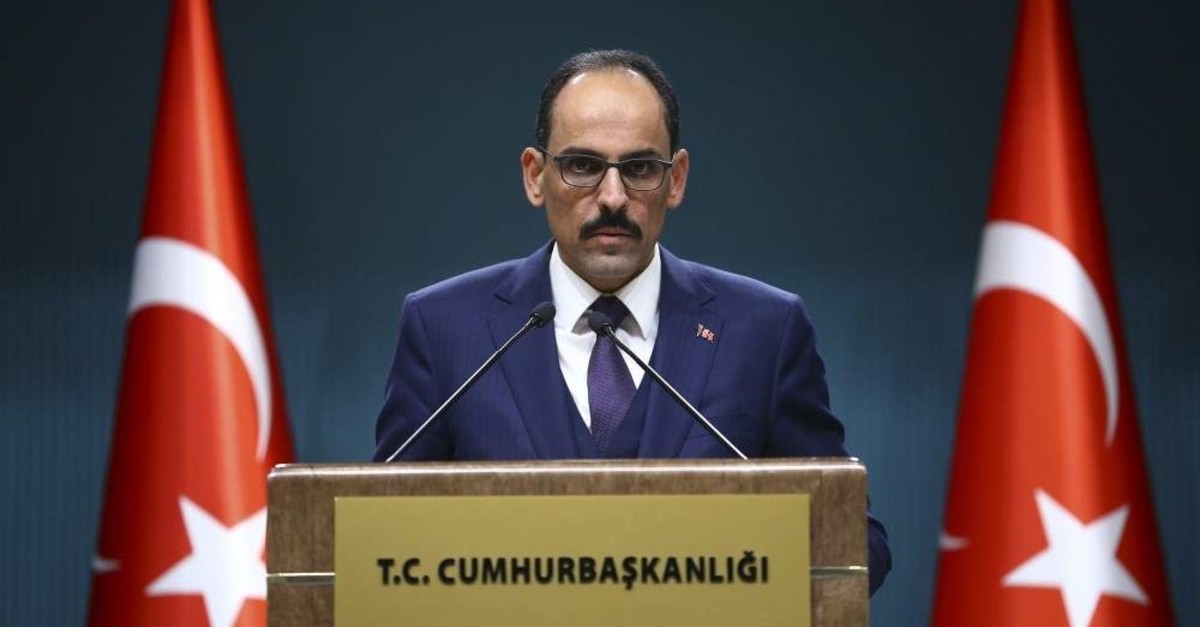 "It's actually our diplomatic efforts and our support for the Government of National Accord [GNA] that has brought a degree of balance to this conflict, and as a result of which we have the cease-fire," Ibrahim Kalın told CNN International in an interview where he spoke on developments in Libya and the aftermath of the killing of a senior Iranian general.

Asked about Turkey's strategy in Libya -- where the U.N.-recognized GNA fights self-styled Commander Khalifa Haftar's forces -- Kalın said Turkey had "long-standing relations" with Libya which he referred to as "key" regional player and escalations there would impact the neighboring countries and Europe.

"What happens in Libya doesn't stay there. It affects all the neighboring countries, Algeria, Tunisia, Sudan and others, but also the Mediterranean," he said, adding Europe also became concerned about the flow of migrants and weapons.

The senior official went on to say that the conflict in Libya, similar to the case of Syria, had been continuing for years, therefore it was high time the international community stepped in to broker peace.

He stated that the Haftar side repeatedly violated agreements and was the responsible party of the conflict and violence, however, Ankara did not rule it "out of the game," adding that is the reason behind Turkey's presence in cease-fire talks in Moscow held on Jan. 13 after a call by the Turkish and Russian presidents.

"We're trying to bring an end to this conflict where you have so many different factions, tribes, and of course, international actors, stakeholders and many others," he said and stated that the situation in Libya was "fragile" and Turkey was in contact with the U.S., Italy and other actors.

Kalın stressed that his European counterparts gave credit to Turkey with regard to the cease-fire while some countries, including Egypt, provided weapons for Haftar's forces whereas mercenary and militia elements came from Sudan, Niger, Chad, and some other countries.

"They're the ones who are fueling this conflict. And now they turn around and blame us. If the EU wants to be relevant in this conflict. I think they have to appreciate Turkey's efforts to bring an end to this violence," he said.

In response to a question if Turkey had any intelligence regarding possible attacks on U.S. embassies as alleged by Trump administration which described the killing of Iranian top Gen. Qasem Soleimani as an 'act of self-defense', Kalın said Ankara learned about this after statements by Trump and American interlocutors.

Stressing that Turkey was "very concerned" about the growing escalation between Tehran and Washington, the Turkish official went on to say that the killing of Soleimani and attacks on U.S. airbases by Iran would only make things more complicated.

"The real issue is that Iraq has turned into a battlefield for political power, power muscling between the United States and Iran and other countries, a lot of proxy forces in the region used by both sides. So that is the root of the problem there," he stated.

He noted that growing escalations in the Middle East undermined the fight against the Daesh terror group and put Iraqis under a difficult situation while negatively affecting regional issues.

"So, we have to be careful not to let ISIS (Daesh) or al-Qaida or other terrorist elements, including PKK and its Syrian branch YPG, and others take advantage of this situation," he said.

Referring to Trump's statements regarding a more active NATO role in the Middle East, he said: "So President Trump has a point there."

He said President Erdogan also called for a more active NATO role in the fight against terrorism as Turkey became a target of YPG/PKK, Al-Qaida and Daesh terror groups previously.

"Of course, it doesn't mean that you start sending NATO troops to Iraq, to Syria or other places that need to be, you know, worked out in a smart way, in an intelligent way to serve the purposes of the alliance, but also protect the members," he stated.
Last Update: Jan 15, 2020 6:02 pm
RELATED TOPICS