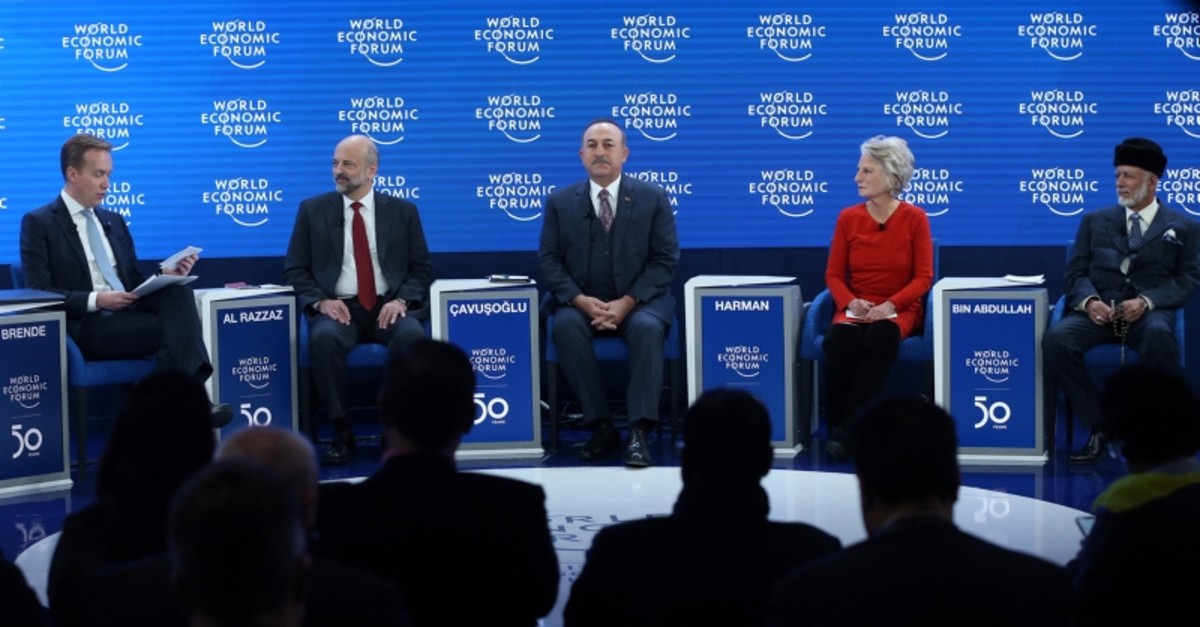 Surrounded by a spiral of conflicts taking hold of its Middle Eastern neighbors, Ankara in recent years has ramped up diplomatic efforts to reinstitute peace and prosperity in the region despite major obstacles and risks posed by its long-standing allies

Ankara is ready to cooperate with any actor to mitigate the tensions and resolve conflict in the Middle East, Foreign Minister Mevlüt Çavuşoğlu stressed Wednesday, referencing the recent alliance with Russia over various regional matters as evidence of the country's intentions in this respect.

"Our cooperation with Russia clearly shows that we are ready to work with anyone to restore peace in the Middle East," Çavuşoğlu said at the World Economic Forum in the Swiss Alpine town Davos, referring particularly to the conflicts in Libya and Syria.

Speaking at the session titled "Geopolitical Outlook: The Middle East and North Africa," the minister explained what the Syrian regime had done during its brutal offensive on the northern Syrian province of Aleppo in 2015, which caused a humanitarian catastrophe. Turkey and Russia decided to cooperate to evacuate the city and reduce the cost of further humanitarian destruction.

"After Aleppo, we later decided to extend our cooperation to the whole of Syria and initiated the Astana process with the inclusion of Iran because it was also one of the guarantors of the regime," Çavuşoğlu said, elaborating how the Ankara-Moscow rapprochement to direct efforts toward solving political and military problems in the Middle East began.

Turkey, Iran and Russia initiated the Astana process in late 2016 to bring the warring sides in Syria together and find a permanent solution for the eight-year war in the country, which had initially begun as a civil war but morphed into an international conflict. The first meeting of the Astana process was in Turkey in January 2017 to facilitate U.N.-sponsored peace talks in Geneva. From that point on, the cooperation with Russia developed each day and started to cover other regional issues as well, the latest of which is the recent Libyan conflict.

Citing repetitive failed attempts to establish fruitful diplomatic dialogue and cooperation to introduce solutions to long-standing problems in the region, Çavuşoğlu remarked that, unlike Russia, Turkey's European allies did not show the desire to find solutions to ongoing problems together.

Regarding the escalating tension in the northwestern Syrian province of Idlib, which is another area of cooperation with Russia, Çavuşoğlu said that the Bashar Assad regime is increasing its aggression, worsening the humanitarian crisis there. He emphasized that the regime is indiscriminately killing women and children, and that 400,000 people have been displaced and are moving toward the Turkish border.

"We are actually working with the Russians and others to implement the cease-fire there but it has not been easy to achieve," Çavuşoğlu said, adding that "the situation on the ground which the regime is enforcing does not look very promising."

Attempts to sponsor cease-fire in Libya

Çavuşoğlu also spoke of the escalating crisis in Libya, saying that until April 2019, a wide range of initiatives to install an interim and transition government in the North African country had been carried out. But since putschist Gen. Khalifa Haftar launched an offensive against the capital city of Tripoli to topple the U.N.-backed Government of National Accord (GNA), the situation on ground has worsened and previous attempts to find a political solution have crumbled.

"Again, together with Russia, unfortunately, we could not manage this with our European partners, as in Syria. Following the call from President (Recep Tayyip) Erdoğan and (Russian President Vladimir) Putin, there has been a cease-fire despite some violations," Çavuşoğlu said.

"In Berlin, we gathered together all relevant actors including the P5 countries. We all committed there to a sustainable truce or cease-fire, along with the GNA Prime Minister Fayez al-Sarraj, but Haftar did not make any announcement as he did not sign the joint statement for the cease-fire in Moscow," the minister said.

Last Sunday, the international actors involved in the Libyan crisis and the warring parties convened in the German capital and expressed commitment to a sustainable cease-fire in Libya. Nevertheless, Haftar and his militias continued their aggression in the towns and neighborhoods surrounding the Libyan capital.

Ahead of the Berlin conference, the renegade putschist general and the Petroleum Facilities Guard of the central and eastern regions blockaded oil exports on Saturday from Brega, Ras Lanuf, Hariga, Zueitina and Sidra ports with instruction delivered to Sirte Oil Company, Harouge Oil Operations, Waha Oil Company, Zueitina Oil Company and Arab Gulf Oil Company (AGOCO), subsidiaries of the National Oil Corporation. The blockage may result in a loss of crude oil production of 800,000 barrels per day and a financial cost of $55 million per day.

"Blockading oil facilities is a criminal act. If these threats are carried out, NOC will prosecute perpetrators to the fullest extent possible under Libyan and international law," said NOC, which has tried to stay out of political conflicts and maintain a neutral perspective in the conflict.

Since the revenues from the oil exports, which totaled $20 billion last year, are deposited at the Tripoli-based Central Bank overseen and managed by the GNA, Haftar is trying to cripple the country's economy and deprive the GNA of its resources. The distribution of revenues across Libya has been one of the major issues in the country's prolonged crisis.

Oil exports account for nearly 90% of the total revenues of Libya. The blockade by Haftar, in fact, decreased the oil production in the country to the lowest level since 2011, when the country began to plunge into a whirl of conflict with the overthrow of Moammar Gadhafi.

From cold war to hot conflict

The Middle East has a kind of spillover effect both at the regional and global levels. The quagmire in which the region has been stuck for the last two decades has produced far-reaching repercussions for the regional countries and global powers.

Citing the increasing problems in the region and how they have been contagious, Brende asked if it is still possible to contain the crisis and unleash the potential. "We are simultaneously seeing blossoming and thriving startups in the region, accompanied by an optimistic approach," he said, describing the turn of events in the recent decades as the transformation of the cold war into hot conflict.

Jordanian Prime Minister Omar al-Azaz, in his address at the session, on the other hand, drew attention to the fact that there is still a possibility to move toward prosperity and peace. "The answer to peace depends on the evaluation of what happened in the last decade. We need to draw some lessons from the last decade," he said, continuing: "We need to change the environment where extremism flourishes. In order to eliminate any further development of extremist ideas and terror groups, the region must capitalize on the potential of the youth, create job opportunities and reduce high unemployment."

The Jordanian prime minister underscored that it is high time that the actors in the region and the global players involved reexamine the model where the countries' boundaries and sovereignty are constantly undermined.

Omani Foreign Minister Yousuf bin Alawi bin Abdullah also pointed out the necessity to adopt a future-oriented policy to restore peace and stability in the region. "We should ask how we want to see ourselves in the Middle East in the next 50 to 60 years," he said.

The only way to see a settlement in the Middle East, the Omani minister said, is to stop blaming the past and start thinking about the future. "Without that, we will continue to see more conflicts and crises. When we think about the future, we need to consider the interests of all the nations," he said.