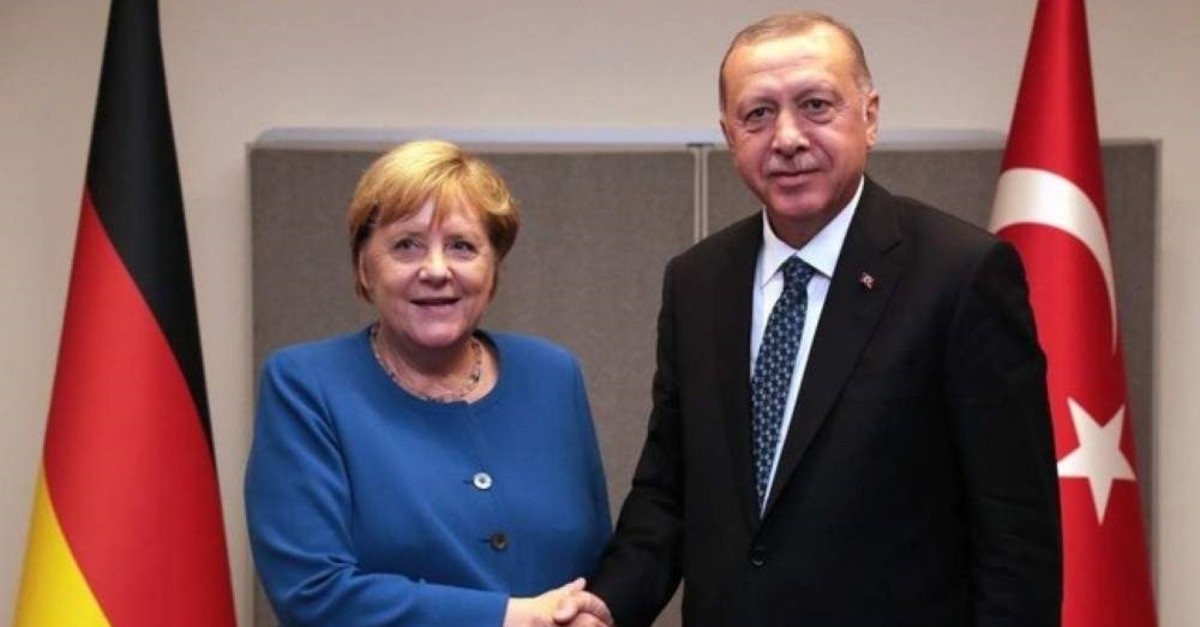 The agenda of the two leaders’ meeting includes Syrian refugees heading toward the Turkish border after fleeing the regime attacks on Idlib and the Turkey-EU migration pact.

While Merkel is expected to express her country’s concerns about a new migration wave that could arrive in Europe from Syria through Turkey, Erdoğan is expected to highlight Turkey’s disappointment over EU’s failure to deliver its commitments stemming from the migration pact.

Erdoğan’s plan to build a safe zone in northern Syria for refugees is another topic to be discussed. The latest developments in the conflict-ravaged countries of Syria and Libya are other important topics of the two leaders’ main agenda.
Bilateral relations between the two countries, possible steps to enhance cooperation, and Turkey’s process of accession to the EU are also among the agenda items for leaders’ meeting. Germany is preparing to take over the term presidency of the union in June.

After attending the World Economic Forum in Switzerland’s Davos, Merkel will come to Istanbul. The two leaders are also scheduled to attend the opening ceremony of Turkish-German University’s new campus. Merkel also plans to meet with representatives of the business world from the German-Turkish Chamber of Trade and Industry, in addition to civil society representatives.

Merkel’s visit comes amid fears that a renewed conflict in Syria could unleash a new refugee wave.

Erdoğan warned that Turkey, which already hosts about 3.7 million Syrian refugees, would not be able to handle a new wave of migrants if attempts by the Syrian regime and Russia to retake opposition-held Idlib sent more people fleeing.

The two leaders last met in December in London where they discussed the situation in Syria with French President Emmanuel Macron and British Prime Minister Boris Johnson.

Turkey has been a key transit point for irregular migrants aiming to cross into Europe to start new lives, especially those fleeing war and persecution. To reduce the number of illegal migrants on the dangerous Aegean Sea route and to find a solution to the influx of refugees heading to the union, Turkey and the EU signed an agreement in March 2016. The deal stipulates that Greece is to send illegal migrants held on its Aegean islands back to Turkey. In return, Turkey is to send Syrian migrants with documents to various EU countries.

According to the deal, Turkey was also promised a total of 6 billion euros in financial aid, which was initially planned to be given to the country in two installments to be used by the Turkish government to finance projects for Syrian refugees. Visa freedom for Turkish citizens traveling to the EU was also promised under the agreement.

Despite significant developments in the control of migration traffic, the EU has not delivered on its commitments. Similarly, although the first installment of the funding pledged has been provided to Turkey, the EU has yet to fulfill other articles, including visa-free travel for Turkish citizens and an update of the customs union.

Turkey hosts the largest number of refugees and spends the most on humanitarian aid per capita in the world. According to Interior Ministry figures, the number of refugees was 4.2 million in 2017 and has now reached 4.9 million. While 3.7 million Syrians are living in Turkey, more than 415,000 Syrian children have been born in Turkey since the start of the civil war in 2011. Furthermore, Ankara has spent $40 billion on the refugees so far, according to official figures.

Few in the German government want to see a repeat of the migrant crisis of 2015, when Germany had to open its doors to over 1 million people, most of whom were seeking refuge from the Syrian conflict.

The migration wave, the largest Europe had seen since World War II, transformed Germany and Europe's politics, spurring far-right, anti-immigration politicians into legislatures across the continent and fueling Britain's vote to leave the EU.

Migrant numbers have started to pick up again recently as Damascus and Moscow move to retake Idlib, the last significant opposition-held enclave in Syria, where up to 3 million people live.

"If the violence toward the people of Idlib does not stop, this number will increase even more. In that case, Turkey will not carry such a migrant burden on its own," Erdoğan said.

The president has previously warned to "open the gates" for migrants to Europe unless Turkey received more support in hosting the refugees.

Turkey has frequently warned the international community of the imminence of a humanitarian disaster and fresh wave of refugees unless actions are taken and the Syrian regime is restrained. Yet, no worthwhile actions have taken place, as airstrikes and artillery shelling continue to target thousands of civilians.

Ankara has also proposed the establishment of a safe zone in northern Syria cleared from all terrorist elements to allow for the resettlement of Syrians who have fled to Turkey from war-torn areas. Turkey’s safe zone plan aims to host millions of Syrians in a safe and stable environment.