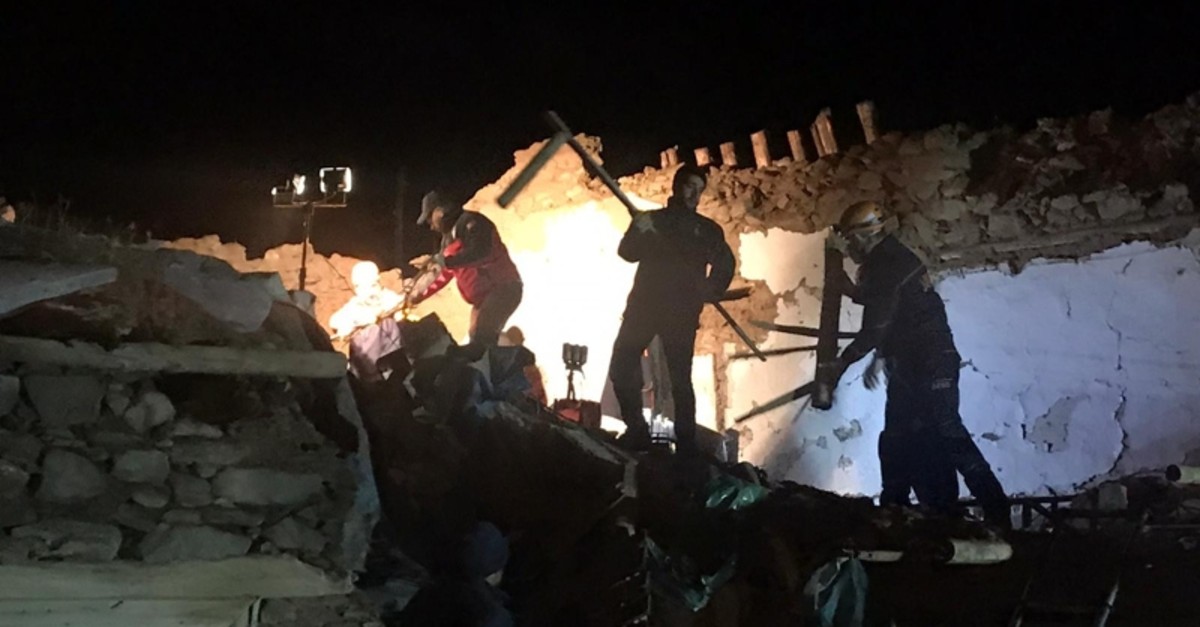 A number of countries and foreign diplomatic missions to Turkey expressed condolences Friday for a powerful earthquake that hit the eastern part of the country.

"The EU stands with Turkey, expresses deepest condolences to the families of the victims and sincere hopes for speedy recovery of the injured," said the Delegation of the European Union to Turkey.

The Turkish Republic of Northern Cyprus (TRNC) President Mustafa Akıncı expressed sorrow in a statement after hearing about the casualties.

"[Russian President] Vladimir Putin sent heartfelt condolences to President of the Republic of Turkey Recep Tayyip Erdoğan over the loss of life and large-scale destruction caused by an earthquake in the Elazığ province," read a statement by Kremlin released on Saturday.

Josep Borrell Fontelles, the high representative of the EU for Foreign Affairs and Security Policy, also expressed "full solidarity with the people of Turkey."

"Our thoughts are with the people of Turkey, with the families of the victims of the devastating #earthquake that hit #Elazig, and all those injured or affected. We are following closely," Fontelles wrote on Twitter.

"I am deeply saddened to hear about the earthquake that struck Turkey, resulting in the loss of lives and injuries, and damage to buildings," said Malaysia's Deputy Prime Minister Wan Azizah Ismail in a statement.

"The people of Malaysia are with the people of Turkey during this difficult period and stand ready to offer assistance facing this calamity," she added.

In a statement issued by the Prime Minister's Office, Khan said his country stands with the government and people of Turkey in this difficult time.

In a separate statement, Pakistan's Foreign Ministry said: "As always, the people of Pakistan equally share the pain of their Turkish brothers and sisters and stand by them in this hour of grief."

Canadian Prime Minister Justin Trudeau wrote on Twitter: "Devastating news from Turkey this evening. Our hearts go out to everyone who was injured or who has lost a loved one in today's earthquake. We're keeping you in our thoughts tonight."

Estonia's Foreign Affairs Minister Urmas Reinsalu wrote on Twitter: "My deepest condolences to everyone who lost loved ones in the terrible earthquake in #Elazığ, Turkey."

"I hope for a speedy recovery of all those injured. We are with the people of Turkey during this difficult time. @MevlutCavusoglu," Reinsalu added.

Sweden's Foreign Affairs Minister Ann Linde wrote: "Tragic news about the earthquake that hit Turkey. Our deepest condolences to all those affected."

"Sincere condolences to the families and loved ones of the victims of tragic earthquake in #Elazığ, expressing solidarity with the people of Turkey in this difficult time," the ministry wrote on Twitter.

Ukrainian Foreign Minister Vadym Prystaiko said: "Very sad about news coming from our friend & partner #Turkey where a strong earthquake hit the city of #Elazig taking lives of many people. In this bitter moment, #Ukraine stays by Turkey and prays for those affected."

Romania's Foreign Minister Bogdan Aurescu wrote on Twitter: "Deeply saddened by the loss of lives caused by the #earthquake in #Turkey. Our wholehearted condolences and our good thoughts for the #Turkish people and the families of the victims."

"My thoughts are with the loved ones of the victims of the devastating earthquake in #Elazig, #Turkey. I sincerely wish full recovery to all the injured and express strong solidarity with the people of Turkey during this difficult time. @MevlutCavusoglu," Linkevicius said.

Jordan's Foreign Affairs Minister Ayman Safadi said: "Our thoughts and prayers are with the victims of the earthquake in #Turkey. We wish the injured a speedy recovery. We extend our deepest condolences to our brethren."

Foreign Minister of North Macedonia Nikola Dimitrov said: "So sad to hear about the loss of life in today's devastating earthquake in Turkey. Our hearts are with our Turkish friends. Stay strong #Turkey! Thinking of you dear @MevlutCavusoglu."

"We would like to express our tremendous sympathy and sadness at the tragic earthquake in #Turkey. [Georgia] stands in full solidarity with our close ally and friend, we share grief of Turkish people and particularly families of victims and wish speedy recovery to all the injured," the ministry added.

"My condolences to the families of victims of the earthquake in #Turkey, I wish speedy recovery to all the injured and keep fingers crossed for search and rescue efforts @MevlutCavusoglu @MFATurkey," Rinkevics wrote on Twitter.

European Commissioner for Crisis Management Janez Lenarcic said that they were closely monitoring the situation in Turkey.

"Worrying news from eastern #Turkey just a while ago hit by a strong #earthquake. Saddened to hear about fatalities and hoping there will not be any more. Our #ERCC is closely monitoring the situation," Lenarcic wrote.

At least 21 people were killed and 1,030 others were injured after a massive earthquake with a magnitude of 6.8 rocked the eastern Turkish province of Elazığ late Friday, also causing damage in neighboring Malatya province.

According to Turkey's Disaster and Emergency Management Authority (AFAD), the quake struck Elazığ's Sivrice district at 8:55 p.m. (1755 GMT) from a depth of 6.7 kilometers.

It is not the first quake Turkey has observed in 2020. A 5.4-magnitude quake jolted the western province of Manisa Wednesday, and Ankara was rattled by a 4.5-magnitude quake Thursday.