Erdoğan arrives in Algeria, the first of three stops on Africa tour 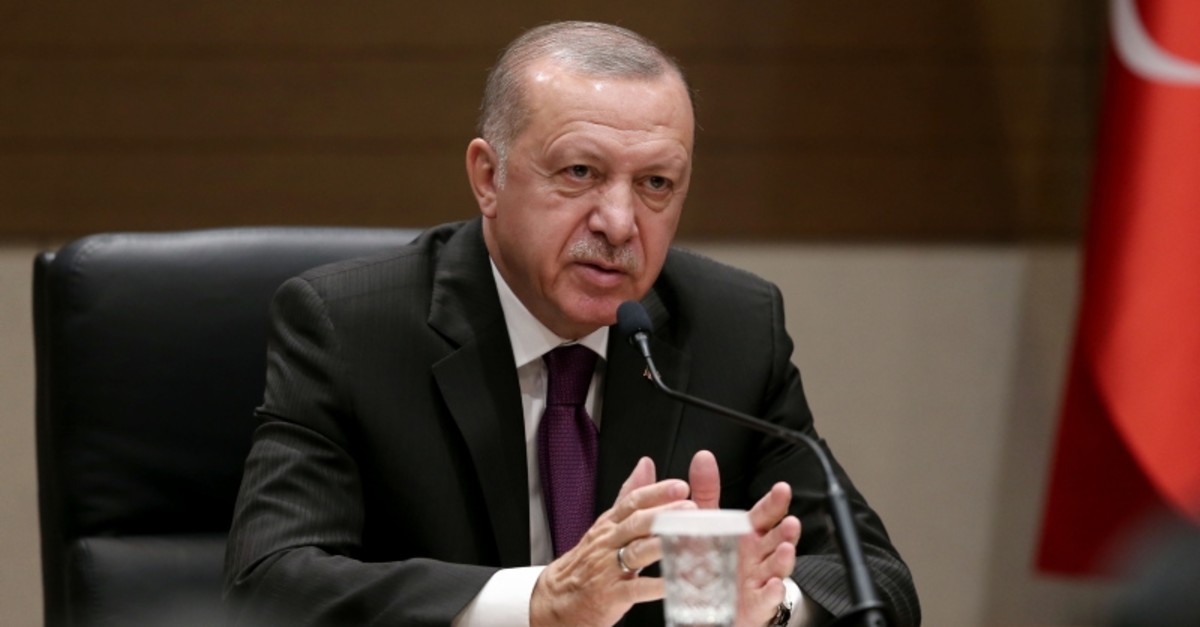 On Sunday, President Recep Tayyip Erdoğan arrived in Algeria, the first stop of his three-nation African tour, where he was welcomed with an official ceremony.
Heading to the Martyrs' Memorial after landing at the airport, Erdoğan placed a wreath at the memorial in memory of Algeria’s independence war against French invaders.
"We are determined to enhance ties with African countries," Erdoğan told reporters in Istanbul before his departure. The president is expected to hold a joint news conference with his Algerian counterpart Abdelmadjid Tebboune following their bilateral meeting in the capital Algiers. He will also attend a Turkey-Algeria Business Forum.

"I and Mr. Tebboune were together at the Berlin conference [on Libya]. We also held bilateral meetings there," Erdoğan said. "We will also have the opportunity to discuss our bilateral relations in detail in meetings with the president and other officials."

According to a statement by the Turkish Presidency, a "Turkey-Algeria High-Level Cooperation Council will be established through a joint statement set to be signed by the two presidents over the course of the visit."

"We will also discuss current developments in our region, especially in Libya," Erdoğan said.
Not possible to expect understanding from Haftar

Commenting on reports of violations of the truce struck in Libya, Erdoğan said Haftar's forces had repeatedly violated the cease-fire in Libya, adding that international support for Haftar forces has been "spoiling" Haftar.
"First of all, Haftar is a putschist," Erdoğan said adding: "At this point, we need to see clearly what Haftar's identity is. He is a man who has betrayed his superiors before as well. It is not possible to expect mercy and understanding from someone like this on the cease-fire.”
"He's continuing attacks with all his resources. However, he will not be successful here,” Erdoğan also said.
Turkey has repeatedly said Haftar must choose a political solution to the conflict and urged foreign powers to press the putschist general into a truce. It has also sent military advisers and trainers to help the legitimate government fend off Haftar's assault on Tripoli.
Ankara has said that it will abide by a United Nations arms embargo on Libya as long as the cease-fire is maintained, but it warned that it could also deploy troops if necessary.
In Berlin, foreign powers agreed to form a special committee made up of five military officials from each side to monitor the truce. But Erdoğan said on Sunday he did not expect a result from that committee due to Haftar's stance.
Several countries backing rival factions in Libya have violated an arms embargo which they had agreed to uphold a week ago at a summit in Berlin, the United Nations said on Saturday.
Despite efforts by Turkey and Russia, Haftar abandoned talks on a cease-fire in Moscow earlier this month and his blockade of Libyan oilfields overshadowed a summit in Berlin last week aimed at shoring up a shaky truce.
His forces aim to capture the capital, Tripoli, through the backing of Egypt, the United Arab Emirates, Russian mercenaries and some African troops. Turkey meanwhile backs Fayez al-Sarraj's internationally recognized Government of National Accord (GNA).
Since the ouster of late ruler Moammar Gadhafi in 2011, two seats of power have emerged in Libya: One in eastern Libya supported mainly by Egypt and the United Arab Emirates, and the other in Tripoli, which enjoys U.N. and international recognition.

Pointing out trade volume between Turkey and African countries, Erdoğan said: "[The trade volume] has reached $26 billion, a 381% increase in the last 17 years as a result of our efforts."

Erdoğan's visit to Gambia will be of historic importance as "it will be the first-ever official presidential visit to this country," the statement added.

Gambia will count as the 28th country in Africa that Erdoğan has visited over the course of his terms as prime minister and president. The Turkish president's last stop in Africa will be Senegal.

"Various agreements aimed at strengthening the contractual bases of the bilateral relations with these countries are likely to be signed during the visits. Business forums are also planned to be held in Algeria and Senegal," the statement said.