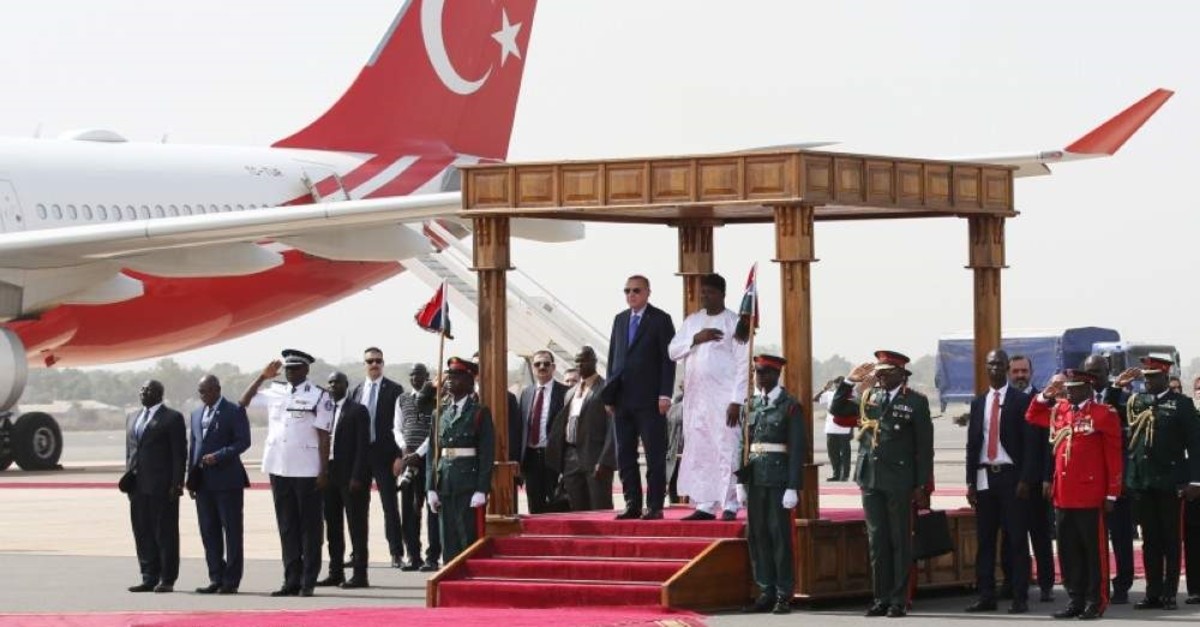 Erdoğan's 3-day diplomatic visit to African nations continued with Gambia, where the fight against the Gülenist Terror Group (FETÖ) made headlines, as well as military, economy cooperation

Turkey’s “leader diplomacy” in Africa continued in Gambia, the second stop on a three-country trip by President Recep Tayyip Erdoğan, who held meetings in the nation to discuss major issues in the fight against terrorism, the Libya crisis and developments in the Eastern Mediterranean.

Arriving to the West African nation in the early afternoon, Erdoğan attended a bilateral meeting with President Adama Barrow, who has been ruling the country since 2017. The main item on the agenda for the two leaders was the fight against the Gülenist Terror Group (FETÖ), which formerly had a strong presence in the African nation going back many years. However, the reign of the terrorist group in Gambia ended following a failed coup attempt in Turkey in 2016, after which the African country became one of the leading supporters of Turkey in its fight, shutting down schools run by FETÖ across the country.
"The initiation of direct flights between Banjul and Istanbul marks an important point in our bilateral relations, which continue to strengthen day by day," Gambian President Barrow said in a news conference with Erdoğan.
President Erdoğan also praised the improving relations between the two countries, and emphasized the strengthening trade ties.
"In 2019, the bilateral trade volume between Turkey and Gambia reached $55 million. We want to carry out our bilateral trade toward a more balanced structure," he said.
The President also answered a question from the journalists regarding the Libya crisis.
"[Libyan warlord Khalifa] Haftar’s spokesperson’s statement that the solution is at the tip of the gun barrel is a confession of their true intentions," he said.
Erdoğan also touched upon FETÖ activities in the western African country, and thanked the Gambian government for their efforts against the terrorist group.

Military cooperation with Gambia was another topic that was approached during the meeting as a contributor to Turkey’s presence in Africa.

Gambia is the 28th country in Africa that Erdoğan has visited over the course of his terms as prime minister and president. The Turkish president's last stop in Africa will be Senegal.

The ties between the two countries were established in 1965, when Gambia gained independence from British colonial rule. Yet it took 45 years to open Gambia's diplomatic mission in Ankara. Gambia opened its embassy in Turkey in 2010 while Turkey opened its mission in Banjul in 2011.

Their trade volume is not that high as Turkey had only $45 million in exports to Gambia in 2018, according to Turkish Statistical Institute (TurkStat) data. The volume slightly increased last year and amounted to some $48.91 million in the January-November period, TurkStat data showed. Turkey’s sales to the West African nation totaled some $47.51 while its imports stood at only $1.4 million.

Despite the low trade volume, Turkey provides a large extent of Gambia’s total electricity. In December 2018, Turkey’s Karpowership Company, the designer and builder of the world’s first floating power plants and the global brand of Karadeniz Holding, inked a deal with Gambia’s National Water and Electricty Supply Company Ltd. to deploy a Powership of 35 MW for a period of 2 years. Karadeniz Powership Koray Bey has been in operation in Banjul since April 2018. Karpowership has been supplying up to 60% of Gambia's total electricity needs.

The Africa trip of Erdoğan started on Sunday with the president’s first stop, Algeria, Turkey’s second-largest trade partner in Africa, during which the two countries expressed commitment to increase bilateral trade volume to $5 billion from the current level of around $3.1 billion.

Turkish exports to the country stood at $2.03 billion while imports from Algeria totaled $1.13 billion in 2018, according to the Turkish Statistical Institute (TurkStat). In the period of January-November of last year, Algeria’s exports to Turkey totaled $655.7 million and its imports from Turkey reached $1.7 billion.

Turkey’s investments in the country stand at around $3.5 billion. Through a joint statement signed by Erdoğan and his Algerian counterpart Abdelmadjid Tebboune during the visit, the Turkey-Algeria High-Level Cooperation Council was also established.

Erdoğan’s diplomatic initiative to Africa was defined as “Leader Diplomacy” by the Directorate of Communications of Turkey recently, explaining the purposes of the trip as well as the country's steps regarding diplomatic issues.

Turkey aims to fulfill its part as a playmaker in global and regional politics through such diplomatic visits. With a historical legacy in the region, Turkey’s role in Africa is to be a guarantor state, taking strategic security steps that would prevent terrorism and war in the continent.

Another important subject that lies behind Turkey’s Africa initiative is to expand the country’s economic options and reach different markets in sectors like energy. Within the scope of this overall purpose, the Algeria visit was organized with an aim to build stronger ties economically. Similarly, in Senegal, the aim is to further cooperation reached during the two countries' golden age of the last decade.

Through these diplomatic visits, Turkey is gradually turning into a strong brand on the African continent, which, in return, contributes to the country via the fields of trade, education, sports and tourism.

The visit is also expected to contribute to the protection and sustainability of the achievements in the eastern Mediterranean.

The deal that was signed between Turkey and Libya shows that the country is open to any deal offers from eastern Mediterranean countries and wants to see peace and stability in the region.

Turkey has embassies in 42 countries and commercial counselors in 26 countries on the Africa continent. Turkey’s national flag carrier Turkish Airlines also flies to 38 destinations on the continent.

In 2005, the Africa year, Turkey officially started its initiative for Africa and prepared the Strategy for the Development of Relations with African nations. After holding the first Turkey-Africa Cooperation Summit in 2008, relations were sealed under the Turkey-Africa Partnership and a new phase was launched in 2010.

Erdoğan’s last stop in Africa is Senegal. Various agreements aimed at strengthening the contractual bases of the bilateral relations with these countries are likely to be signed during the visits. Business forum is also planned to be held in Senegal.