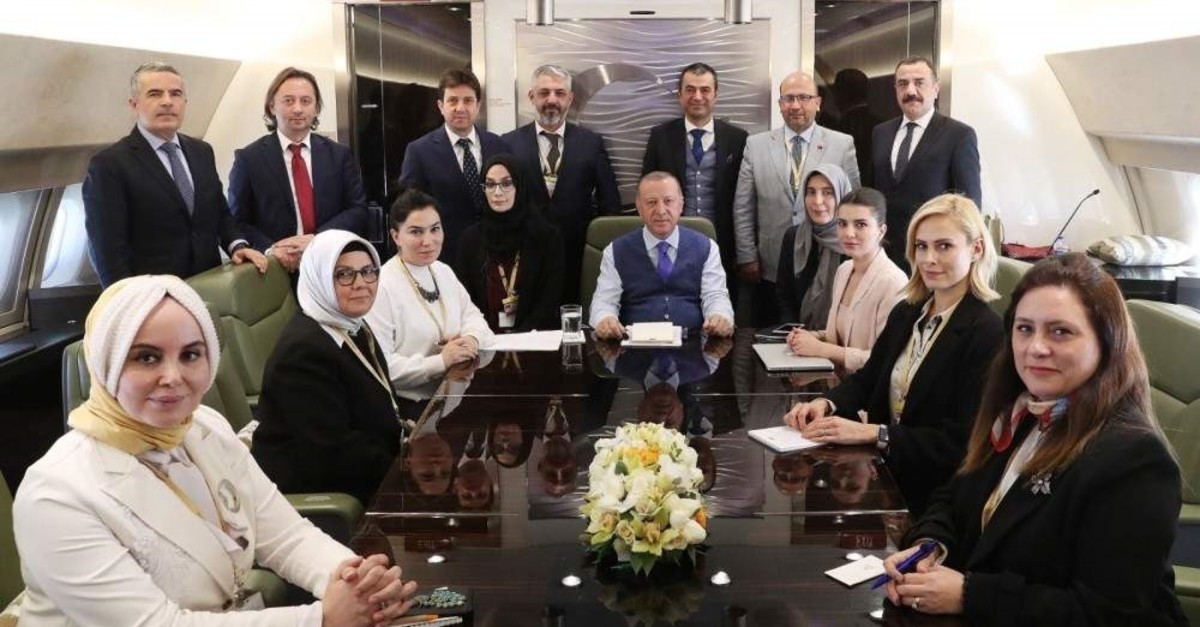 President Recep Tayyip Erdoğan expressed his conviction that the conflict in war-ravaged Libya would end despite the uncompromising stance of putschist Gen. Khalifa Haftar, who has vowed to take power

The road map for the Libyan crisis has been determined and the U.N.-recognized Government of National Accord (GNA) has abided by all decisions taken so far while putschist Gen. Khalifa Haftar, who fled from truce talks in Moscow and Berlin, is continuing to violate the cease-fire, President Recep Tayyip Erdoğan said Monday.

Speaking to journalists on his way from Algeria to Gambia, Erdoğan stated that Haftar has to be stopped if there is to be peace in Libya.

Referring to Haftar's spokesman Ahmed al-Mismari's statements Sunday, the president said: "Mismari has stated that they did not go to Berlin and Moscow for a solution, but to explain their alleged rightful cause. This is a statement giving away Haftar's real purpose."

Mismari openly declared Sunday that Haftar forces are seeking a military solution instead of a political one in the ongoing Libyan crisis, thereby undermining the international community's efforts for peace and a cease-fire.

"Haftar is currently like Libya's desert landlord – having control over the desert areas yet being weak in the regions where the population is," Erdoğan continued.

The president further explained that he told German Chancellor Angela Merkel during her visit to Istanbul on Friday that Egypt and the United Arab Emirates are Haftar's biggest supporters while Russia is lending support to Haftar's forces.

"The Abu Dhabi administration is financing Wagner and giving them arms and weapons. Despite all this (support), Haftar's plans went wrong. It is essential that (GNA Prime Minister Fayez al-) Sarraj is at the head of all powers. Sarraj gave an important test in Moscow and came. He also came to Berlin and was ready to come to terms, while the other one (Haftar) fled," Erdoğan said.

The president said that he believes with each day, the process is developing in favor of the Sarraj administration, giving the example of Haftar's attempt to seize a district that was immediately taken back by GNA forces. "But the most important issue is Sirte. If it is taken back, much will be done. They are interested in Misrata, but they did not get the result they wanted," he added.

On Jan. 12, the conflicting parties announced a cease-fire in response to a joint call by the Turkish and Russian presidents. But the talks for a permanent cease-fire deal ended without an agreement after Haftar left Moscow without signing the deal. Similarly, an attempt of the international community to find a solution to the Libyan crisis in the German capital Berlin on Jan. 19 remained inconclusive. Since then, attacks of Haftar's forces have continued without regard to civilians.

Erdoğan also pointed out that Turkey will be in close cooperation with Algeria on the matter and emphasized that the country is Libya's most important neighbor and could play a significant role in the political process.

"Russia entering Libya with Wagner is not right and is one of the biggest mistakes in my opinion. There are more than 2,500 mercenaries. Actually, Haftar is also a mercenary. They work together," Erdoğan said.

The conflict deepened in April last year when Haftar, who controls much of the south and east of Libya, launched an assault to seize Tripoli. Since the ousting of late ruler Moammar Gadhafi in 2011, two seats of power have emerged in Libya: one in eastern Libya supported mainly by Egypt and the UAE and the other in Tripoli, which enjoys U.N. and international recognition. The GNA led by Sarraj has been under attack since April by Haftar's forces, with fighting killing over 280 civilians and 2,000 fighters.

Answering a question on recent Turkey-European Union relations, Erdoğan said that the EU acts inconsistently, at times showing goodwill while stalling at other times. Erdoğan explained that the visa exemption process for Turkish citizens was supposed to be completed in 2014, but the EU always found something to drive Turkey into the corner.

"Chancellor Merkel is saying that she is outside of this issue and that she is leaving office. At the time (when Turkey applied for EU membership), there were only 15 chapters; now there are 36, 37. Meanwhile the number of member countries rose to 27, 28 from 15. They are unfair and their excuses about Turkey are obvious. What they say at the moment is, 'Turkey is a country with a huge population. We cannot take Turkey,'" the president said, adding that the EU's pretexts continue.

Signing a partnership agreement with the European Economic Community (EEC) in 1963, Turkey applied for EU membership in 1987, was confirmed as a candidate in 1999, and accession talks began in 2005. But negotiations stalled in 2007 due to objections of the Greek Cypriot administration on the divided island of Cyprus as well as opposition from Germany and France. Ankara, which maintains the strategic goal of EU membership, has been calling for some time now for the EU to conclude the process either way instead of stalling.

Erdoğan further indicated that the quadrilateral summit with Merkel, French President Emmanuel Macron and U.K. Prime Minister Boris Johnson that was slated for February could meet in March instead.

The president also touched upon the recent 6.8 magnitude earthquake in Elazığ, which killed 41 people and injured 1,607 others.

A reporter asked Erdoğan: "(Opposition Republican People's Party (CHP) leader Kemal) Kılıçdaroğlu calls refugees from Idlib 'terrorists.' But we have seen a Syrian refugee rescue a mother from the rubble during the Elazığ earthquake. What's your take on this, Mr. President?"

"What can we say about this man?" Erdoğan answered. "He is totally unaware of what brotherhood is. (Syrian refugee) Mahmood digs up the rubble by hand and rescues people, but Kılıçdaroğlu utters such remarks. We are continuing our efforts. We are now building briquette houses in Syria's Idlib," he said.

"Instead of freezing in the cold, may they be warm inside those homes. Our target is to build 25,000 briquette houses there. I told Merkel about this and she has accepted to appropriate 25 million euros for the project," he said.

Responding to whether Turkey will grant citizenship to the Syrian refugee in Elazığ, Mahmood, Erdoğan said the government would make this happen.

"Of course. He also speaks a bit of Turkish. We will also grant his family citizenship, too," he said.

Ties between FETÖ and CIA

The president also touched upon the recent developments regarding Gülenist Terror Group (FETÖ). Erdoğan answered a question about the fact that Enver Altaylı, one of Kılıçdaroğlu's advisers, was found to have links to FETÖ.

"Altaylı has been engaged in letter diplomacy with FETÖ, with over 40 letters on record. He also undertook a lot of tasks on behalf of the CIA," he said.