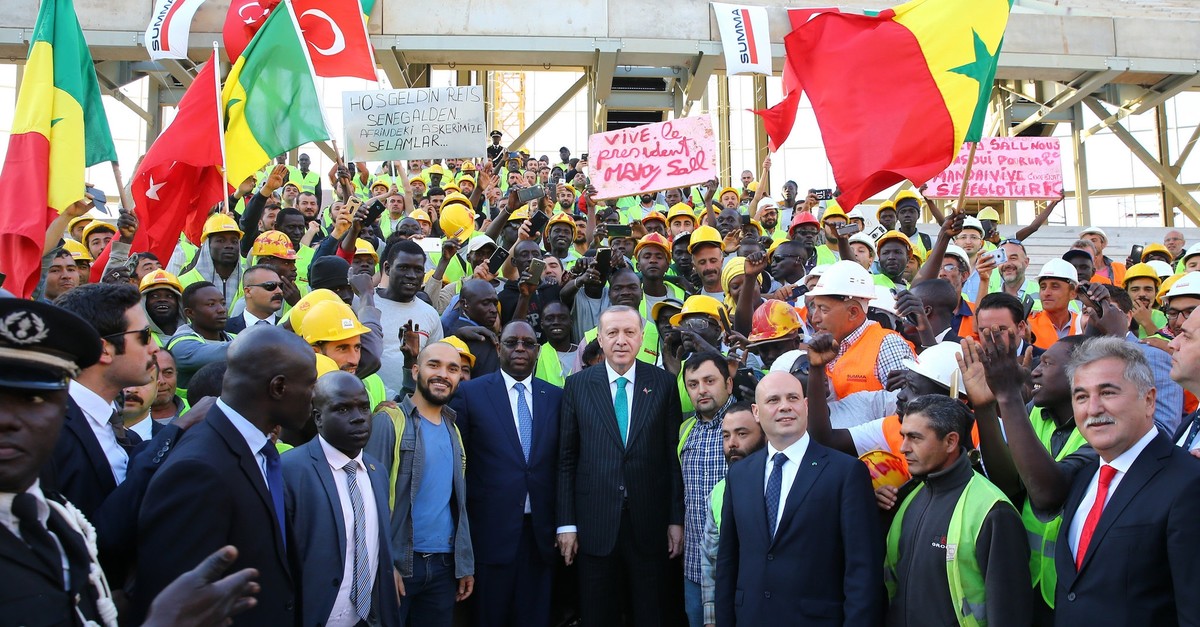 This file photo dated April 3, 2018 shows President Recep Tayyip Erdou011fan and his Senegalese counterpart Macky Sall visiting a construction site undertaken by Turkish companies in Dakar, Senegal. (AA Photo)
by daily sabah Jan 27, 2020 3:39 pm
Senegalese people are preparing a warm welcome for Recep Tayyip Erdoğan, ahead of the president's visit Tuesday. According to Anadolu Agency reporting from the streets of Dakar, many in the West African country associate Turkey with hospitality, football and the president.

Presenter Ousseynou Dianka of national broadcaster RDS said the Senegalese people had been preparing a warm welcome for the Turkish president, who they pledged would surely feel at home when he arrived in the country. Dianka said Turkey's investments and support in the country greatly contribute to the economy and education in Senegal.

Momo Diallo, a Senegalese entrepreneur, told AA that when he heard something about Turkey, the image of President Erdoğan automatically came to mind, referring to the latter as a "great leader" who maintains a principled stance as he strives to push his country forward.

University student Ibrahim Ousmane Salaou also said Erdoğan was the first figure that came to mind at the mention of Turkey, calling him a "dynamic president."

Others, such as Djibril Gueye, said they first thought of Turkish hospitality when they heard the country featured in the news.

Young entrepreneur Jean Doudou Faye said he identified Turkey with its success on the football pitch but also noted Senegalese people's appreciation of the country's contributions in the field of education.

Senegal is a country of hospitality and is open to the world, Faye said, adding that Turkey was more than welcome to expand its relations with the country.

In 2018, he visited Algeria, Mauritania, Senegal and Mali in a bid to boost relations with the continent. He also visited African countries in May 2016 and December 2017 with a focus on enhancing trade and diplomatic relations, as well as combating the presence of the Gülenist Terror Group (FETÖ) schools in the continent.

Serving as the then-prime minister, Erdoğan initiated the "Africa opening" policy in 2005, which has significantly boosted bilateral trade and diplomatic relations between Turkey and African countries in the past 15 years.
Last Update: Jan 27, 2020 7:14 pm
RELATED TOPICS