US expresses solidarity with Turkey after Assad regime attack in Idlib 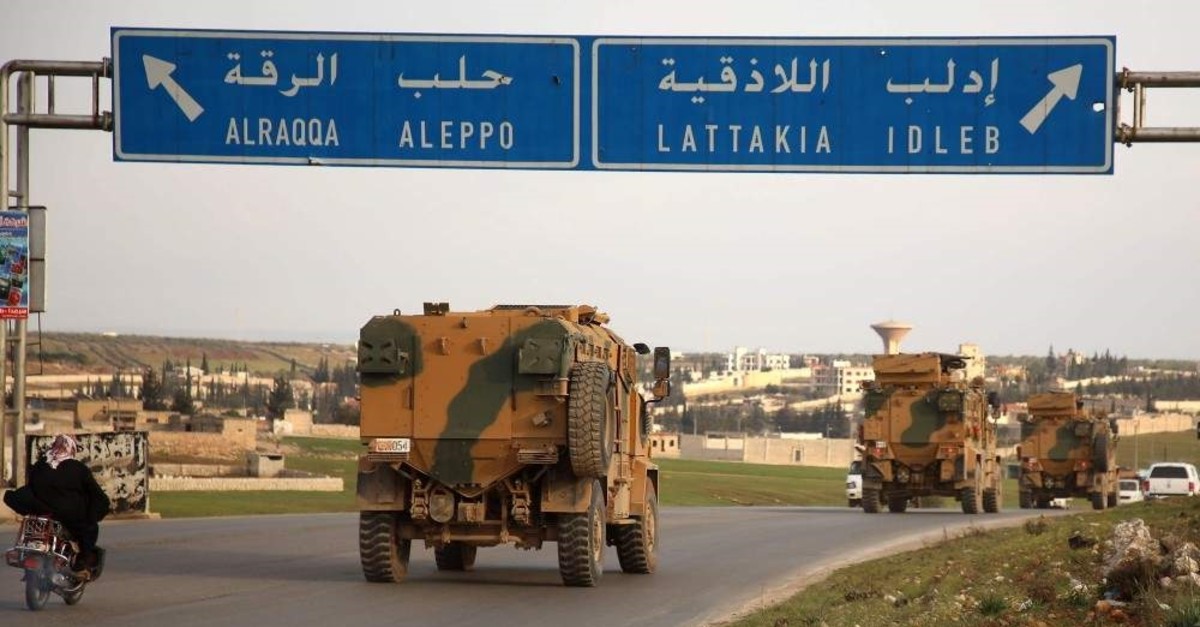 Turkish military vehicles drive in a convoy headed for the south of Idlib province as they pass by the town of Atareb in the western countryside of Aleppo on Feb. 3, 2020. (AFP Photo)
by Daily Sabah with AA Feb 04, 2020 8:50 am
The U.S. has extended condolences for the Turkish troops killed in an Assad regime attack in Syria’s northwestern Idlib province, while expressing solidarity with Turkey for its legitimate right to self-defense. "The February 3 mortar attack on Turkish observation posts by the Assad regime forces is a grave escalation and follows ongoing vicious attacks impacting civilians, humanitarian workers, and infrastructure," U.S. Secretary of State Mike Pompeo said in a statement late Tuesday.
"We stand by our NATO Ally Turkey in the aftermath of the attack, which resulted in the death of multiple Turkish personnel serving at an observation post used for coordination and de-escalation, and fully support Turkey’s justified self-defense actions in response. We send our condolences to the Government of Turkey on their deaths," the top diplomat added in the statement, underlining that "brutal actions by the Assad regime, Russia, the Iranian regime, and Hizballah are directly preventing the establishment of a ceasefire in northern Syria."
"These barbaric attacks must cease, humanitarian access must be granted, and peace must be restored in line with UNSCR 2254. The United States will do all in its powers to block any reintegration of the Assad regime into the international community until it complies with all provisions of UNSCR 2254, including a nationwide ceasefire that incorporates Idlib," he concluded.
"We stand by our NATO ally Turkey against these actions, send condolences to the Turkish government on the deaths of their people and fully support Turkey's justified self-defense actions in response," a State Department spokeswoman also told Anadolu Agency on condition of anonymity.
"We are consulting with the Turkish government on this matter," she added.
The deadly attacks in Idlib province killed seven Turkish soldiers and one civilian contractor working with the Turkish military. Thirteen other individuals were injured but are in good condition, according to Defense Minister Hulusi Akar.
Turkey struck over 50 targets in retaliation and killed 76 Syrian soldiers, said Akar.
Idlib has been the stronghold of the opposition and anti-government armed groups since the outbreak of the civil war.
It is currently home to some 4 million civilians, including hundreds of thousands displaced in recent years by regime forces from throughout the war-weary country.
"The destabilizing actions of Russia, the Iranian regime, Hezbollah and the Assad regime are hindering the establishment of a nationwide cease-fire in Syria as called for in UNSCR 2254 and the safe return of hundreds of thousands of displaced persons in northern Syria to their homes," the spokeswoman said, referring to a 2015 U.N. Security Council resolution that called for a cease-fire in Syria and a political settlement of the conflict.
"The United States will do all in its power to block any reintegration of the Assad regime into the international community until it complies with all provisions of UNSCR 2254, including a nationwide cease-fire which incorporates Idlib," she added.
There are 12 Turkish observation posts that were established as part of a deal signed between Turkey and Russia to prevent Assad regime attacks in Idlib.
NATO also extended condolences Tuesday for the Turkish soldiers killed in the regime attack in Idlib.
Speaking to Anadolu Agency (AA), a NATO official said: “We expressed our condolences to Turkey today at the North Atlantic Council.”
The North Atlantic Council is the principal political decision-making body within NATO. It oversees the political and military processes relating to security issues affecting the whole Alliance. Meeting under the chair of NATO General-Secretary Jens Stoltenberg, it brings together representatives of each member country to discuss policy or operational questions requiring collective decisions.
Idlib, the last opposition enclave in Syria, had a prewar population of 1.5 million. The number swelled to around 3 million with new refugee waves after it was designated a "de-escalation zone" under the Astana agreement between Turkey, Russia and Iran in May 2017. The agreement was intended to pave the way for a permanent political solution in Syria. The Turkish military set up 12 observation posts in Idlib's de-escalation zone after the ninth round of Astana-hosted peace talks.
Although Turkey and Russia agreed to stop acts of aggression and turn Idlib into a de-escalation zone, the Syrian regime has consistently violated the cease-fire, launching frequent attacks inside the de-escalation zone.
Following eight months of relative calm provided by the Sochi deal, the Assad regime intensified its attacks starting April 26, under the pretext of fighting Hayat Tahrir al-Sham (HTS) militants holed up in Idlib.
As a guarantor state for Damascus, Russia is responsible for preventing attacks by the Assad regime and Iran-backed militia groups, which have repeatedly violated last year's Sochi agreement between Ankara and Moscow.
Turkey has become the primary destination for civilians fleeing Syria as a result of the ongoing conflict in the country. While supporting a political solution to the crisis, Turkey has also been fighting terrorist organizations like Daesh and the YPG/PKK in Syria, which pose a national security threat.
Ankara has long complained about the lack of support from Western countries and the international community for the humanitarian crisis and the anti-terror fight in Syria, frequently claiming that the country has been “left alone.”
Last Update: Feb 04, 2020 9:33 pm
RELATED TOPICS