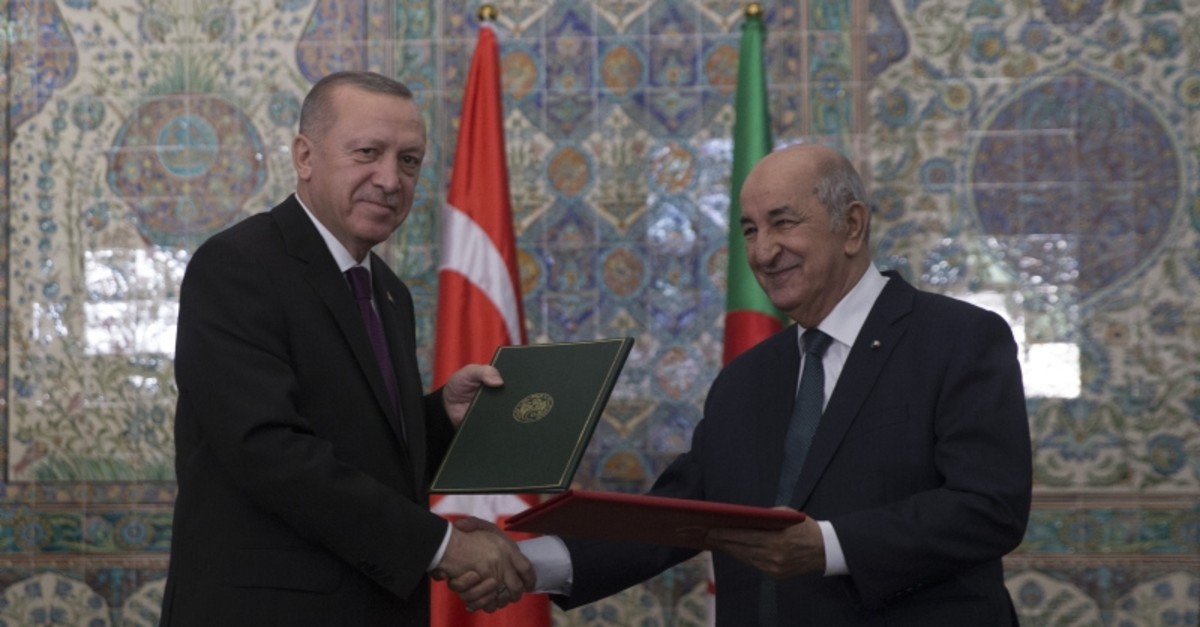 As relations between Turkey and Algeria broaden in several respects, the two countries are determined to find a sustainable solution based on peace for the Libyan conflict that is adversely affecting the region

The efforts of Turkey and Algeria, as well as the intensified efforts of the United Nations for finding a permanent, peaceful solution to the Libyan conflict, have seen results, while the ongoing talks for a lasting cease-fire in the war-torn country seem promising, Algerian Ambassador to Ankara Mourad Adjabi stated.

“There is significant coordination and an understanding between Turkey and Algeria; it is thanks to the joint efforts of the two countries that the Berlin conference took place, which can be described as a direct result,” the ambassador said in an exclusive interview to Daily Sabah, adding that the two countries should continue to work toward their common objectives regarding the Libyan conflict.

Pointing to bilateral visits between Algeria and Turkey, the ambassador indicated that Foreign Minister Mevlüt Çavuşoğlu paid two visits in three months to Algeria, followed by the historic visit of President Recep Tayyip Erdoğan when they tried to find a peaceful political solution.

“For the first time since the outbreak of this conflict with the regrettable intervention of NATO in 2011, in particular France and the U.K., we have seen major developments in Berlin. This was the very first time the U.N., the EU, the African Union (AU) and the most important players, whether regionally or globally, decided to meet and discuss with a view to finding a durable solution that would be peaceful and political, including all Libyan stakeholders with the international communities' support,” the ambassador elaborated, underlining that the conference was the first genuine and serious attempt to find a solution and the starting point of a “promising process.”

Fighting has continued on the ground despite a call for a cease-fire by Turkey and Russia starting on Jan. 12 and an international summit on Libya in Berlin on Jan. 19 aimed at putting an end to foreign interference. Last week the Geneva talks under the auspices of the U.N. took place for the first round of talks between eastern Libya based putschist Gen. Khalifa Haftar and the internationally recognized Government of National Accord (GNA) based in the capital Tripoli.

“Geneva is the transformation of a truce into a sustainable cease-fire,” the ambassador continued. “Although there was no agreement, both sides agreed on the need to expedite the resettlement of IDPs and agreed on an understanding to restore normalcy to conflict-affected areas.”

“The situation continues to be complex, but there is a truce. Talks are ongoing, while there is a heavier engagement of the U.N. and the AU,” Adjabi said, indicating that Algeria is happy to see that the AU is now involved in the search for a solution to the conflict in Africa.

“It is not easy to find a solution for a conflict that lasted for nearly a decade and worsened with foreign interference; yet, there is no alternative – the alternative to peace is war,” he said.

Algerian President Abdelmadjid Tebboune in his inaugural speech following the presidential elections on Dec.12 listed the Libyan conflict as one of the priorities of Algeria in terms of its foreign policy. He pledged that the new Algeria will spare no efforts to find a solution to the conflict in Libya – a country with which Algeria shares a 1,000-kilometer border as well as a common past and future.

The ambassador further elaborated that Algeria started a process to listen and talk with all parties, starting with Libya's Prime Minister Fayez al-Sarraj and Çavuşoğlu, Egypt, Italy, Khalifa Haftar, Saudi Arabia, the United Arab Emirates and the AU.

Besides causing a humanitarian disaster within the country amid ongoing clashes and civilian casualties, the war in Libya has also taken a heavy toll on the region and neighboring countries.

“The region is facing heavy threats, including terrorism, the smuggling of arms, illegal trafficking, migration and endangering the region's peace and stability,” Adjabi stated, explaining that Algeria was among the very first victims of the Libyan conflict when terrorists coming from Libya mobilized to blow up a vital oil facility in Algeria’s Tiguentourine in the south, constituting around 15% of total output, which was hindered by the Algerian army.

The ambassador further indicated that the spread of terrorism in the Sahel region was dangerous, which was one of the reasons why Algeria proposed hosting negotiations between Libyan stakeholders and reiterated this aim during the AU’s recent summit on Monday in Addis Ababa, Ethiopia. The importance of finding African solutions for African problems was underlined during the summit, while it was also highlighted that Libya is growing more complicated, with "sophisticated" arms being smuggled to the Sahel region from the country.

Since the ouster of late ruler Moammar Gadhafi in 2011, two seats of power have emerged in Libya: Haftar, supported mainly by Egypt and the UAE, and the GNA, which enjoys U.N. and international recognition.

“The two countries entered a new era in bilateral relations,” the ambassador stated, highlighting that President Tebboune will visit Turkey this year, following President Erdoğan’s invitation. Adjabi further indicated that during this visit the first session of the High-Level Cooperation Council will be held.

Mentioning that Erdoğan’s recent visit was the fourth to Algeria, after his two visits as prime minister and now two as president, the ambassador said that it was a very successful visit with historic initiatives and projects planned, including the setting up of the High-Level Cooperation Council for the first time which would convene once every two years and would be co-chaired by the two presidents. The first session of this council will take place most probably in the coming months, he added, saying that it would supervise the implementation of all the decisions made in various fields.

Indicating that the reconvening of the joint commission is also another significant initiative that could take place next month in Algeria, Adjabi said it had not taken place for the last eight years until the two presidents recently decided to revive it again.

Algeria and Turkey will also open cultural centers in each other’s countries.

Saying that the bilateral trade volume represents about $4 billion at present and is expected to be raised to $5 billion, Adjabi specified that Turkey is the first investor in Algeria outside the sector of hydrocarbons with $3.5 billion invested so far. The main sectors of bilateral cooperation are construction, textile, steel, energy and pharmaceuticals. Yet, the ambassador elaborated that Algeria aims to find new fields of cooperation beside the traditional ones.

Algeria is the largest country in Africa, covering an area of 2,381,741 square kilometers, and possesses a sizable amount of natural gas and petroleum deposits, which makes it the fourth-biggest economy in the region. With a 1,200-kilometer Mediterranean shoreline, the country is an important gateway to global trade for Africa.

“We are also planning to organize here in Turkey for the first time a huge meeting that would involve economic operators and businesspersons of the two countries in various fields, and this mechanism is to be institutionalized, in other words, we expect such a meeting to take place every year, alternately in Turkey and Algeria,” the Algerian ambassador said, underlining that the prospects of cooperation are highly promising.

Mentioning the ancient bonds of fraternity between the two people, Adjabi said, “For a long time the history of the world and the history of the region has been written by outsiders, by Westerners, and it is more than urgent to rewrite our common history by ourselves.”

Turkey’s relationship with Algeria dates back to the 16th century when Ottoman Navy Adm. Barbaros Hayreddin Paşa came to the country in 1516. The North African country was an Ottoman vassal state from 1519 to 1830, when the French invaded and colonized the country. The two countries celebrated the 500th anniversary of bilateral ties in 2016.

Diplomatic relations between Ankara and Algiers were instituted in 1962 when Algeria reclaimed its independence from French colonialists.