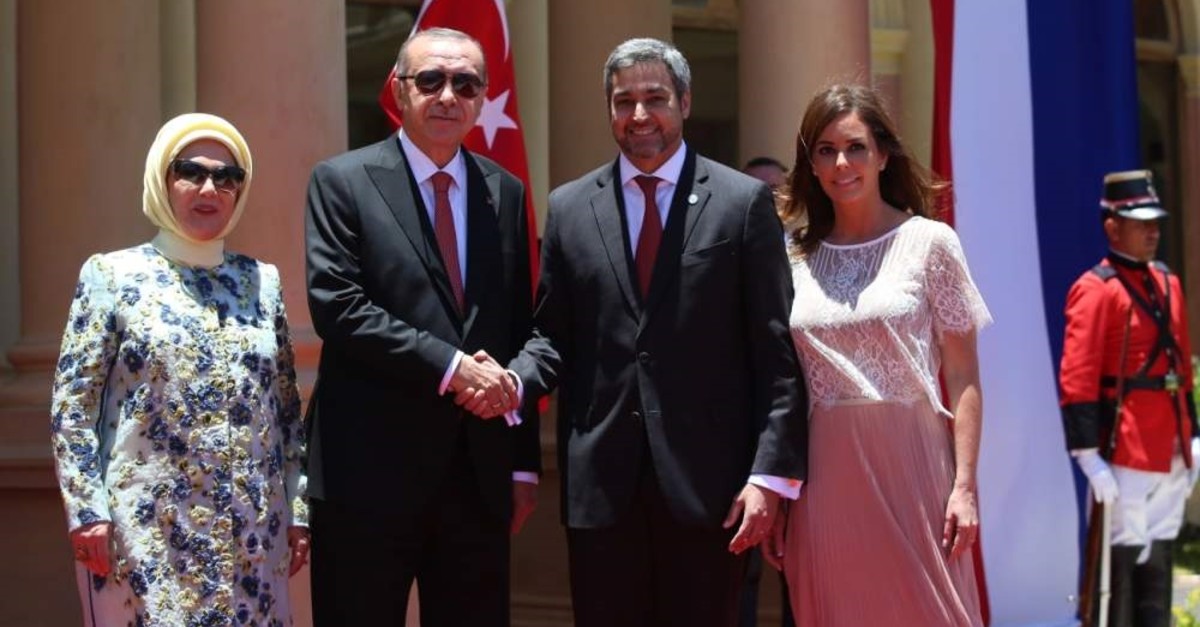 Despite the ocean between them, Turkey and Paraguay recently tapped into their shared economic potential and are now keen to make up for lost time.

After President Recep Tayyip Erdoğan's visit to his Paraguayan counterpart Mario Abdo Benitez in December 2018, the two leaders developed a close friendship and decided to open embassies in Ankara and Asuncion.

"The most important point in the history of our relations is the visit of President Erdoğan to Paraguay," the South American nation's Ambassador to Turkey Ceferino Adrian Valdez Peralta told Anadolu Agency.

"From that point on, we opened the embassy here in Turkey, which on Feb. 12 marked its anniversary. That visit was very important because a close friendship between the presidents began. And this year we expect our president to visit Turkey," he said.

He added that Paraguay's vice minister of foreign affairs will visit Turkey for a defense summit in the coastal Mediterranean city of Antalya in March.

Paraguay – a landlocked country of nearly 7 million people between Argentina, Brazil and Bolivia – is home to large swaths of swampland, subtropical forest and chaco – or "hunting land" in the native Bolivian language Quechua – with savannas and scrublands ideal for cattle ranching.

Valdez said representatives found, only after opening the embassy, that Turkey has "high-quality products and very good prices, which is very important."

"We are talking about a trade volume around $330 million, of which $300 million is Paraguay's and $30 million Turkey's exports. We have to take these numbers to another era now," he said.

Endowed with dozens of mighty rivers that translate into electric power in hydroelectric dams, including Itaipu and others, Paraguay is one of the largest producers and exporters of renewable energy in the world.

It is also one of the founding members of South American trade bloc Mercosur, also known as the Southern Common Market, along with Brazil, Argentina and Uruguay. Venezuela was suspended in 2016.

Valdez said negotiations with Bolivia for full membership in the bloc continue and are expected to be finalized soon.

After 20 years of strenuous negotiations, the EU concluded a political agreement with Mercosur at the end of June, which still needs ratification by the EU Commission, EU Parliament and parliaments of Mercosur members.

Diplomatic spats between the presidents of France and Brazil about the Amazon, as well as disgruntled European farmers who think the deal undercuts agricultural and beef products across Europe, would likely delay the official start date of the EU-Mercosur trade deal.

Valdez stressed that the pros of the deal outweigh its cons for all parties involved.

Valdez said bilateral ties have already been enhanced by various agreements between Ankara and Asuncion, trade associations and NGOs, and he added that Paraguay, one of the most stable countries in South America with low inflation and sustainable economic growth, is happy to see "business growing."

"Paraguay is discovering Turkey and its potential for refrigerators, air conditioners, agricultural and medical equipment, and electric cars, soon," he said. "We need Turkey. Paraguay is investing in infrastructure; we will build four bridges and we need to get products from Turkey like steel and construction companies to help us grow quickly."

He drew attention to Turkey's geographical advantage for Paraguay as it is "halfway" in terms of transportation of goods compared to Asia and the Far East – the region it has so far relied on for most of its imports.

"We also work on authorization from the Turkish government to export more beef, soybeans and other agricultural products, including stevia, which you can find here in the markets," he said, highlighting the quality of Paraguay's traceable all-natural products.

"The simit you eat can be made with organic sesame from Paraguay," Valdez said.

Explaining incentives for Turkish investors, he said Paraguay has a very low energy cost, an easy legal framework for new business formations and a vibrant young population in the heart of the Americas.

Speaking about the growing soft power of Turkey in Latin America, the Paraguayan envoy said Turkish soap operas are hugely popular in his country, where parents started to give Turkish names to newborns.

"We have so far found 45 Turkish names that are getting popular," he said.

Valdez thanked authorities for accepting three Paraguayan students to Turkish universities and highlighted the importance of more educational and cultural exchange between the friendly nations.