Turkey to stand with Pakistan on Kashmir issue, Erdoğan says 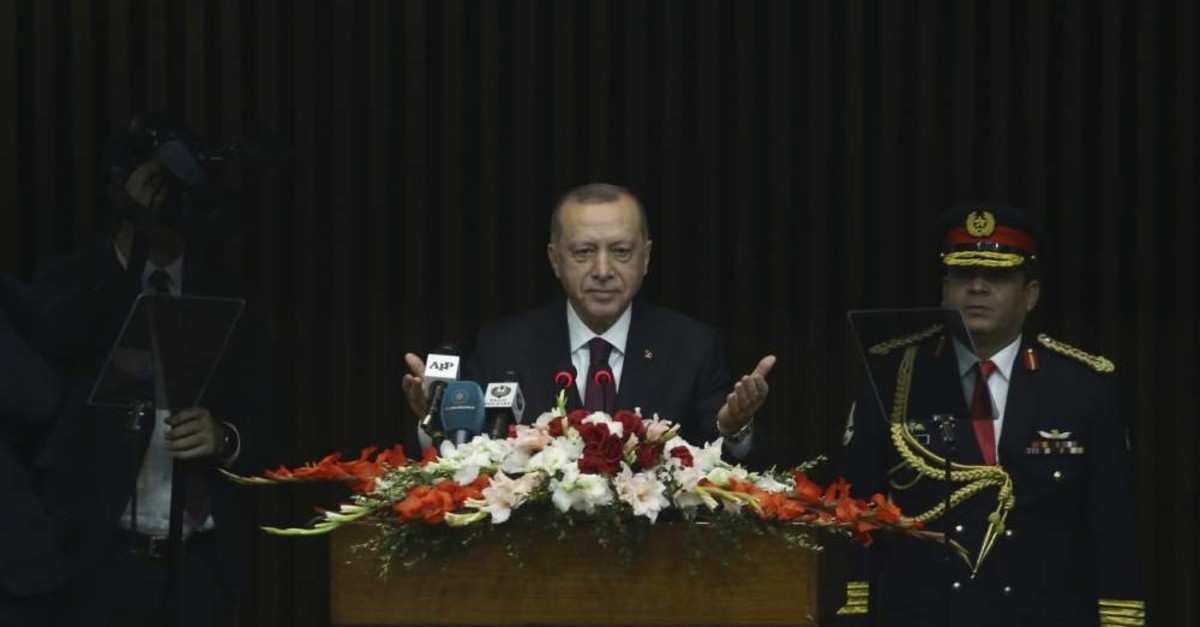 President Erdoğan underlined the importance of the Kashmir issue for Turkey, reiterating the country's support to Pakistan for a solution on the basis of justice and equity

The issue of Kashmir is as important to Turkey as it is to Pakistan, President Recep Tayyip Erdoğan said on Friday, noting that Turkey has not forgotten the Pakistani people's help during the Turkish War of Independence.

Addressing a joint session of the Pakistani parliament, Erdoğan thanked Pakistan for always standing beside Turkey in times of crisis.

"And now, we feel the same about Kashmir today. It was Çanakkale yesterday and Kashmir today; there is no difference between the two," Erdoğan said, adding that Turkey will continue to support Pakistan.

"This approach, which aggravates the current situation and revokes the freedom and vested rights of the Kashmiri people, benefits no one," Erdoğan said.

"The Kashmir problem can be solved not by conflict or oppression, but on the basis of justice and equity," he added.

"Turkey is in favor of resolving the Kashmir issue by taking into consideration the expectations of our Kashmiri brothers, through dialogue based on UN resolutions," Erdoğan also said.

The president also said Turkey appreciates Pakistan's contribution to the peace process in Afghanistan, as he noted that Turkey will continue to support Pakistan in its fight against terrorism.

Erdoğan also underlined that the relations between Pakistan and Turkey are based on true brotherhood, solidarity and fraternity, and Pakistan has shown that it is a true friend of Turkey with its stance on Gülenist Terror Group (FETÖ) and support for the anti-terror operations in Syria.

Praising Pakistan for standing beside Turkey in times of crisis, Erdoğan said Pakistan has been a true friend of the country as it closed FETÖ-linked schools in the country and supported Turkey's anti-terror operations in northern Syria to secure its borders.

Pakistan stands with Turkey's righteous cause, he said, referring to Turkey's anti-terror Operation Peace Spring launched last October in northern Syria, despite others who work to protect terrorists.

"The goal of the steps we've taken in Idlib in recent days is to prevent 4 million oppressed people from dying under the barrel bombs of the (Assad) regime. Turkey's top priority is to stop the bloodshed, demolition, oppression and tears in all conflict zones from Libya to Yemen," Erdoğan said.

During its 2016-2019 presidency of the Organization of Islamic Cooperation (OIC), Turkey actively engaged in all matters concerning the Islamic community, he said.

Appreciating Pakistan's efforts to combat terrorism, the president said: "Pakistan is a country that has suffered from instability, terrorism and conflicts in its region. As a country that has been fighting separatist terrorist organizations including Daesh, the PKK and FETÖ for 35 years, we understand the challenges Pakistan faces and we will continue to support Pakistan in its efforts against terrorism."

The YPG/PKK has taken some 40,000 lives in its more than 35-year terror campaign on Turkey, and FETÖ infiltrated national institutions to launch a defeated coup attempt against Turkey in 2016.

"Today, Mr. President (Recep Tayyip Erdoğan) made a historic speech in the Pakistani parliament and I can say you can win the next election in Pakistan after this address," Khan said in a lighter mood at the Pakistan-Turkey Business and Investment Forum.

Khan said Erdoğan won the hearts of Pakistani people with his speech.

The Pakistani prime minister noted that all parliamentarians – including those in the opposition – appreciated Erdoğan's speech.

"It's a great tribute to you, Mr. President. It shows the love and affection that people have for you in Pakistan," Khan added.

Later in the day, Khan thanked Erdoğan for his support on the Kashmir issue, adding that nearly 8 million people are living in an open prison in Kashmir.

"There are currently attacks against Turkey in Syria, Pakistan will always stand with you on this issue," he added.