Erdoğan, Putin reiterate commitment to all agreements on Syria's Idlib 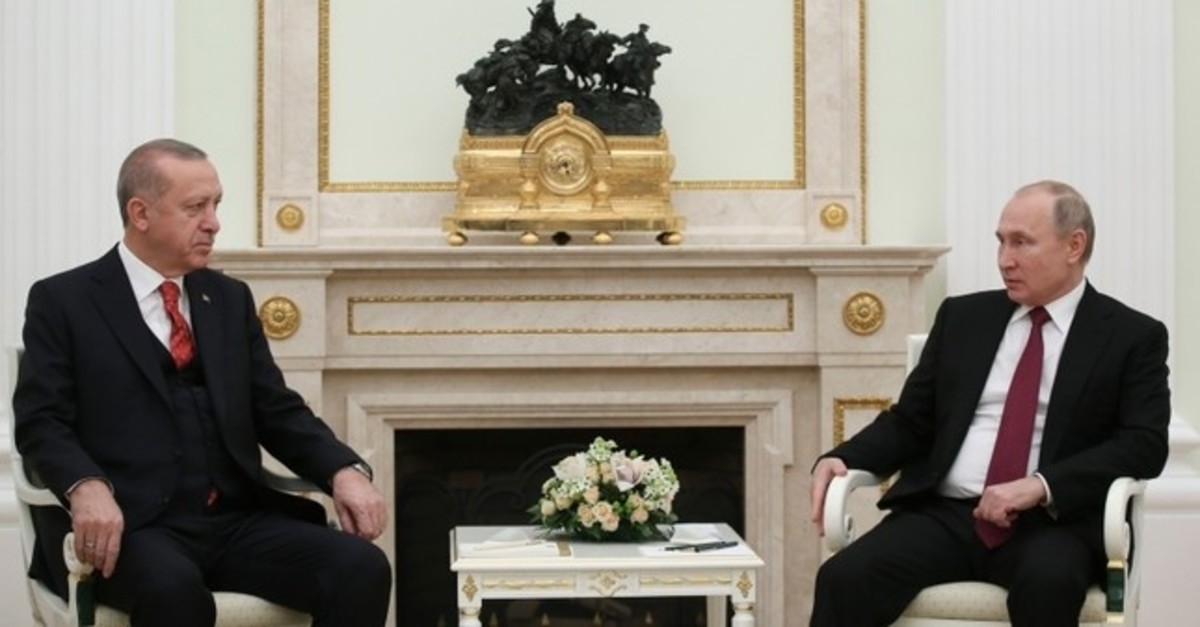 President Recep Tayyip Erdoğan and his Russian counterpart Vladimir Putin discussed late Friday the developments in war-ravaged Idlib town in northwestern Syria, which has recently seen a humanitarian disaster due to heavy bombardments by the Assad regime and its main backer Russia. In the phone call, the leaders reiterated their willingness to fully implement all agreements regarding measures to defuse tensions in the city.

According to a statement by the Presidency, Erdoğan told Putin it is imperative that Assad regime's actions and the consequent humanitarian crisis must be stopped in Idlib, and that the Sochi deal must be implemented in full.

According to the statement, developments in Libya were also discussed.

On Thursday, German Chancellor Angela Merkel and French President Emmanuel Macron told Putin that they want to meet him and President Erdoğan to defuse the crisis in Syria.

A months-long offensive by Russia-backed Assad regime against moderate opposition backed by Turkey in northwest Idlib has seen close to one million civilians fleeing the violence.

The two European Union leaders "expressed their willingness to meet President Putin and President Erdoğan to find a political solution to the crisis," the chancellor's office said.

Merkel and Macron "called for the immediate end to the fighting and unfettered humanitarian access to people in need," their statement said.

Speaking on Friday, Kremlin spokesman Dmitry Peskov said Russia is discussing the possibility of holding such a summit on Syria with the leaders.

"The possibility of holding a summit is being discussed. There are no firm decisions about it yet. (But) if all the four leaders deem it necessary, we do not rule out the possibility of such a meeting," Peskov told reporters on a conference call.

Russia on Wednesday objected to the U.N. Security Council adopting a statement that would have called for a cease-fire in Idlib, diplomats said, after a tense closed-door meeting.

The U.N. urged neighboring Turkey to admit the newly displaced people but Ankara is resisting as it already has some 3.7 million Syrians on its territory.

In retaliation for Assad regime attacks martyring Turkish soldiers, he said that Turkish and moderate opposition groups had destroyed 12 tanks, three armored vehicles, 14 howitzers and two pickup trucks in Idlib, where fighting continues with forces loyal to the Assad regime, and its Russian and Iranian allies.

He added that some 150 regime forces had been neutralized.

"Unless the regime stops the persecution of the people of Idlib at this point, it is not possible to withdraw from there. We can only reach a truce this way. First, the cruelty will stop here," Erdoğan said.

Turkish forces are in the region as part of a cease-fire deal reached in September 2018 which has been often violated.

On the one million civilians fleeing attacks by Assad and his allies heading to the border with Turkey, Erdoğan said: "Our efforts continue there. Across our border we are building brick sheds to protect them from harsh weather conditions. Turkey's National Disaster Management Agency (AFAD) along with the Turkish Red Crescent also continues to provide them food and other needs."

He also said Merkel promised to give €25 million ($27 million) for the Syrians in Idlib and he urged Macron to do the same.

"I told Macron, 'Look, Merkel gave her support, and we expect the same support from you'," he said.

The Syrian regime, however, has repeatedly violated the cease-fire, including martyring 14 Turkish soldiers in three attacks in February.

Since Syria's civil war erupted in 2011, the country has never seen so many people displaced in so short a time.

In nine years, millions of civilians have fled their homes and more than 380,000 have been killed.