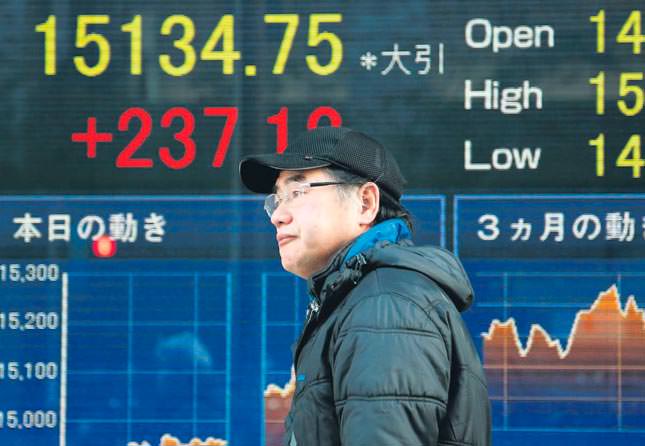 The fresh figures will turn the focus on to Bank of Japan (BoJ) policymakers as they start a two-day meeting with speculation they could unveil further monetary easing measures to counter a possible slowdown from a sales tax increase next month.
There are fears the rate hike, seen as crucial to bringing down Japan's massive national debt, will hit consumer spending and in turn dent the country's nascent recovery.

The world's third largest economy expanded 0.2 percent in the quarter to December and 1.5 percent through 2013, the latest data showed. Earlier results showed gross domestic product grew (GDP) 0.3 percent for the October to December period and 1.6 percent in 2013.

However, the new figures still mark Japan's best annual performance in three years as Abe's growth blitz of big spending and monetary easing, dubbed Abenomics, rippled through the economy. The economy grew 1.4 percent in 2012 and contracted 0.5 percent in 2011, owing much to the March 11 quake-tsunami disaster and subsequent nuclear crisis. "The recovery... lost pace in the second half of the year," said London-based Capital Economics. "Nonetheless, it would be premature to conclude that Abenomics has failed based on these figures alone. After all, private consumption and business investment were stalling before PM Abe's election, but have picked up speed since then. The problem instead lies on the external side."

A key reason for the downward revision was weak exports as Japan's trade imbalance ballooned on the back of surging energy bills aggravated by the shutdown of its nuclear reactors in 2011 in response to the Fukushima crisis. Atomic power once supplied about a third of the resource-poor nation's energy.

In separate data yesterday, the deficit in the January current account, Japan's broadest measure of trade with the rest of the world, more than quadrupled to another record figure of 1.589 trillion yen ($15.4 billion). The growing imbalance was driven by the soaring costs of imported energy made pricier by a weak yen and lackluster growth in shipments of Japanese goods abroad. Critics fear that the controversial tax increase to eight percent from five percent will curtail the budding recovery in an economy beset by years of falling prices that curbed spending and business investment.

Still, Abe's efforts to stoke the economy have been bearing fruit. Since the conservative swept national elections in late 2012, the yen lost about a quarter of its value against the dollar, giving a boost to Japanese exporters.

The weaker currency helped the Nikkei shares index soar 57 percent in 2013, its best performance in more than four decades, while Japan's growth led G-7 nations in the first half of last year.

Abe called on firms to hike wages as consumers face higher prices for ordinary goods as many complain they have yet to reap the benefits of the growth campaign.

Tokyo also launched a special $50 billion stimulus package to counter any downturn from the nation's first sales tax hike since the late 1990s, which shortly preceded years of tepid growth. While Tokyo has also made some headway on its bid to stoke lasting inflation, consumer and corporate spending in the latter half of the year failed to take off, underscoring a still-cautious mood among households and in the country's boardrooms.

The tax rise is perhaps the biggest threat to Abe's efforts and led to speculation the BoJ will be forced to expand its already-unprecedented stimulus program. The multibillion- dollar scheme launched by the central bank is a cornerstone of Abe's policy. It also calls for deeper reforms, most yet to be seen, including free trade deals, more flexible labor markets and bringing more women into the workforce.