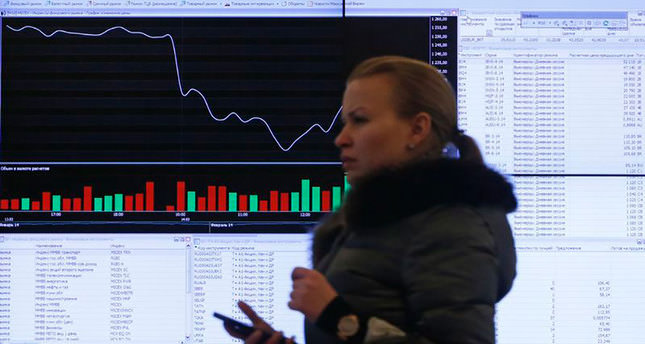 Moscow says Russia's economy is showing signs it could be headed toward a crisis, as the U.S. and the EU implemented a round of sanctions in response to the country's support for the Crimea region breaking away from Ukraine

MOSCOW – The worst standoff with the West since the Cold War is causing Russia's economy to weaken and the poor economic situation has prompted prominent politicians in Kremlin to speak up. "The situation in the economy bears clear signs of a crisis," Deputy Economy Minister Sergei Belyakov said in Moscow on Sunday. However, the cabinet needs to refrain from placing the fiscal burden on companies. "Taking money from companies and asking them afterward to modernize production is illogical and strange," he said.

Even before the political crisis over Crimea, Russia's economy was facing its weakest growth since a 2009 recession as consumer demand failed to make up for sagging investment. EU foreign ministers on Sunday agreed to freeze assets and impose visa travel bans on 21 Russian, Crimean and former Ukrainian officials, while U.S. President Barack Obama imposed sanctions on seven Russians.
The Ukrainian crisis is putting a strain on Russia's $2 trillion economy, which grew 1.3 percent in 2013 after expanding 3.4 percent the previous year. Last year's growth was "insufficient" and the current outlook and government forecasts "can't satisfy us," President Vladimir Putin said on March 12.

The Economy Ministry projects growth will average 2.5 percent per year through 2030. Russia will probably dip into a recession in the second and third quarters of this year as "domestic demand is set to halt on the uncertainty shock and tighter financial conditions," Vladimir Kolychev and Daria Isakova, economists at Moscow-based VTB Capital, said in a research note. They cut their 2014 growth estimate to zero percent from 1.3 percent.

The ruble has weakened 9.4 percent against the dollar this year, more than any other of the 175 currencies tracked by Bloomberg except the Argentine peso, the Ukrainian hryvnia, the Kazakh tenge, Zambian kwacha and the Kyrgyz som.

The currency's slide, exacerbated by intensifying tensions over Ukraine and the threat of sanctions, forced the central bank to look past sluggish growth and tighten monetary policy. Bank Rossii lifted its benchmark interest rate to 7 percent from 5.5 percent at an emergency meeting Mar. 3.

Consumer-price growth accelerated to 6.2 percent in February from 6.1 percent in Jan. 2013. Bank Rossii wants to keep inflation within 5 percent this year after missing its target range of 5 percent to 6 percent in 2013.

Morgan Stanley (MS) economists Jacob Nell and Alina Slyusarchuk cut their forecast for 2014 growth to 0.8 percent from 2.5 percent according to a note sent to clients yesterday. "We see Russia close to recession in the first half of 2014 as a result of the Ukrainian security crisis driving higher rates and risk premia, leading to weaker consumption and contracting investment," they wrote.

Capital outflow from Russia may reach $70 billion in the first quarter and there is "a real risk that this could push Russia into recession,"
London-based Capital Economics said in a report published yesterday.