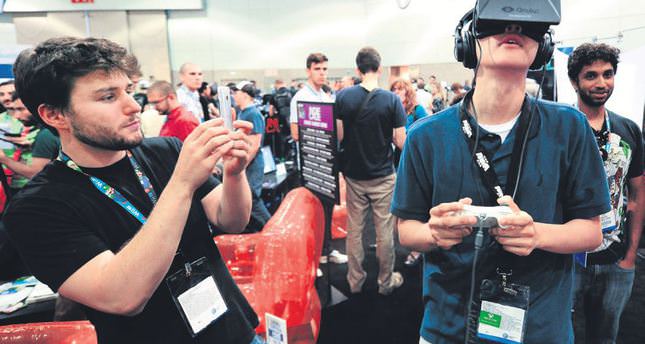 The popular social network has announced it will buy Oculus VR, which specialises in virtual reality products

NEW YORK — Facebook announced a $2-billion deal to buy a startup behind virtual reality headgear that promises to let people truly dive into their friends' lives.

"This is a long-term bet on the future of computing," said Facebook Chief Executive Mark Zuckerberg Tuesday on a call with analysts. "I believe Oculus can be one of the platforms of the future." Irvine, California-based Oculus VR Inc. makes the Oculus Rift, a virtual reality headset that's received a lot of attention from video game developers, though it has yet to be released for consumers. The headsets cover a user's eyes and create an immersive world that reacts to turning one's head or moving back and forth.

Beyond games, Zuckerberg said virtual reality headsets might someday be used to enjoy a courtside seat at a basketball game, study in a classroom, consult with a doctor face-to-face or shop in a virtual store. The technology also has social applications, he said. "Imagine sharing not just moments with friends online but entire experiences and adventures," he stressed. It is Facebook's second big acquisition in as many months.

Last month the social network announced that it would pay $19 billion for deal messaging startup WhatsApp, a deal that hasn't closed. "I don't think you should expect us to make multiple multibillion- dollar acquisitions within a couple months frequently," Zuckerberg said. But he called Oculus a "unique" company with a major lead on rivals in technology, engineering talent and developer interest. Sony Corp. unveiled its own prototype virtual reality headset at a game-developers conference in San Francisco last week. Zuckerberg said virtual reality technology is a computing platform unto itself, comparing it to personal computers, which revolutionized the world in the 1970s and 1980s, and mobile phones. Facebook Inc. said Tuesday that the deal includes $400 million in cash and 23.1 million shares worth about $1.6 billion.

Oculus employees are also eligible for an additional $300 million if the company achieves certain targets. Facebook Chief Financial Officer David Ebersman said Oculus was valued based on the expected returns from the video game industry alone, with a higher return expected if it can expand into communications, entertainment or other fields. Zuckerberg said Facebook intends to let Oculus continue with its roadmap of development but help out with recruiting, marketing, infrastructure and opening doors to new partnerships. He said he intends not to make a profit on hardware but instead make the product affordable and ubiquitous so Facebook can look at generating revenue from services, software, advertising, virtual goods or other areas. Facebook says Oculus has received more than 75,000 pre-orders for second-generation development kits for the headset at $350 apiece.

The kits are to ship in July. Sales of Oculus' development kits alone are 10 times bigger than all other headsets in the history of virtual reality, said Antonio Rodriguez, general partner of venture capital fund Matrix Partners, an early investor that put $18.5 million in Oculus starting last year. He said he decided to invest within minutes of trying on a pair of the goggles. Games he's seen being developed for the system include one where the player jumps off the side of a building and tries to avoid hitting things on the way down, and another where the player picks up and moves around blocks in constructing their own world. Rodriguez said virtual reality could be used to enhance virtual tours of homes for potential buyers and for getting a flavor for distant locations before planning a vacation, say to Cancun. "Short of the sunburn and the smell of the sweet Caribbean Sea, you're getting the whole experience," he said. "They're going to
change the world."