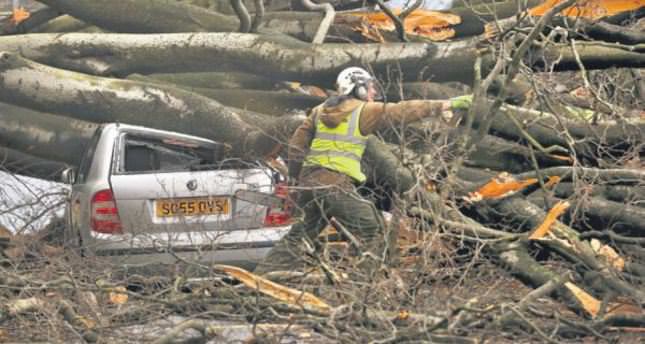 by French Press Agency - AFP Mar 26, 2014 12:00 am
ZURICH — Natural and man-made disasters caused $140 billion (TL 310.87 billion) of damage worldwide last year, according to a study released yesterday by reinsurance group Swiss Re. In its annual survey of disaster damage, Swiss Re noted total loss was down from the $196 billion recorded in 2012, the year that Hurricane Sandy battered the United States. Of the $140 billion recorded in 2013, insured losses accounted for $45 billion. The most expensive disaster for insurers was the massive flooding in central and eastern Europe in May and June last year, with Germany, the Czech Republic, Hungary and Poland hardest hit. Total economic losses in the floods hit $16.5 billion, of which $4.1 billion was covered by insurers.

While rich countries saw the most expensive single disasters in terms of insurance claims, the norm given their wealthier economies and extensive insurance penetration, it was the developing world that continued to bear the brunt of lives lost and overall economic damage.
The vast majority of the 26,000 disaster deaths last year, up from 14,000 in 2012, were in developing nations.

Asia, where like other poor regions only a small percentage of the population has insurance, was hardest hit. Typhoon Haiyan in the Philippines in November brought some of the strongest winds ever recorded, coupled with heavy rains and storm surges. Some 7,500 died or went missing, and over four million were left homeless. Haiyan inflicted $12.5 billion in economic damage, of which insured losses represented just $1.5 billion. The second biggest humanitarian disaster was the June flooding in India, which claimed 6,000 lives. With Phailin destroying some 100,000 homes and more than 1.3 million hectares of farmland, total economic losses were $4.5 billion, of which just a tiny proportion was insured. Swiss Re said the insurance industry needed to rethink how it could help the wider world deal with
the fallout of disasters.