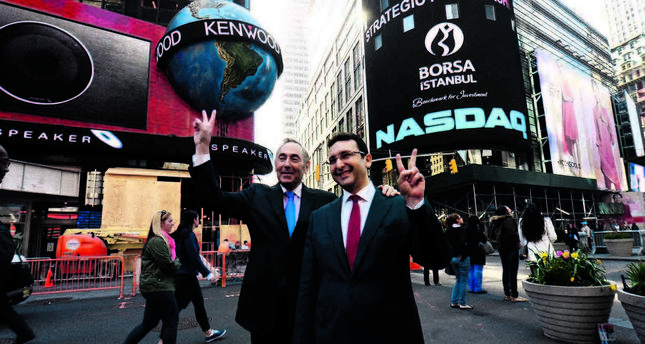 During his speech, BIST chairman İbrahim Turhan said Istanbul is an important center in the region and is making an effort to become a global finance center.

Turhan stressed Turkey's national income increased threefold from 2002 to 2012. "This is quite rapid growth. When such rapid growth is recorded, we normally expect the income distribution to be distorted. However, it proved to be even better in Turkey's experience.

As far as we know, this is the only example in the world. This was achieved thanks to the social policies the government pursued, especially the importance attached to the education of girls. Additionally, serious progress is being made in assistance to the elderly, the disabled and the ones in need of psychological support, namely in the areas of health and social security," Turhan remarked.

Turhan said as the middle class grows, a better democratic environment may be created. "Turkey has always complied with international law and principles. We are aware of our negative aspects, too," Turhan commented.

Turhan further stressed as long as governments do not spend money on investments, the private sector will or vice versa. He added, "The private sector in Turkey foresees a brilliant future for itself. Turkish exporters increased their global exports. It can be seen that this increase in exports was created by the boost in production."

Turhan noted the Turkish economy is quite diversified in comparison to its competitors and concluded, "Now, one out of three refrigerators sold in Europe is manufactured in Turkey and we sell small vans to Peru, which shows that we have a very flexible structure that is convenient for competition. The private sector has a special place in the Turkish economy."

Citi Group's Director of Governmental Relations Charles Johnston spoke at the event and commented on Turkey's economic and politic outlook. In his speech, Johnston recognized Turkey has been going through a stable period for more than 10 years, which is conducive to growth in Turkey. He noted Turkey's EU membership process also enhanced the Turkish economy. "Becoming a member of EU is an uphill task. However, it helps Turkey to develop and modernize its business environment,"

Johnston said. Highlighting the 63 percent foreign investors' share in Turkey's stock market, Johnston said, "This rate, which is promising for the future, has seen the BIST come to the forefront for international financiers."

Johnston also spoke about recent political developments in Turkey. He said Turkey is passing through a period which will mature its democracy. "Despite the rumors about Turkey, we foresee big opportunities in Turkey stemming from democracy and stability in country,"
Johnston predicted.

Speaking at the event, Vice Chairman of Nasdaq Meyer Sandy Frucher highlighted the developing democratic intuitions and their positive impact on the open market in Turkey.

Noting that Turkey has a great potential, "In spite of small problems that had a negative effect on the Turkish lira, the astonishing development of the middle class in Turkey gives us hope," Frucher said.

BC Partners Managing Partner Nikos Stathopoulos also addressed attendees, saying, "Turkey has always been stable in terms of taxes and laws. We never faced any surprises."

Stathopoulos told attendees of his company's investment in Migros, a retail supermarket in Turkey in 2008, Turkey's demographic structure, the decrease in interests and inflation rates and its growth performance. "Turkey is a very attractive country in both macro and micro aspects," he said. Stathopoulos stressed growth, an increase in the gross national product and stability in both politics and exchange rates are vital for attracting foreign investors. "People lean toward foreign shares when they are relaxed, when transparency, good management and high standards prevail. This is what we have seen for the last six years," he added.

Stathopoulos also highlighted he recognizes a growth potential in the BIST and that this potential should attract long-term investors. "I would like to invest in a country where I do not witness huge changes when I wake up in the morning in, for instance, taxes or regulations. If I have a problem, I am sure that Turkish courts would deal with my problem objectively. Thus, when issues like stability, growth and laws are taken into account, many people would want to invest in BIST," Stathopoulos concluded.