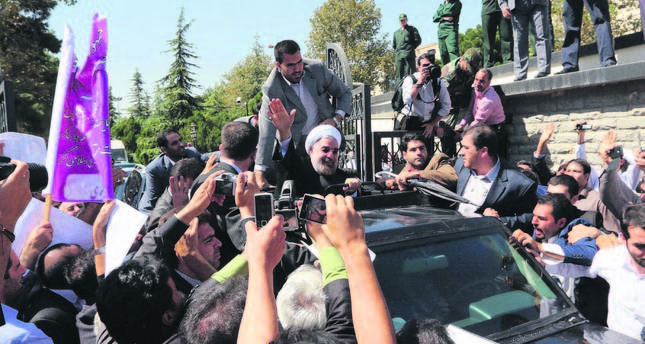 Iran's President Hassan Rouhani was elected on hopes that he could revive the country's economy struggling under sanctions, but the public's goodwill toward him is showing the first signs of fading

TEHRAN — Having raised expectations of more moderate rule and wider engagement after eight years under the acerbic leadership of Mahmoud Ahmadinejad, Iran's President Hassan Rouhani has established a cautious detente with the West since taking power last August. At home he has started to slow the inflation rate that stemmed from his predecessor's spending programs which, though meant to keep the economy going as Iran became more isolated because of sanctions, ultimately deepened its difficulties. His tenure has so far been played out mostly on the world stage over the chances of a deal to end global suspicion of Tehran's nuclear activities, but domestic pressures are now growing.Although there is a general acceptance that prospects for economic growth are positive under Rouhani, Iranians are being squeezed and they speak of being no better off now than when he took charge. "It's just the same," said Nahid Pakmiat, a retired university administrator, as she bought groceries in Ali Abad, a lower-middle class area of southern Tehran. Most sanctions remain in place and the economy is still in recession.

But no matter how tough the medicine, Rouhani's cabinet appears determined to pursue major reforms, including an overhaul of state subsidies for electricity, fuel and basic foods, which will hit the poorest people hardest. "There is a huge gap in society. The high costs mean the poor cannot afford meat, chicken and other goods that are considered essential to Iran's middle and lower-middle classes," said Pakmiat, 55. Petrol prices were hiked by as much as 75 percent on Friday, despite confirmation of the general hardship two days earlier when 95 percent of Iranians signed up for state aid, ignoring a government campaign that urged people to forgo the handouts. Annual inflation currently stands at 34.7 percent, according to the Central Bank, 5.7 percentage points down from 12 months ago. Despite the immediate impact of subsidy cuts, analysts say austerity measures are necessary after the previous economic mismanagement. "We are in a very difficult time, a stagflation situation, and it is hard to drive policy in this environment, since any measure to trigger growth will have inflationary consequences," Ramin Rabii, managing director of Turquoise Partners, which manages foreign funds on Tehran's Stock Exchange, told AFP. And although inflation remains Rouhani's top economic priority, higher electricity and petrol costs mean another short term price rise is likely, Rabii said, reiterating the lack of options open to the government.

"It is a matter of patience," he added, cautioning that while there is optimism about a possible nuclear deal, it would be wrong to put too much hope on it. Meanwhile, Western businessmen in Iran speak in stark terms of a negative outlook if a permanent accord with the P5+1 - Britain, China, France, Russia and the U.S. plus Germany - is not reached before a six-month interim agreement expires in July. Foreign businesses are also conscious of people's shrinking wallets and the pressure that conservative hardliners could apply on Rouhani if the economic situation does not improve, even if there is a deal to resolve the nuclear issue. With the subsidy cuts now imposed, there is frustration among people in markets and bazaars in areas such as Mokhtari, a poor part of southern Tehran, where talk of an end to the nuclear standoff seems almost irrelevant. "Prices are still increasing and my sales are down," said Ali Heydari, who for two years has run a small store in the neighborhood. "Life is no better."