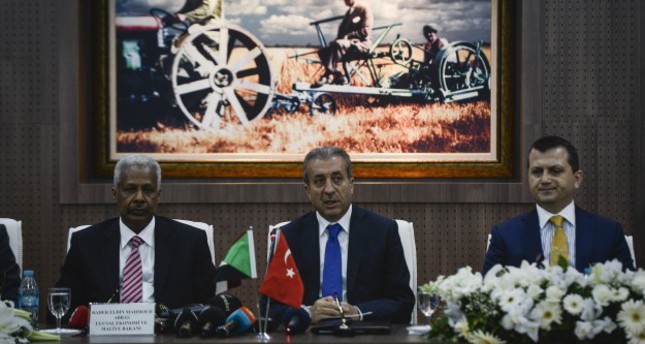 by Anadolu Agency
Apr 30, 2014 12:00 am
TURKEY — Turkey signed an agriculture cooperation agreement with Sudan, which gives the Turkish General Directorate of Agricultural Enterprises (TİGEM) and Turkish companies several options to operate in the African state.
According to the deal finalized on Monday, TİGEM and Turkish companies may invest directly in Sudan, engage in partnerships with local partners or fund agro-processing and food production projects. "Sudan has substantial agricultural land and the rainwater is enough for irrigation in some regions of the country," said Turkey's Food, Agriculture and Livestock Minister Mehmet Mehdi Eker at the signing ceremony.

He further noted that Turkey will build a pilot farm on 12,500 hectares in Sudan via TİGEM. Training for agriculture and livestock will be provided on this farm for Sudanese citizens. According to the minister, Turkish investors will be able to grow oil seeds as well on highly fertile land. The production will be intended for export. In addition to agriculture, the sides will also cooperate in livestock and fishery.

Through an agreement between the central banks of the two countries, steps will be taken for the coordination of monetary policies. The accord aims to use Sudan's land resources and export surpluses for Turkey and the rest of the world to contribute to solving the world's food shortage before another hike in food prices, Ibrahim Mahmoud Hamid, the minister of agriculture in Sudan said.