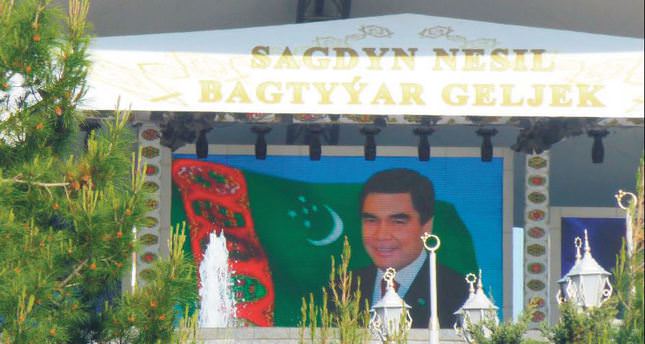 by Apr 30, 2014 12:00 am
ASHGABAT — Turkmenistan President Kurbanguly Berdymukhamedov ordered yesterday the scrapping of free monthly handouts of petrol to car owners, in a move aimed at relieving pressure on state coffers from the populist subsidy. Berdymukhamedov, who has assumed title of Arkadag (The Patron) as part of a rising personality cult, introduced the handouts in 2008, which entitled each private car owner in the Central Asian nation of 5.5 million to a monthly quota of 120 litres of petrol free of charge.

The move was designed at the time to cushion the gradual increase of the price for the fuel to 22 U.S. cents per litre from just 2 cents set under Berdymukhamedov's flamboyant predecessor Saparmurat Niyazov, who died in December 2006. The presidential decree published by state media yesterday said the abolition of free petrol handouts aimed "to help sustain the growth of the national economy, achieve the efficient use of oil products and ensure their orderly converting to cash on the domestic market". The country annually produces about 10 million tonnes of crude oil and processes most of it at local refineries.

Turkmenistan, which is viewed by human rights bodies as one of the most reclusive and repressive nations, boasts the world's fourth-largest reserves of natural gas and is Central Asia's largest producer and exporter of the fuel. While abolishing free quotas for petrol, Berdymukhamedov made no mention of natural gas, water and electricity consumed by the local population free of charge in huge volumes since Niyazov's rule, which was officially called "The Golden Age". Critics say the much-publicised handouts of energy and water to the population simply supplement low wages in the country which seldom rise above $300 a month. Turkmenistan's gross domestic product expanded by 10.2 percent last year, mainly on the back of rising natural gas exports to China.

The International Monetary Fund forecasts GDP to increase by 10.7 percent this year.