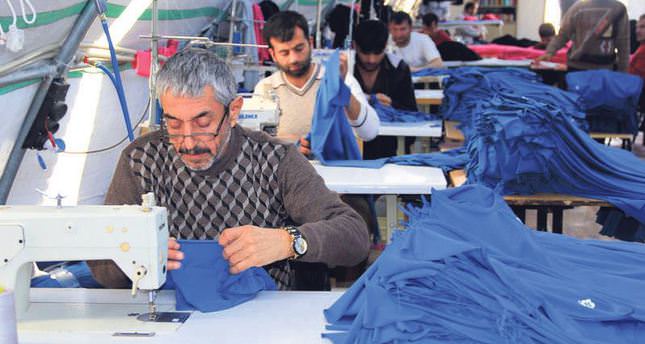 Union executives stated that although Turkey has been ruled by a government which is sensitive to workers, rights there is still room for reforms

ISTANBUL — The first day of May is officially celebrated as "Labor and Solidarity Day" in Turkey since 2008. A year after, the Turkish Parliament officially declared May 1 as a public holiday, which was a great gesture by government, say union executives. According to union senior managers, Turkey, a country with a rueful history of Labor Day, has been experiencing a relatively peaceful period thanks to the new regulations and reforms. Mehmet Erzurumlu, a textile industry employee working in Pendik, a small district of Istanbul, spoke to Daily Sabah regarding the history of Labor Day in Turkey. "In the 1970s and 1980s governments used to view the workers as a wild creature to be chained and tamed. Moreover, extreme leftist terrorist groups had abused the weakness of the working class, which is not as easily possible today," he concluded.

Speaking to Daily Sabah, Vice President of Memur-Sen Hacı Bayram Tonbul, which is the largest public workers union in Turkey with 707,652 members, said the last 10 years have brought many favorable amendments. "Most importantly, the referendum that was held in 2010 provided public workers with a collective bargaining right, which was not available before the referendum.

That is why we supported the campaign of 'Yes, but it is not enough' during the referendum rally of Prime Minister Recep Tayyip Erdoğan," Tonbul said.

He added that the new regulations implemented in the AK Party's 12 years of governing secured the retired officers' healthcare and financial rights as well. "As far as the information we obtained from the officers, we know that the government is set to prepare a new code regarding the rights of subcontractor laborers who are currently working in public institutions. He added that during the AK Party's rule, being a member of a union is promoted and eased. Mahmut Arslan, chairman of Hakİş, one of the largest labor unions in Turkey, spoke to Daily Sabah. In his statement he emphasized that Turkey has achieved dramatic developments in economics and human rights. "Political stability brought economic stability. With the economic stability, education and health facilities have been boosted, which served the workers most because citizens who are living above the poverty line were always able to reach health and education services, but the working class was not," he said.

Arslan also emphasized that in 2012 the government introduced a well-prepared "Occupational Health and Safety Law" which partly covered the gaps in the field. "The AK Party government, which has been in power since 2002, raised the minimum wage in accordance with inflation rates. The wage is still below a satisfying level, but not beaten by inflation at least," Arslan said, adding that with a new regulation introduced last year, workers and public officers can become members of a union by applying online, which he believes is a revolutionary act. "Thanks to the new regulation, workers are saved from notarizing fees, which used to be paid to become a member of a union."