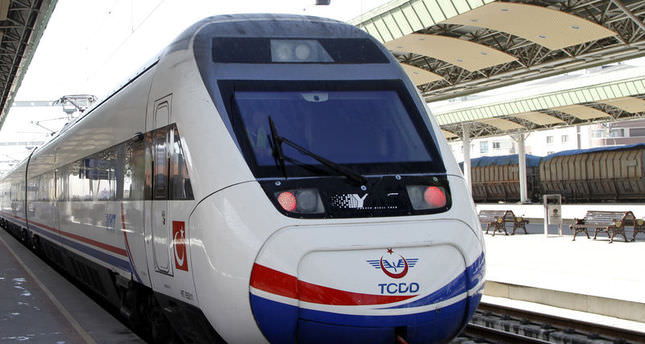 by AA May 02, 2014 12:00 am
ANKARA — High-speed train services will be launched in the second half of May between the capital city of Ankara and Istanbul, Turkey's the most crowded city of Turkey, transport minister said.

Turkish minister for transport, maritime affairs and communications, Lutfi Elvan, stated that he wants to relay the good news on the high-speed train service in Turkey, during a new conference after his meeting with Sudanese National Economy and Finance Minister Badr Eldin Mahmoud Abbas.

"Hopefully, the high-speed train service will start in the second half of May between Ankara and Istanbul. We will both inaugurate the service and begin train services."

It is expected that the travel time from Ankara to Istanbul will be shortened to 3.5 hours via the high-speed train.

There are currently three high-speed rail lines between Ankara, Konya and Eskisehir cities.

Turkey increased its investments in transportation as part of its "2023 Vision" program, which aims to celebrate the country's 100th anniversary of the establishment of the modern republic by developing major projects, such as building 11 thousand kilometers of new railway and expanding high-speed train networks.

Turkish State Railways had announced on January that it will invest almost half of its 2014 budget (1.8 billion lira) in high-speed train projects.