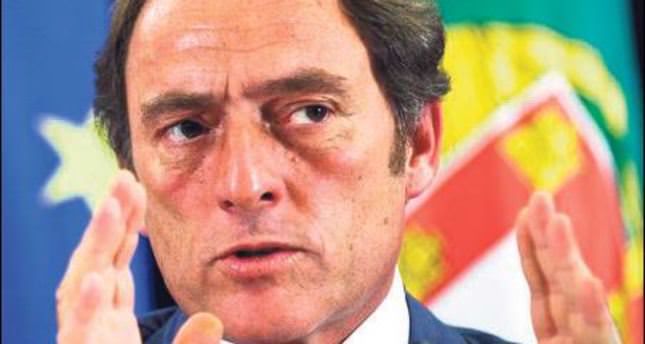 by May 03, 2014 12:00 am
LİSBON — Portugal has passed the final bailout audit by the International Monetary Fund and the European Union experts, the government said on Friday in a major step toward becoming the second Eurozone rescue success story after Ireland. "The 12th evaluation has been overcome, and this opens the way to the end of the program," Vice Prime Minister Paulo Portas told journalists, marking a big step forward from the national humiliation of near bankruptcy. Portugal is now set to emerge from the bailout on May 17 and is expected to try to finance itself on bond markets without a so-called safety net, becoming the second stricken Eurozone country to recover after Ireland. In a sign that the strains of the Eurozone debt crisis, which at one point threatened to break up the Eurozone, are fading, the Spanish 10-year borrowing rate dipped below 3 percent on the Eurozone bond market on Friday for the first time since 2005.
However, Portugal is still enacting the latest round of severe measures to keep its public finances within targets laid down by the International Monetary Fund, European Union and European Central Bank.

Rafts of reforms tied to rescue loans pushed the country into recession and the people into severe hardship, with cuts in pay, pensions and public services. Portas said, "Portugal has done what it had to do to be able to win back its financial autonomy, and this gives sense to and makes worthwhile the sacrifices made by the Portuguese people." The auditors, who began their last audit of progress on reforms on April 22, finished their work late on Thursday after marathon negotiations. Their approval of the national accounts and progress opens the way for the release of the last payment of 2.6 billion euros (TL 7.58 billion) of the total rescue package of 78 billion euros extended in May 2011.

Portugal has yet to lay out the procedures it intends to use to finance itself normally and fully on the international debt market. It is expected to follow the example set by Ireland and issue bonds without having the backup of a precautionary line of credit, a route which would be pinned on a high level of confidence that investors would subscribe substantially to buy the bonds. Prime Minister Pedro Passos Coelho said that he will make his decision known before Monday, when Eurozone finance ministers next meet.