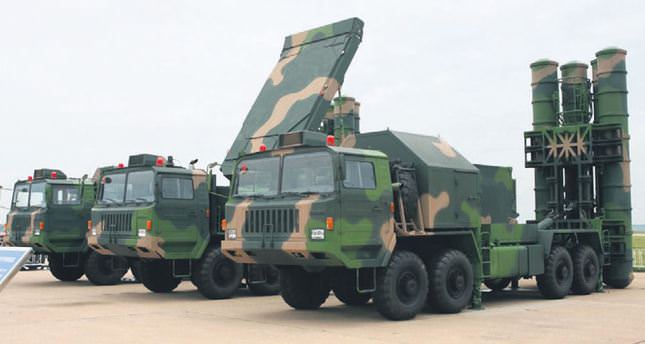 Although experts emphasize that the air defense system is compatible with NATO's defense network, allies criticizeTurkey's cooperation with a U.S.- sanctioned Chinese firm

Since the announcement of the decision, Turkey has come under strong pressure from its NATO allies. Furthermore, sources in the Turkish defense industry reported that European and U.S. defense companies pressured Turkish defense companies by indicating that partnerships in some areas might end if Turkey concludes the deal with the Chinese company.

In fact, the acquisition of such a multibillion- dollar strategic system naturally has multiple implications on political, economic, military and technologic dimensions, and despite all the pressure, Turkey's continuation with the Chinese company still seems the most probable option.

Furthermore, defense industry experts believe that the Chinese FD-2000 (HQ-9) air defense system is able to compete with its western rivals in terms of technical capability.

The HQ-9 air defense system was developed from the S-300 system that was imported by China from Russia in the mid 1990s. The Chinese defense industry progressively developed the system and added new capabilities.

A ship-based version of the HQ-9 was also produced under the designation HHQ-9, providing long-range missile and aircraft intercepting capability. The export version of HQ-9 is known as FD-2000. "The version of the HQ-9 that is capable of intercepting AWACS early warning and electronic warfare aircraft is designated FT-2000 and was introduced in the late 1990s," according to a defense industry expert who spoke to Daily Sabah anonymously. "The HQ-9 missile is reported to be capable of intercepting targets at a maximum range of 90-120 kilometers. The system can also shoot down incoming cruise missiles at medium and low altitudes. Target designation and fire control is accomplished through 3D phased array radar, which can be said to be in the same league as equivalent Russian or Western air defense systems," the expert added.

NATO countries raised objections against Turkey's move, claiming that missile systems within the trans-Atlantic military alliance must be compatible with each other. NATO insists the Chinese technology will not be compatible with the evolving ballistic-missile shield being built in Europe. However, Turkish Undersecretariat for the Defense Industry (SSM) officials repeatedly stated that Chinese missiles are compatible with NATO systems.

Regarding the missile deal, Prime Minister Recep Tayyip Erdoğan remarked earlier that it is natural for any country to make the decision that best suits its interests. On this basis the HQ-9 missile was considered the most competitively priced, and a significant portion of its production would be carried out in Turkey. In line with Prime Minister Erdoğan's remarks, Volkan Bozkır, the head of the Foreign Affairs Commission in Parliament, commented that Turkey would continue with the best option. "Turkey will choose the offer that is in our best interest,"

Regarding the argument that as a member of NATO, Turkey cannot buy weapons from a non-NATO ally, Bozkır countered by pointing out that many NATO allies are using Russian weapons systems.

The AFP investigation revealed that European countries have approved billions of dollars in transfers of weapons and military-ready technology to China. According to the AFP, China's air force relies on French-designed helicopters, while submarines and frigates involved in Beijing's physical assertion of its claim to vast swathes of the South China Sea are powered by German and French engines - part of a separate trade in "dual use" technology to Beijing's armed forces. The European Union imposed an arms embargo on China after its army killed many demonstrators in the 1989 Tiananmen Square crackdown. But member states are free to interpret the embargo loosely, the AFP report says. EU arms makers received licenses to export equipment worth $4.1 billion to China in the decade to 2012, according to annual EU reports on trade.

On the other hand, some analysts assert that U.S. sanctions against CPMEIC, which is the producer of the HQ-9 air defense system, will be another problem in concluding the deal. In fact, U.S. sanctions against CPMEIC go at least as far back as 1993 when it was sanctioned for transferring missile technology to Pakistan. The most recent round of U.S. sanctions against CPMEIC was in February 2013 when it was sanctioned alongside other Chinese persons and entities for selling Iran items banned under U.S. law. However, Turkish officials do not take seriously the threat of American and Western companies, and it seems like they will be out of the deal as long as they don't meet Turkey's demands concerning
technology transfers.