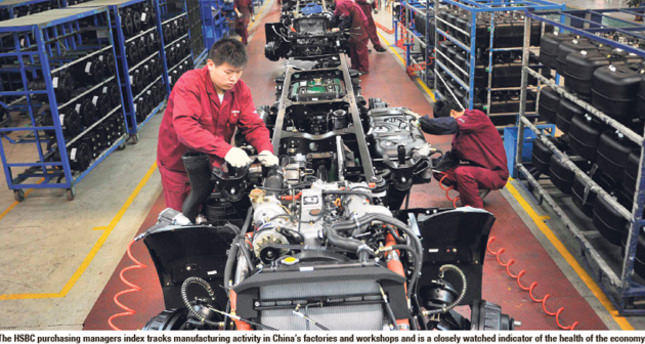 by May 06, 2014 12:00 am
ISTANBUL — Manufacturing sector contracted for a fourth consecutive month in April, HSBC said yesterday, the latest sign that the world's second-largest economy is slowing. The British banking giant's purchasing managers index (PMI) came in at 48.1 last month, slightly up from 48.0 in March but weaker than the 48.3 reported in its preliminary report on April 23. A figure below 50 indicates contraction while anything above points to growth. The index tracks manufacturing activity in China's factories and workshops and is a closely watched indicator of the health of the economy.

The report comes after the government's official PMI reading was released last week, which rose to 50.4 in April from 50.3 in March. Compared with the official reading, the HSBC survey - compiled by information services provider Markit and released by the bank - focuses more on smaller enterprises and uses a smaller sample.

Yesterday's figures showed domestic demand deteriorated at a slower pace but remained sluggish, while the new export orders and employment sub-indices both contracted, Qu Hongbin, a Hong Kongbased economist with HSBC, said in the statement. "These indicate that the manufacturing sector and the broader economy as a whole is continuing to lose momentum," he said. In the first three months of 2014 the economy grew 7.4 percent, weaker than the 7.7 percent in October-December and the worst since a similar 7.4 percent expansion in the third quarter of 2012. Beijing last month introduced a series of measures to bolster growth, including tax breaks for small enterprises and targeted infrastructure outlays. But Chinese leaders have publicly ruled out a massive stimulus package to kick-start growth as they try to pivot the economic model away from decades of double-digit expansion fuelled by big-ticket investment projects. Qu said bolder actions would be necessary "to ensure the economy regains its momentum." Asian share markets took a lower turn yesterday after the survey of Chinese manufacturing disappointed.

China's services industry fared better, according to a separate official PMI released on Saturday. That measure rose to 54.8 in April from 54.5 in March, the National Bureau of Statistics said.