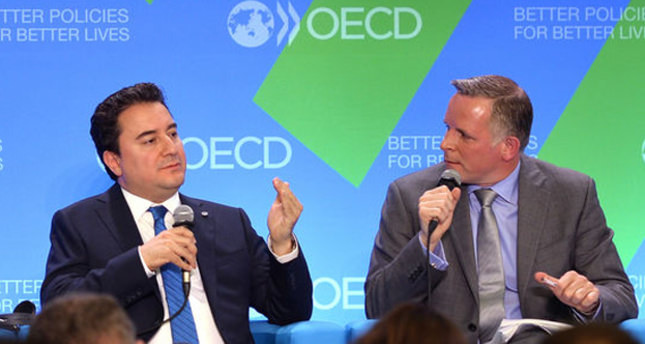 by AA May 07, 2014 12:00 am
PARIS — Deputy Prime Minister Ali Babacan praised emerging economies such as India, Brazil and Indonesia for taking "the right steps in the right directions" to reach economic recovery.

Speaking at a ministerial council meeting of the Organization for Economic Co-operation and Development on Tuesday, Babacan emphasized that the worst of the turbulent times following the global economic crisis of 2007-2008 had passed.

Babacan said, "There is a recovery especially in developed economies. Many countries were hopeless. But at last recovery has started to take place." He added that the level of sustainability of growth in the emerging economies was unclear, and he expected average growth for the next decade to be considerably lower than the previous one.

"However, we see the average growth of emerging economies is still higher than developed countries. A major part of global economic growth and activity comes from these countries," he said. Stressing that the public debt figures of the countries was lower compared to the 1990s, he said the emerging economies had much more robust banking sectors now and they utilized flexible currency rates to absorb the shocks.