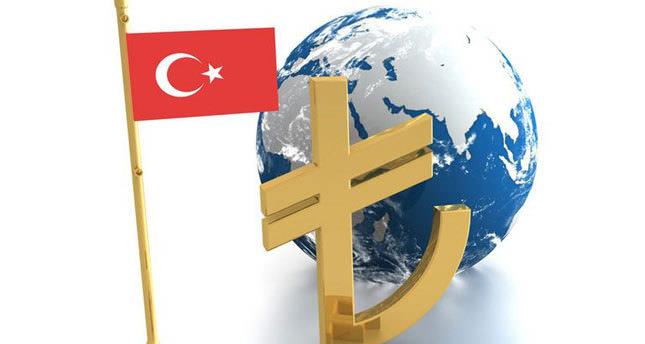 by AA May 16, 2014 12:00 am
ANKARA — Turkey's current account deficit (CAD) is expected to decrease due to the "two-tier" credit policy implemented by the country's central bank, according to a senior economist from Ziraat Investment House. This "two-tier" credit policy entails allowing banks' commercial loans to grow, in an attempt to support exporters, while slowing down consumer loans.

The bank has said that the CAD decreased by $5.09 billion (TL 10.6 billion) in the period January-March to $60 billion. The cause of this decrease was due mainly to a $5.2 billion annual decrease in the country's foreign trade deficit and an increase in its service sector output. Bora Tamer Yilmaz, an economist with Ziraat Investment House, said: "We believe that Turkey's current account deficit will continue improving due to the country's savings gap, which makes domestic consumption dependent on credit growth. Having realized this, the central bank switched to a tight and disciplined stance in 2011, limiting the annual credit growth rate by 15 percent."

Another factor that affects the reduction of Turkey's CAD is the fluctuation of the Turkish lira. A low Turkish lira, as was seen during the recent plunge in January when the Turkish lira dropped to almost TL 2.4 to the U.S. dollar, helps Turkish exports compete in the world market.

However, this drop in value of the Turkish lira in January was also seen as possibly endangering the Turkish economy, which is heavily dependent on dollar and euro-pegged transactions and loans for the country's everyday business. Yet, a rise in the Turkish lira would have broad implications for the national economy, affecting Turkish citizens' lives in terms of cheap imports and low interest rates. Yilmaz on this said: "Although the main driver of the current account deficit is credit growth in line with general economic theory, net exports contribute positively when the Turkish lira depreciates. Finally, we have started observing the "J-Curve" effect on the current account balance.

Depreciation of the lira from the 1.80s in early 2013 to above 2.10 against the dollar contributes to external re-balancing as well." Turkish GDP is estimated to have increased by 4 percent in 2013, compared to 2.1 percent in 2012, and Turkey is aiming for a 4 percent economic growth target for 2014. "We have been of the view that the rate of change in the GDP will outpace the rate of change in the current account deficit. ... Re-balancing is a painful process that takes years. Rome was not built overnight. So the Turkish economy is heading in the right direction slowly but surely, "Yilmaz concluded.
RELATED TOPICS