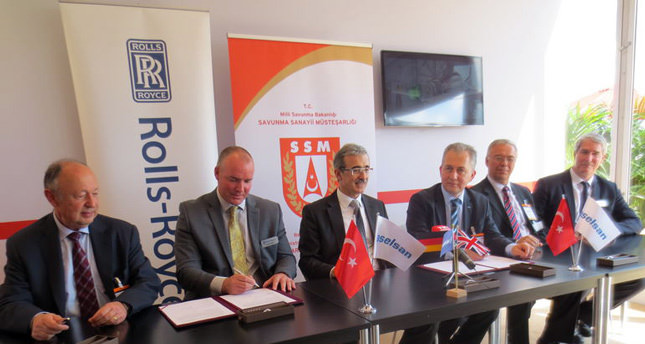 Hasan Canpolat, Chairman of the Aselsan Board, said "We believe that through this agreement, Aselsan and Rolls-Royce can create synergies and solutions that will bring benefits both in Turkey and to the wider global market."

Bob Stoddart, Rolls-Royce President of Customer Business – Defence, said that the company had very positive initial discussions with the team at Aselsan on opportunities around the areas of engine control systems and engine health monitoring and said that the MoU will allow for potential future collaboration.

"Turkey is an important market for Rolls-Royce and offers several exciting collaborative opportunities for our defence business in the areas of combat aircraft, helicopters and transport aircraft and the provision of support to our expanding engine fleet powering the Turkish Armed Forces," Stoddart said.

The agreement is aimed at gaining a distinct competitive edge in accessing new markets and further consolidating their position as leading avionics and aeronautics manufacturer.

"We are very happy that our collaboration with Turkey's leading defence electronics company is evolving in a positive manner," Marco Miklis, Airbus Group International Senior Vice President, said. "We strongly believe that both companies have competitive products and solutions which can be applied to the Turkish and export markets."

Ankara spent over $1 billion on defense, research and development in 2013. Turkey's defense industry has gained momentum in recent years, which has seen an expansion of local producers. More local firms have been introducing new products to the market, contributing to Turkey's goal of relying more on domestic sources than imported products.

According to data from the Defense Industry Exporters' Union (SSI), Turkey's exports in the defense and aviation industries combined reached $1.39 billion in 2013.
Last Update: May 22, 2014 5:29 am
RELATED TOPICS