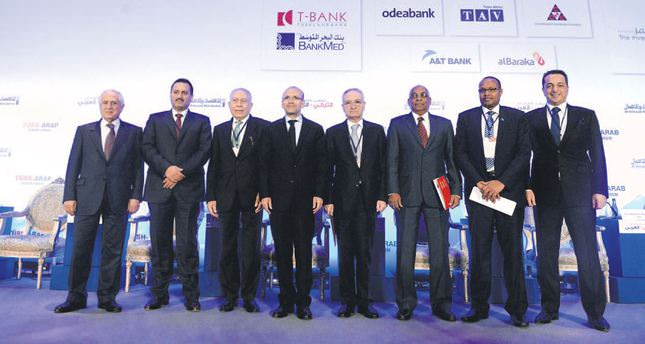 by AA May 29, 2014 12:00 am
ISTANBUL — Turkey hosted the ninth Turkish-Arab Economic Forum in Istanbul on Wednesday, an event which gathered foreign ministers, prominent public and private sector decision-makers and strategists from Turkey and Arab countries for a range of agenda-setting discussions.
Starting with a discussion on the economic challenges facing the Arab world following the aftershocks of the region-wide uprisings often referred to as the "Arab Spring," the forum sought to promote the stability and clarity which are necessary to move forward and explore investment opportunities in Turkey, particularly in the banking and real estate sectors.

Turkish Finance Minister Mehmet Şimşek said the forum is an excellent networking platform for those interested in investing in Turkey.
Şimşek said that Turkey serves as an efficient and cost-effective bridge to major markets across the Middle East and North Africa and a natural bridge for east-west and north-south trade. "Istanbul is becoming a global capital. We made significant economic reforms in Turkey. It is clear that political stability is a very important factor in Turkey's 10 years of success," Şimşek said.

Şimşek pointed out that as the Arab world wakes up, democracy, wealth and stability will spread. "The biggest problem in the MENA region is unemployment, but I think they will overcome it with economic reforms, similar to Turkey." Inviting Arabic countries to invest in Turkey, Şimşek added, "United we stand, divided we fall."

Ummaya Toukan, Jordan's minister of finance, said the forum played a crucial role in enhancing Turkish-Arab relations, which have been lagging for more than half a century. "Nobody can ignore that Turkey is a big international market. The economic relationships between Turkey and the Arab world are improving," Toukan said. "The Arab world needs Turkey as a financial hub to Europe and other parts of the world, and it can bring a lot of customers to invest." Indicating that the Arab world should come together and debate the relevant issues of the region, Toukan said, "Despite the political problems in Arab countries, I think economic growth in the Arab world will continue in a positive direction."

Turkish Finance Minister Mehmet Şimşek said on Wednesday that the inflation rate will fall after June. "Turkey's inflation rate will decline with the figures to be announced in June, but it will start to fall after June within the bounds of the predictions of the Central Bank of Turkey." Noting that based on principle, he does not want to comment on the politics of the central bank, Şimşek added, "I believe that the bank is doing its best for Turkey and will continue to do so. Therefore, the independence and credibility of the central bank is really important and critical for the country."

TurkStat said in April that Turkey's annual inflation rate accelerated to 8.3 percent in March 2014, from 7.8 percent one year earlier and 7.2 percent recorded in February 2014, as food and transportation costs increased to the highest rate in eight months.
RELATED TOPICS