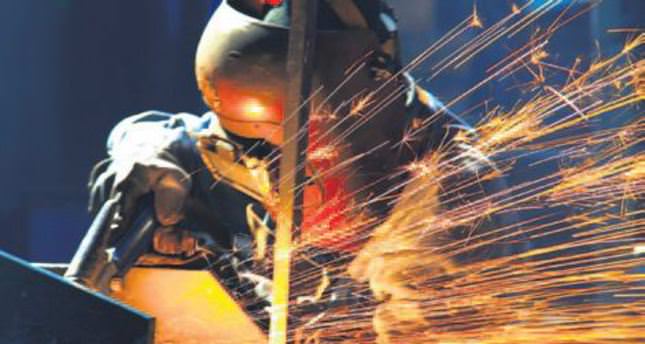 by Daily Sabah Jun 10, 2014 12:00 am
ISTANBUL — Industrial production increased by 4.6 percent, according to figures released by the Turkish Statistical Institute. While the mining sector led in growth with 9.3 percent, utilities were up by 5.8 percent, followed by manufacturing at 4.2 percent.

Turkey's industrial production grew more than expected in April 2014, according to data from the Turkish Statistical Institute (TurkStat) on Monday. The annual calendar adjusted industrial production index increased by 4.6 percent compared to the same month last year, beating the 3.5 percent expectation of markets while the monthly figure increased by 1 percent from the previous month. Mining output rose 9.3 percent in April, while utilities were up 5.8 percent compared with the same month last year. The manufacturing indices rose by 4.2 percent in March.

Speaking to Daily Sabah on the matter, economist and president of Nişantaşı University Dr. Kerem Alkin said that despite slighlty narrowing domestic demand, industrial production has risen crediting an increase in foreign demand. "Turkey's exports have been increasing, which has had a great effect on growth and industrial production especially from the beginnign of 2014," Alkin said.

He also added that over-valuation in exchange rates led Turkish industrialists to take a preference on domestic raw materials. This caused current account deficit to shrink. "Turkey used to be a country which imported component materials, then processed and export them. Now, Turkish producers choose domestic component materials," he said.

Veteran economist Hikmet Baydar told Daily Sabah that the increase in industrial production defied expectations. "Production has risen in recent months despite high interest rates and fluctuation in exchange rates.That means the market is confident and hopeful," he said. Baydar added that Turkey's economic soft spot is its current account deficit, however in recent periods Turkey has increased its exports, narrowing the deficit and increasing domestic production.
RELATED TOPICS