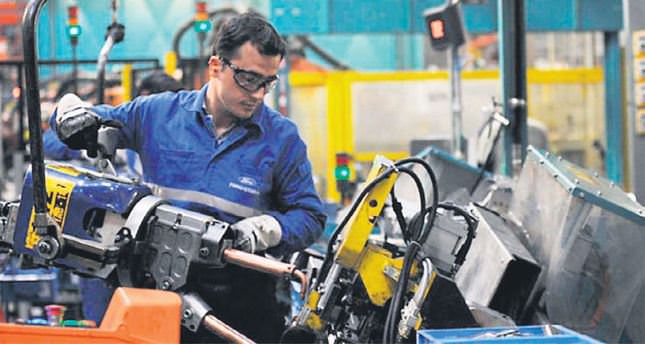 by Daily Sabah Jun 11, 2014 12:00 am
ISTANBUL — Turkey's gross domestic product (GDP) increased by 4.3 percent at inflation-corrected prices in the first quarter of this year, Turkish Statistical Institute said yesterday. GDP increased by 14.8 percent to reach TL 407.3 billion ($195.3 billion) at current prices compared to the same quarter of 2013. Analysts say it is a positive development that the growth in the first quarter exceeded expectations, and the forecasts for the whole year could accord with the Medium Term Program. Turkey's growth performance in the first quarter is broadly in line with medium-term economic targets thanks to market confidence and stability, Deputy Prime Minister Ali Babacan said yesterday.Babacan said that Turkey's strong growth performance is progressing despite the tapering of the quantitative easing program by the Federal Reserve (FED).

Shockwaves which followed this monetary policy caused sharp capital outflows, resulting in sizable currency depreciation in emerging economies. "Meanwhile thanks to macro prudential measures implemented since the beginning of the year, a strong rebalancing process has begun between foreign and domestic demand," he said. Babacan noted that the recovery seen in Europe is a positive contributor to both Turkey's export performance, and its increased growth rate by 2.7 points due to rising foreign demand while domestic demand was helped by 2.8 points. "Strong economic activity despite moderate levels of domestic demand is the result of confidence and stability in markets created by the implemented policies," Babacan said.

Babacan stressed that the economy, in line with its medium term target, has allowed for the creation of 5.7 million jobs. The country has seen a 6 percent average annual growth recorded since the peak of the global crisis.

Turkish Finance Minister Mehmet Şimşek evaluated the growth figures for the first quarter of 2014. "The Turkish economy grew more than our expectations, 4.3% on annual basis," announced Şimşek. "Despite the increase in political risk premium, monetary tightening policies and macro interim injunctions imposed by the regulations, Turkish economy showed a growth rate exceeding our expectations with 4.3 percent growth on annual basis. Although these factors increased the pressure on domestic demand, the recovery in our largest trade partner EU and competitive foreign exchange rates had a positive effect on foreign demand," said Şimşek.

The contribution of net exports to the growth is 2.7 percent during the first quarter of the year. In 2013, net exports had negatively influenced the growth with 0.7 percent, 3.4 percent, 2.2 percent, and 3 percent for each quarter respectively.

Stating that the figures of first quarter have reflected the growth model Turkey aimed, the analysts underlined the positive contribution of the net exports to the growth. They also added that the leading indicators and the industrial production data of April, which was announced yesterday, were also positive developments for the growth in the second quarter.

Special consumption and investment expenses have shown the weakest growth of the year," he said.

Sözer also said the slowdown in the current account deficit and the increase in savings would be estimated to go on next period. "After the growth figures of the first quarter, the market expectations regarding the growth rates for 2014 would be revised and increased.

Especially after the last decisions of the European Central Bank, the recovery of European economy and the upturn in financial conditions create an upside pressure, while the normalization process of the US monetary policy is forming a downside pressure. Within this framework, we continue to estimate that the growth in 2014 would be higher than the market expectations, which is 3.1 percent; and the risks are balanced under current conditions," he said.
RELATED TOPICS