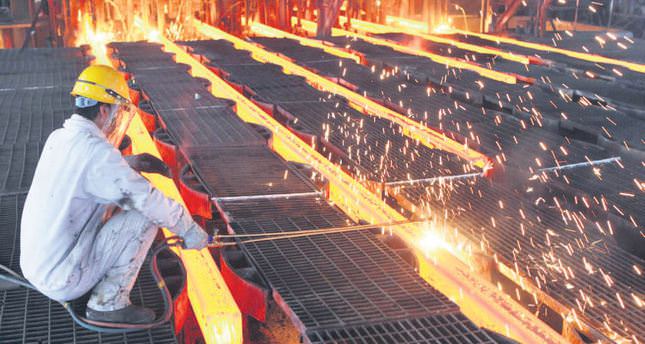 Latest positive figures in the first quarter signals that Turkish economy may lead WB to revise its predictions for Turkey's economic growth rate in the next year, says a senior official at WB

The World Bank (WB) lowered its projections for global growth this year, saying the Ukraine crisis, a harsh winter in the United States and political strife in several middle income countries had pulled down the outlook. The WB estimated global growth in 2014 at 2.8 percent, down from the 3.2 percent forecast in January. "Growth rates in the developing world remain far too modest to create the kind of jobs we need to improve the lives of the poorest 40 percent," World Bank President Jim Yong Kim said. However, Andrew Burns, a senior official at World Bank, noted on Wednesday that the WB might revise its growth forecasts upwards for Turkey, after the high growth figures for the first quarter of 2014 were announced on Tuesday.

Burns noted that as a result of the strong growth rate achieved in the first quarter, the World Bank's forecast on Turkey's economic growth might change.

According to "World Economic Outlook Report for 2014" of the World Bank, the growth rate for the Turkish economy was expected to be
around 2.4 percent annually; however, the real figures for the first quarter indicated a growth rate of 4.3 percent. When asked about the reason behind the difference in figures, Burns stated that it was possible to revise the figures upward. "The strong economic growth observed in Turkey within the first quarter is in line with our expectations," said Burns.

Burns further noted that the forecast figures for 2014 were held at a low level due to the base effect from 2013. "We take into consideration 2013 figures for establishing our forecasts for the next year. The lower economic growth rates in 2013 had a mathematically based effect for the next year.

The high figures achieved in the first quarter of 2014 in Turkey are promising that the hard times are over," Burns stated. Praising the economic growth potential of Turkey, Burns described 4 percent growth as a "very good rate." He added that rates should remain around this level and surpassing this level would bring about various economic instabilities and risks and therefore should be avoided.

Evaluating the interest policy of the Central Bank of Turkey, Burns noted that since the global balance is stable, the inflation-increasing effect of exchange rate depreciation would slow down and help decrease inflation rates. "A gradual decrease in interest rates might be expected. Of course, I cannot be the judge of that, but I believe our colleagues at the Central Bank of Turkey are closely following the current situation," added Burns.

He further stated that the emerging economies are expected to grow around 4.8 percent this year and they continue to be the driving force behind the global economy.

Burns also mentioned that as of this year, developed countries have started contributing more to global economic growth and are offering an increasing number of export opportunities for emerging economies.

The economic recovery in Europe would be highly beneficial for Turkish exporters, noted Burns and added: "The economic growth in Europe will ensure that Turkish authorities are faced with a reduced risk of foreign economic instability and may therefore close the current account deficient.

Turkish-type economic growth will depend more on foreign demand than monetary and financial incentives."

Citibank, one of the largest U.S.-based global banks, revised up its 2014 growth forecasts for Turkey as a result of the figures announced and the possibility that the Central Bank of Turkey will follow a more expansionary monetary policy. It increased the growth forecast rate from 2.2 percent to 3.5 percent.

Citibank further underlined that Turkish assets can benefit from the positive global outlook in the short-term; however, the need for major foreign financing is still keeping the economy fragile especially when sudden changes that may occur in the investor's trust are considered.
RELATED TOPICS