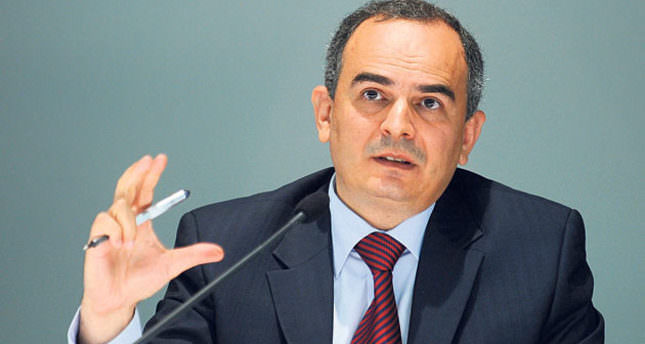 by Daily Sabah Jun 17, 2014 12:00 am
The governor of Turkey's central bank (CBT) hinted Monday that another small cut in interest rates is likely at the end of the month, but, a greater cut is not expected considering high inflation rates and high exchange rates, say economists. CBT's Monetary Policy Committee members will hold the meeting on June 24 and make a decision on interest rates. "A measured, moderate and gradual rate cut is being priced in," Erdem Basçı said in a speech in the central city of Konya. "We will do it as long as CBT continues to believe that inflation will decrease. But we will do it with caution, without upsetting the balances, without destabilizing," he said.

Last month the CBT, which had ramped up rates to fight a currency crisis, shaved one key rate but was criticized for being timid by
Prime Minister Recep Tayyip Erdogan.

Markets value an independent central bank as a better guarantor against inflation, which erodes the value of investments in government bonds as well as the value of a currency, compared to governments that are often focused on growth.

The May rate cut came after the bank aggressively raised key rates in January in a bid to halt a steep drop in Turkey's currency, the lira, which lost nearly a third of its value in two months."We also don't want high interest rates, but this is a policy tool for us," said Başçı.

Erdoğan has been concerned not to lose one of his key achievements: the stellar economic growth that Turkey has posted since his Justice and Development Party came to power 10 years ago.While Turkey's growth has slowed from nearly 9.0 percent in 2010 to 4 percent last year, the economy doesn't appear to have stalled from the interest rate hike. It grew at an annual rate of 4.3 percent in the first quarter of this year.

Speaking to Daily Sabah, economist Dr. Cemil Ertem said that if the CBT does not cut interest rates, it can be viewed as a challenge to government's fiscal and growth policies. "I expect the CBT will decrease the interest rates by 50-100 basis points, which may have a limited negative effect on inflation. However, in a short term Turkish economy can handle a limited inflation rise," Ertem said.

President of Nişantaşı University and an economist Dr. Kerem Alkin commented on the situation. Alkin remarked that the CBT has recently conducted monetary policies focusing on the value increase in the Turkish lira, which may seem reasonable for fighting against high inflation rate. "In consideration of domestic and regional developments like conflict in Iraq, Syria and Ukraine, upcoming presidential elections in Turkey, keeping the interest rates unchanged or cutting them by 50 basis points may be the most-likely option.

Nevertheless, in my opinion, even if inflation is boosted by high exchange rates in Turkey, to preserve the foreign trade balances U.S. dollar parity should stay around TL 2,14 - 2,18 level, which is only possible with an interest rate cut by 100 basis points," Alkin told. He also noted that a decrease of 100 basis points can encourage the private sector to invest more. "An decrease of 100 basis points in interest rates would have a limited effect on inflation, but will lead current account deficit to narrow and support the growth,"Alkin concluded.

Speaking to Daily Sabah, economist Hikmet Baydar said that the CBT will act cautiously on the interest rate issue. Emphasizing high exchange rates which boosts the inflation rate in the country, an interest cut which can lead exchange rates even gets higher is not a real possibility.

An idea clash between the Prime Minister Recep Tayyip Erdoğan and Başçı regarding the CBT's interest policies has been ongoing for a few months. In January, the CBT increased interest rates by 5 percent on average by showing global monetary trends and domestic political and economic ambiguities as a ground. The prime minister criticized the CBT's decision of increasing interest rates, as they constitute an impediment to investment. So he has said on every occasion that interest rates should be decreased. The prime minister indicated the immediate need for an interest cut by stating that the ambiguities were resolved and political stability now prevails in the country.

On the other hand, ministries dealing with economic affairs said the CBT is working independently and has taken the most suitable decision in the light of their data.
Last Update: Jun 17, 2014 1:12 am
RELATED TOPICS