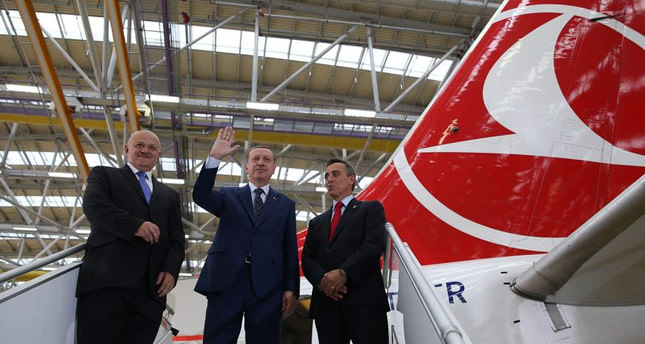 by Daily Sabah Jun 27, 2014 12:00 am
Prime Minister Recep Tayyip Erdoğan attended the opening of the Aviation Repair and Maintenance Center of Türk Hava Yolları Teknik A.Ş. at Sabiha Gökçen Airport in Istanbul. Stating how pleased he was since the $550 million investment was covered by the equities of Turkish Airlines, he hinted at a new initiation that will be started at Sabiha Gökçen. "With this project in which 3,100 people will work and with a possible turnover of around $500 million per year, we are turning a new page in aviation history," said Erdoğan.

Noting that with the commissioning of this facility, Istanbul is now becoming a center for repairs and maintenance work in the aviation industry, he added that he supports all the efforts Turkish Airlines is making to become one of the top 10 aviation companies in the world. "These initiatives are all complementary for the picture of Turkey we are trying to paint for 2023. I believe such projects will be exemplary for other companies as well," Erdoğan added.

Touching on improvements and advancements in terms of aviation within the last 12 years in Turkey, Erdoğan quoted Binali Yıldırım, the Transport Minister back in 2012 who said: "Airways will become the main travelling means of a nation. My citizens will all be able to reach an airport in half an hour." Stating how aviation used to be seen as a luxury in Turkey, Erdoğan noted how luxury bus firms are offering prices that are about the same as a flight ticket.

The prime minister said: "Previously, there were a limited number of flights to very few cities in Turkey. Now, Turkish Airlines has become a giant air carrier, which provides flights to the greatest number of destinations in the world. We have handled the questions of the aviation industry just as we did with other problems in Turkey. We generated our staff and practiced them immediately. We boosted the number of in-service domestic airports. Thus, the number of domestic passengers, which was 9 million in 2003, reached 76 million in 2013.

Erdoğan gave the good news about a new airport that is to be constructed between Artvin and Rize. He stated that airports that are being constructed in the Black Sea region would increase transportation alternatives in the region.

He also referred to the third airport in Istanbul and added, "This is a quite glaring project and an investment that will make significant contributions to the aviation industry and the economy. We are aiming to open its first phase on Oct. 27, 2017."
Last Update: Jun 27, 2014 11:38 pm
RELATED TOPICS