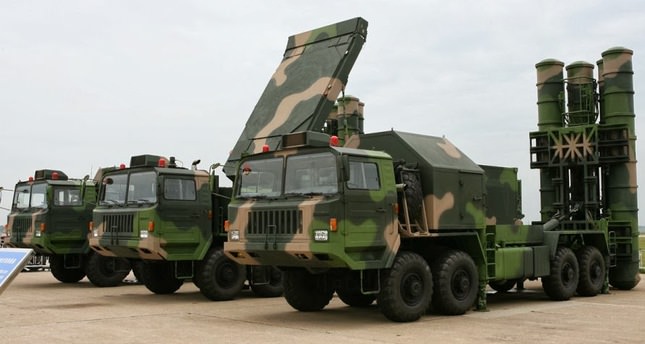 by Daily Sabah Jul 01, 2014 12:00 am
Turkey has extended by two months the deadline for a French-Italian partnership and U.S. companies' bids in a tender for a long-range missile defense system, a source familiar with the matter told Reuters yesterday. Last month, Turkish officials said the Chinese firm that won a provisional $3.4 billion bid had not yet met all the conditions and that Ankara might consider alternatives. According to sources, Turkey asked for a $300 million discount from the French-Italian partnership.

If the discount is granted, they might win the tender. It was provisionally chosen over rival offers from Eurosam, which is owned by Franco-Italian missile maker MBDA and Eurosam, and the Raytheon Co and Lockheed Martin. Turkish government officials announced they preferred the Chinese offer due to its competitiveness and potential for coproduction in Turkey.

Along with China, the U.S., Russia and the French-Italian partnership competed in the tender. Turkish authorities announced Russia fell out of the bid evaluation. The Chinese company has been on the U.S. State Department's sanctions list since February 2013 due to proliferation concerns. NATO countries also raised objections to Turkey's move, claiming missile systems within the transatlantic military alliance must be compatible. NATO insists the technology will not be compatible with the evolving ballistic-missile shield being built in Europe.

Although SSM officials announced that they preferred the Chinese offer due to its competitiveness, Ankara's decision raised concerns in the U.S. and other NATO countries. Since the announcement, the bidding deadline has been extended three times, and other bidding companies, Eurosam and Raytheon Co and Lockheed Martin, were given time to reconsider their bids until the end of June. All the bids were expected to expire today; however, once more the due date was extended by two months starting from June 30. Thus, Eurosam and Raytheon Co and Lockheed Martin can make their bids until Aug.30.
RELATED TOPICS